History feels like it should be a static, dusty thing that lives only in books. It is something you study in a classroom, disconnected from the present. We all experience history’s legacy in the present day, whether consciously or not, but generally as passive observers. For most, history is something that happens to you, not something you can affect. History is not supposed to reach out and summon you to participate actively – though it has done just that to tens of thousands of citizens of the central European Republic of Slovakia. 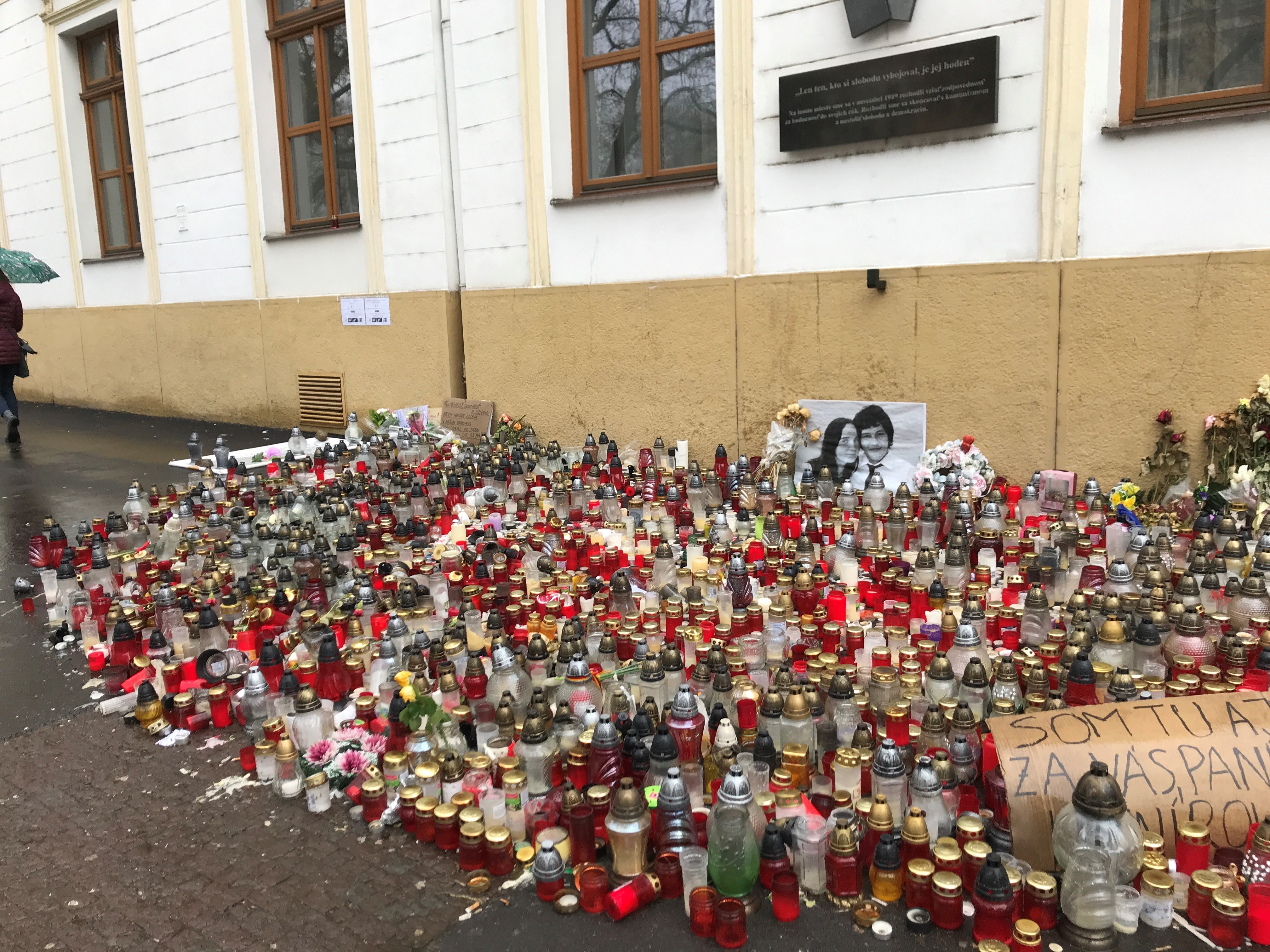 In recent weeks, Slovaks learned that history reached out and tragically touched one of their own – a 27-year-old investigative journalist named Jan Kuciak. Jan wrote primarily about financial crime, fraud and corruption, and had recently been investigating possible ties between high profile politicians and the mafia. Someone who did not wish the investigation to continue went into Jan’s home in late February and murdered both him and his fiancé Martina Kusnirova.

Slovaks reacted swiftly, with tens of thousands taking to the streets across Slovakia to express outrage, horror, and grief that a young journalist could be killed in a democratic country for having the audacity to speak against the crimes of the powerful. Street demonstrations have continued to grow in size and number inside Slovakia and in Slovak enclaves across Europe. The demonstrations peaked on March 15 with more than 65,000 people gathering in Bratislava’s Uprising Square for the largest demonstration since the 1989 Velvet Revolution. 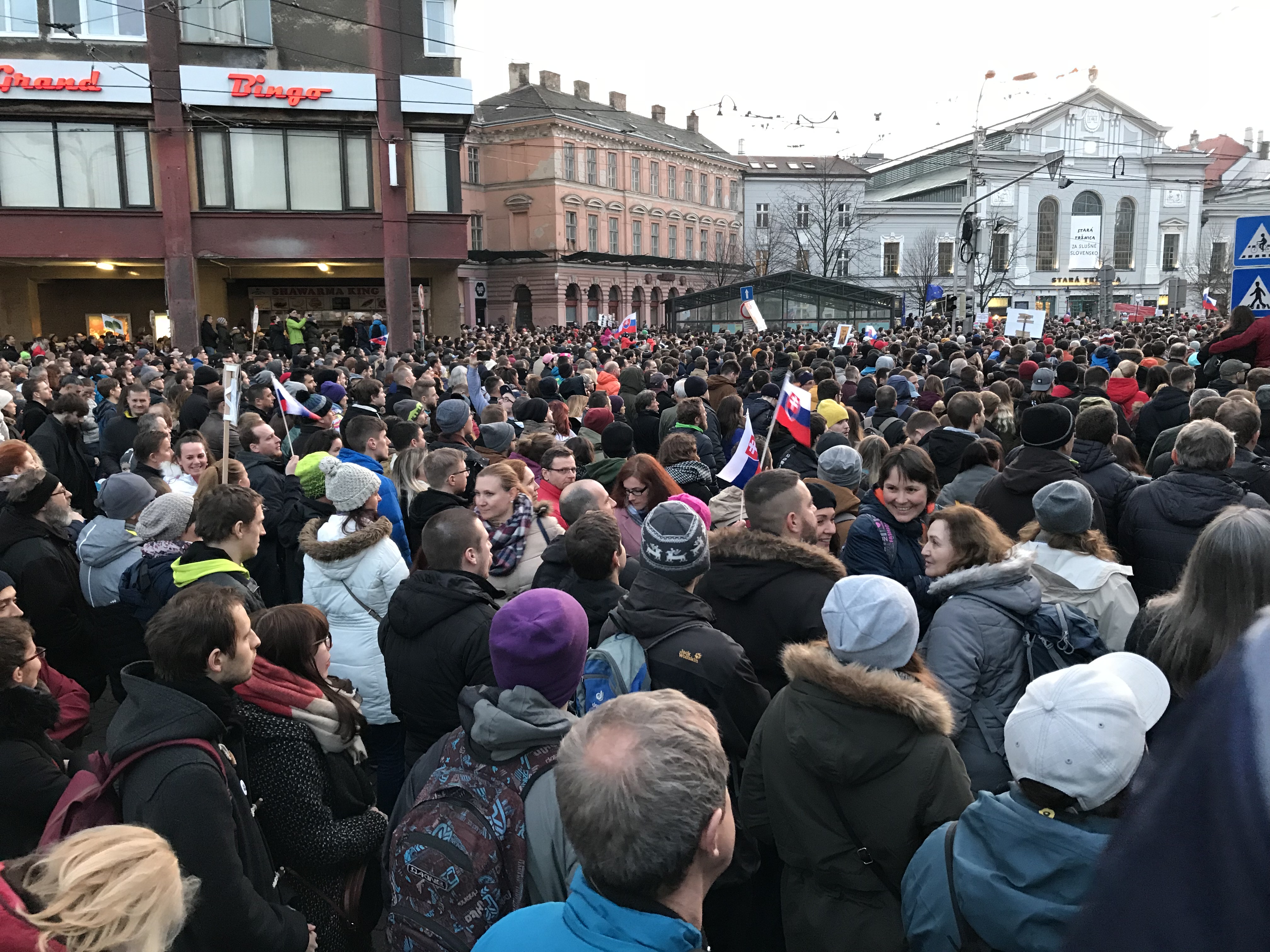 In a twist of timing, IRI’s Beacon Project held a series of focus group discussions in Bratislava exactly as these events unfolded. The goal of the Beacon Project is to push back against hostile influence campaigns threatening to destabilize Central and Eastern Europe. These campaigns undermine European democracy by inflaming social division, eroding trust in institutions and fomenting political chaos. To combat this problem, the Beacon Project works to expose the weaponization of information by showing how corrosive narratives travel and mapping which groups are likely to be receptive to those messages. The Beacon Project is less about directly confronting specific instances of disinformation, focusing rather on dismantling the underlying conditions that allow it to work, such as corruption, abuse of power and other ‘gaps’ in democratic governance. 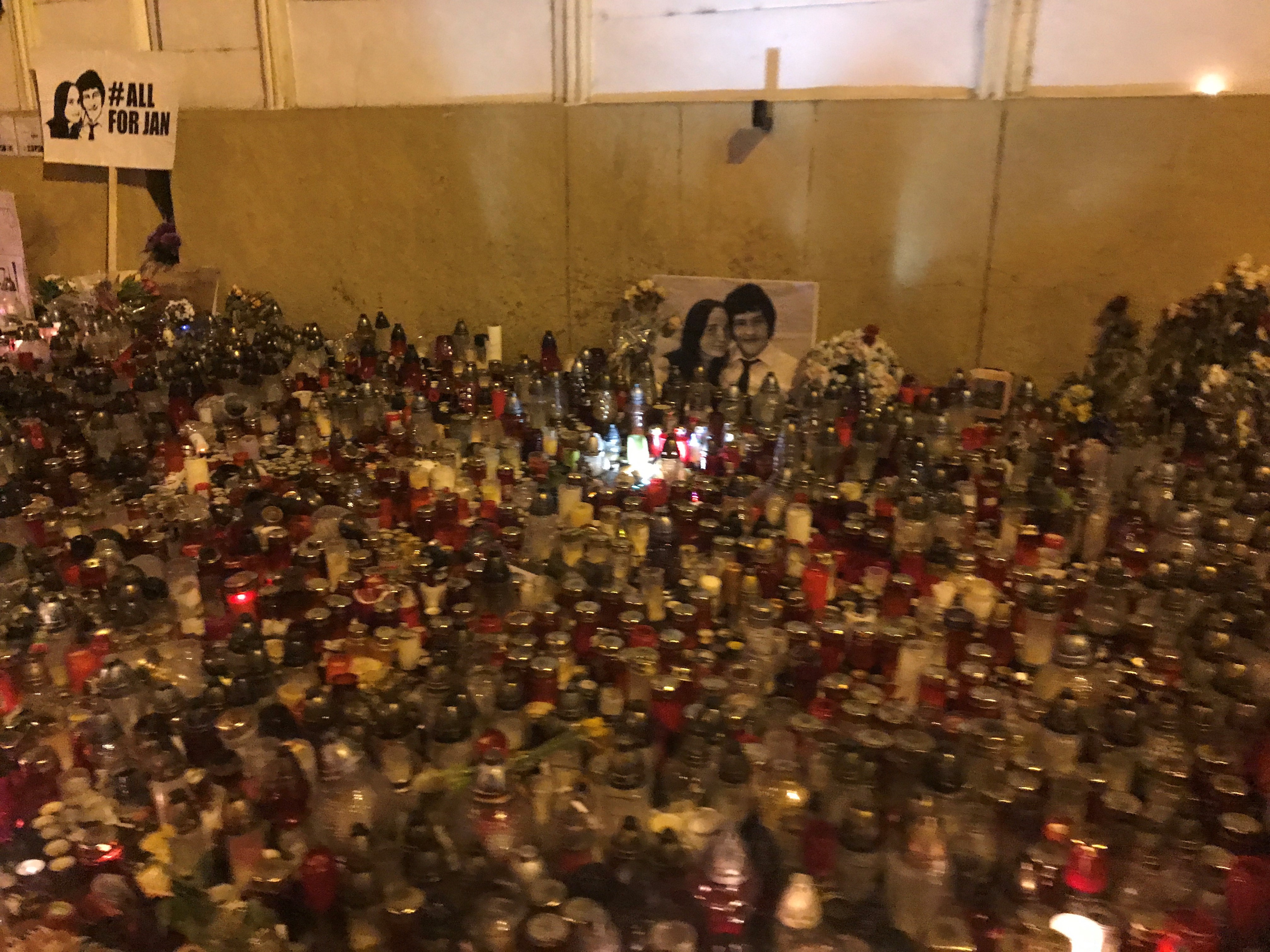 It was for this purpose that the Beacon team found itself in Bratislava during such an important national moment for Slovakia. IRI screened individuals who do not identify with any political extreme – the equivalent of swing voters – to take part in its focus groups and found a theme running through each discussion of a dull frustration that promises of becoming a mature democracy had not been fulfilled and a general feeling of social, economic and political stagnancy. Those who were adults under communism pointed to a slightly positive trend line since independence, while those too young to remember life under communism were more despondent over the lack of opportunity in Slovakia. Nearly every respondent felt greater optimism about the country before the murder of Jan Kuciak, but his killing had unraveled the feeling. All strongly wanted change but none could point to any political party or individual as likely agents of that change. 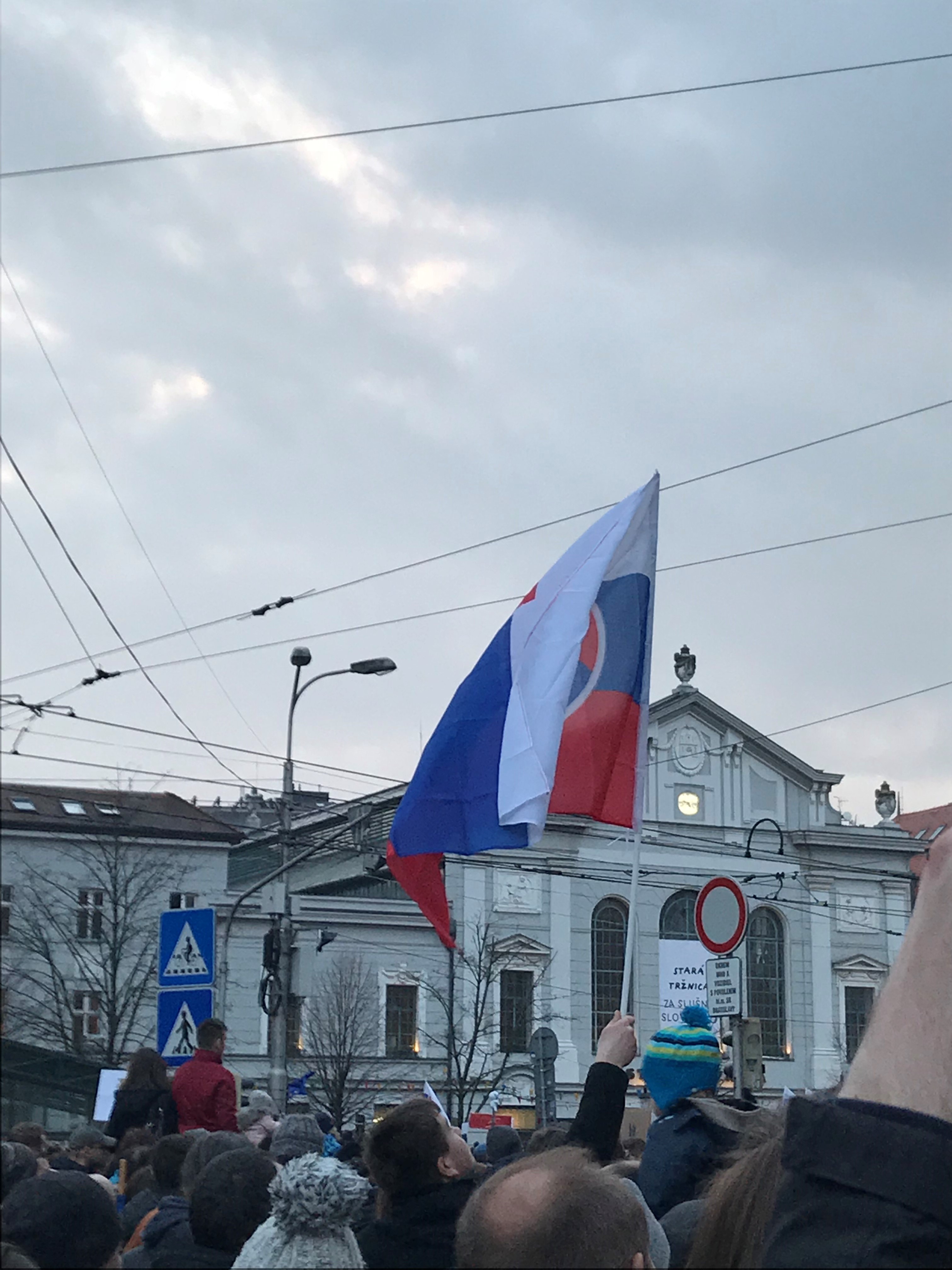 Assuming these sentiments are a representative snapshot of the wider country, it helps explain something about the intensity of the public reaction. People are not marching in the cold rain to support a specific policy outcome (though the events have already brought down the Prime Minister) as much as to refuse to sit passively while someone else decides their future. Behind the calls for change is the same desire for agency that drove Jan Kuciak and what drives investigative journalists all over the world to put themselves at risk. This festering frustration about the state of government in Central Europe offers a clear path for exploitation by hostile foreign and domestic actors. Precisely such conditions create a space for these actors to use disinformation and other various means to drive deeper wedges in our democratic societies.

Slovakia went through a turning point in its history 1989 and may be going through another now. Demonstrators understand that and are demanding to have a say in their future. They want to take action, even if that means going out on the streets or wearing a memorial pin or adding another candle to the thousands of candles that line public squares in Bratislava memorializing a young family who became a symbol for a young democracy fighting to write its own history. 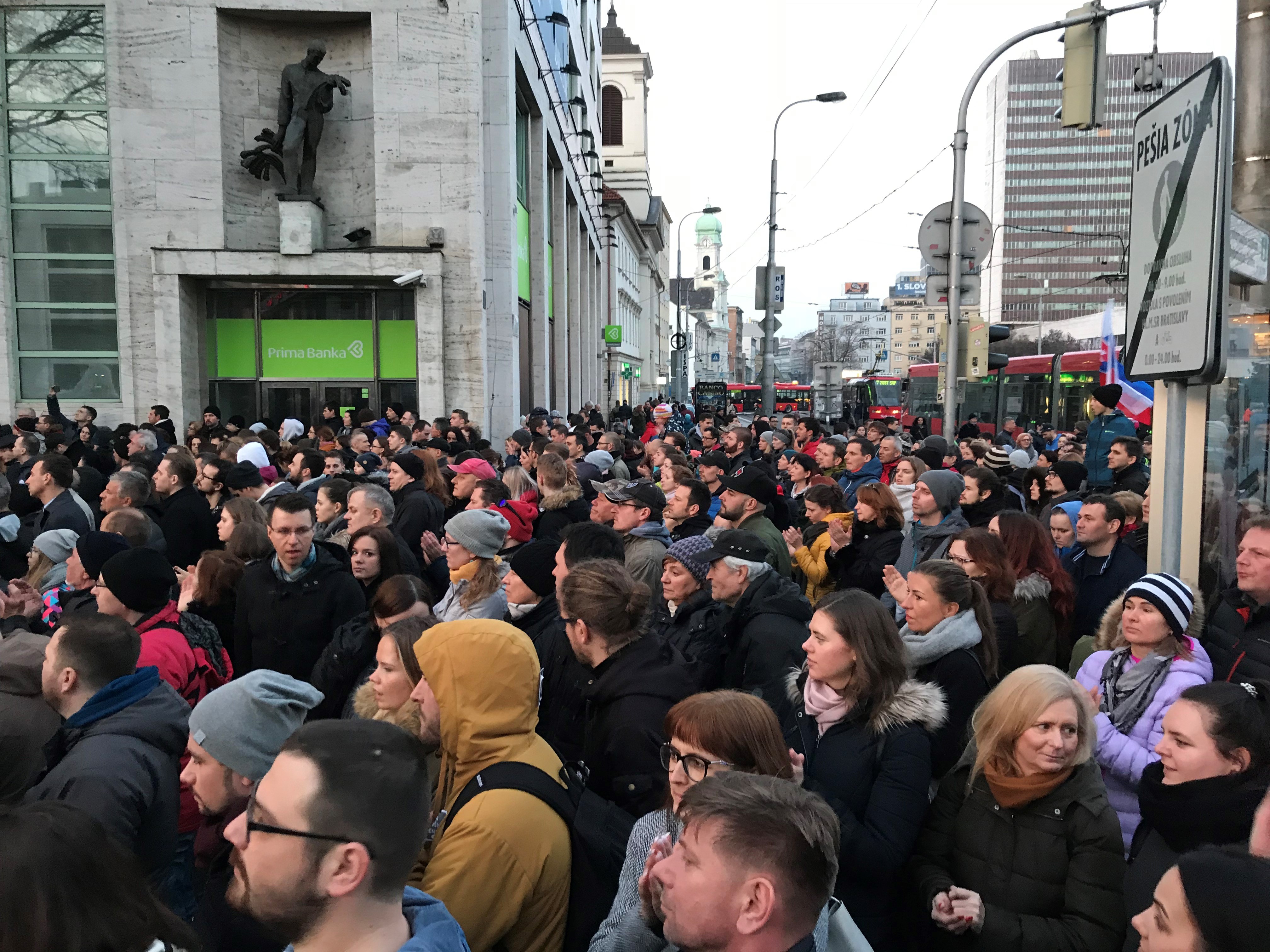