March 11, Colombia had its first election following the 2016-peace accord that ended some 50 years of internal conflict.  It changed the legislative landscape by allocating 10 mandatory seats to the former FARC guerrillas (now called the Common Alternative Revolutionary Force).

Overall, the process appeared peaceful, with few reports of violence and minor irregularities. The contest had two components:  presidential primaries for some factions and congressional elections.   Both reflected current political trends in the run-up to the first-round presidential election to be held May 27.  Center-right candidate Iván Duque prevailed in the presidential primary contest, and center-right coalitions won a majority of congressional seats. Some 3,000 candidates from 16 political groupings ran for Senate and the House of Representatives.

Here are key points you should know about the results:

Colombia’s center-right and center-left parties held primaries to determine who should advance to the May 27 presidential first-round vote.  However, there were other presidential candidates, who did not participate in primaries, but who may also compete in the May 27 first round.  Among those competing in the internal primaries on March 11 were:

Voter turnout was strong. So much so, that in large urban areas such as Bogotá, Medellín and Cali, voting tables for the Gran Consulta ran out of ballots by noon. Electoral authorities solved the problem by authorizing the centers to use photocopies.

Currently, the Colombian Senate has 102 seats, 100 for national circumscription and two for indigenous districts. The new Senate will have five additional seats for FARC members, a transitional measure specified in the 2016 peace agreement.

The results were a good yardstick for measuring political party strength. Beginning next July, Uribe’s Democratic Center party will have the largest caucus in Congress, keeping 19 seats from the 20 it had before, followed by Radical Change Party which had generally supported President Juan Manuel Santos. The “U” Party, founded by President Santos, dropped from 21 seats to 14, possibly a result of voter fatigue with the governing party. The Liberal Party, friendly to the current government, also went from 17 to 14 seats.

Former president Alvaro Uribe (the top vote getter) was reelected to the Senate with 875,554 votes. The second most popular senator was Antanas Mockus, former mayor of Bogotá and running under the Green Alliance, with 540,783 votes.

The Chamber currently has 166 representatives, 161 of them are district seats, and five are set aside for special districts—for Colombians abroad; for Caribbean grassroots communities; for indigenous districts and two seats for the country’s afro- Colombian population.  This July 20, six more seats will be added, one for the vice-presidential ticket that comes in second place and five seats for FARC as specified by the peace accords.

The new face of the lower House differs somewhat from the Senate. Here, the Liberal party obtained 35 seats—down from 39. The Democratic Center won 32 seats, up from 19.  Radical Change followed with 30 seats, up from 15.

Overall, the new Congress establishes a new political map with many young faces but no clear majorities, although center-right parties hold the most seats. Thus, the next president will need to build consensus and generate alliances to pass legislation.

This was the first election where former FARC guerrillas could run for office. Although the accord granted the FARC 10 seats—five in the Senate and five in the House—the FARC decided to seek other, competitive seats and registered 23 candidates for the Senate and 13 for the House.  It won none of those competitive races.

Overall, the FARC obtained 32,636 votes for the House and 52,531 for the Senate, around 85,000 in total, representing 0.4 percent of the voter turnout. Under normal circumstances, any party that does not reach the electoral threshold of two percent of the valid votes would lose its registration. However, the peace accord grants FARC registration for two electoral cycles, that is, until 2026. So, it has another chance to remain viable.

The final sprint towards the presidency began the day after the legislative elections. Political parties are now evaluating the results to decide on alliances and party aggregation. These electoral alliances probably would not align based on ideological affinity, but rather on their ability to combine votes.

Although the center-right Democratic Center and Conservative parties had a significant win on the March 11 election and together could bring their ticket led by Iván Duque to the second round, individual senators and members could decide to support a different ticket.

The winner of the center-left primary, Gustavo Petro, appeals to the youth and those tired of “traditional” politicians. Petro is the former mayor of Bogotá, Senator and member of the 1980s M-19 guerrillas, and although he has been leading in polls for the presidency, his Senate list only won four seats. He would need to form a broader alliance to improve his chances in the May 27 first round.

Germán Vargas-Lleras did not participate in a primary, but his Radical Change Party had a good turnout in the legislative races.  Formerly President Santos’s vice president, he is trying to distance himself from the current administration.  Many believe that he will need a strong vice-presidential candidate in order to strengthen his ticket.  He recently chose former defense minister Juan Carlos Pinzón, who brings support from the Conservative and Unity parties and comes from a military family.  Vargas-Lleras and Pinzón have extensive government experience and neither have faced corruption charges.

With the presidential primaries and congressional elections concluded, the May 27 presidential vote and potential June 17 run-off mark the next critical junctures for Colombia.  A more conservative turn in the next administration and congress could mean changes in peace accord implementation.  Aside from that, the new government will face several challenges:  1) finding a way to revive a sagging economy, 2) directing decentralization efforts toward a fresh relationship with rural territories, and 3) developing consensus among new factions in the executive and legislative branches. 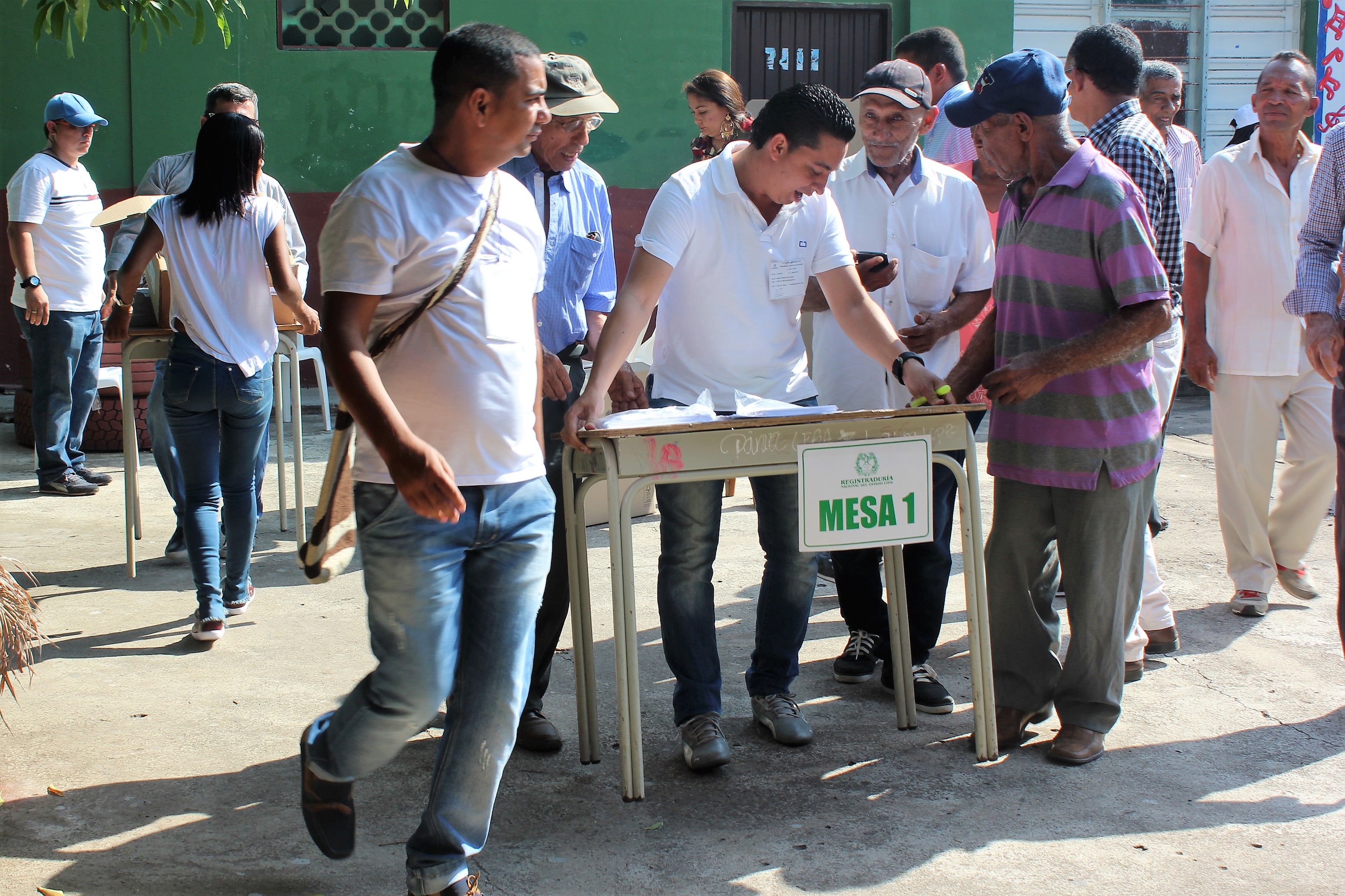