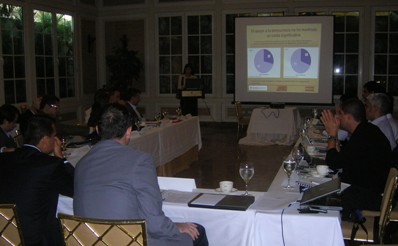 political parties is the design and analysis of substantive policies aimed at addressing social and economic needs.  Political debate in the region is most commonly dedicated to discussions about personality, values and rhetoric, offering average citizens little information about policies, ideas or governance strategies.

To help think tanks in Latin America address this challenge, IRI gathered think tank leaders from Latin America, Spain and the U.S. to analyze eight of the most important issues facing the region and discuss ways to develop substantive policy ideas to address them.  Setting the tone of the event in the first presentation, Georgina Pizzolitto of the Latin American Public Opinion Project at Vanderbilt University provided recent public opinion research from the region and explained that, “according to our research, there has been a democratic recession in Latin America developing over the past four years which is being felt more acutely by citizens in the region now than was felt at the end of the Cold War.”

Two think tank experts from Spain’s Foundation for Social Studies and Analysis and the United States’ Heritage Foundation offered ideas for how think tanks can play a more effective role in developing and debating policy ideas with political stakeholders.

In order to further identify areas of research for future collaborative public policy, the participants spent more than 20 hours sharing experiences and expertise as they debated solutions to the key issues identified:  mass poverty, social inclusion, environmental challenges, healthcare, education, democratic participation, citizen insecurity and economic and fiscal policies.  During this time, participants shared their experiences and voiced their concerns finding commonalities stretching from Argentina to Mexico.  One participant commented “[w]hile our opinions are diverse, we face many common problems.  Through collaborating, we will have a greater chance for creating public policies that work.”

At the end of the event, the participants agreed to collaborate in the coming months to develop substantive policy proposals that could address these issues.  IRI will coordinate these efforts and will facilitate the publishing of a public policy paper on each of the eight thematic issues.  These papers will serve as a resource for think tanks, political parties, candidates and elected officials in the region to guide substantive political discussion in Latin America, creating opportunities for more constructive dialogue and debate that is focused on responding to citizen needs.