Libya made headlines with the ousting of its strongman, Col. Muammar Gaddafi, and the turmoil that followed in 2011.

The state, reeling from a civil war, humanitarian crisis and the threat of extremism, remains divided between the national recognized government, the Tripoli-based Government of National Accord (GNA) and the Tobruk-based House of Representatives. Armed militias control fragments of territory and both governments lack the legitimacy to create a stable political climate. All efforts to stabilize and unify the country to date have failed.

In addition, standard of living has declined and access to everyday services like water and electricity is sporadic. Power outages are frequent, and the cost of basic commodities and medicine have soared. The economy has dramatically deteriorated; almost the entire state budget is put towards a bloated public workforce, leaving minimal resources to improve state services.

The situation has worsened by a flourishing currency black market where the rate stands at around seven times the official rate. This gap has contributed to a liquidity crisis and fueled corruption, especially amongst militias that have profited despite fees imposed by the government on hard currency transactions. These are the same militias that have control of the capital and have now grown into criminal networks encompassing business and politics.

What is the solution?

Because national institutions are flailing, local authorities need to play an expanded role in governance. Decentralization brings decision-making closer to the citizen and secures long-term stability. Law 59 created 99 municipalities across the country in 2012, but does not explicitly delegate duties or responsibilities to the municipalities, effectively restricting their powers and creating confusion. State agencies are still responsible for delivering services directly, and there is widespread misunderstanding on municipalities’ functions.

Today, the roles played by municipal councils range from municipality to municipality. Some exercise expanded duties offering basic services despite the absence of a clear mandate, but the limited range of services delivered does not adequately meet citizen needs; many others are impaired by lack of capacity, expertise and funds. Tribes and militias frequently tax the councils’ meagre budgets and find ways to restrict their power. Detailed regulations and a clearer decentralization law for municipal councils could diffuse conflict and build legitimacy of the state from the ground up.

Local governance can indeed play a positive role in nation and trust building. According to IRI’s 2016 poll, 55 percent of Libyans believed their municipal council was legitimate either “a great deal” or a “fair amount.” Even though their mandates ran out in 2018, municipal councils are still seen as legitimate/representative local actors, compared with elders/tribal leaders, parliamentarians, civil society and businessmen. Stronger decentralization and the extension of responsibilities to municipal councils would amplify citizens’ voices and contribute to enhancing stability and the legitimacy of governance in Libya. 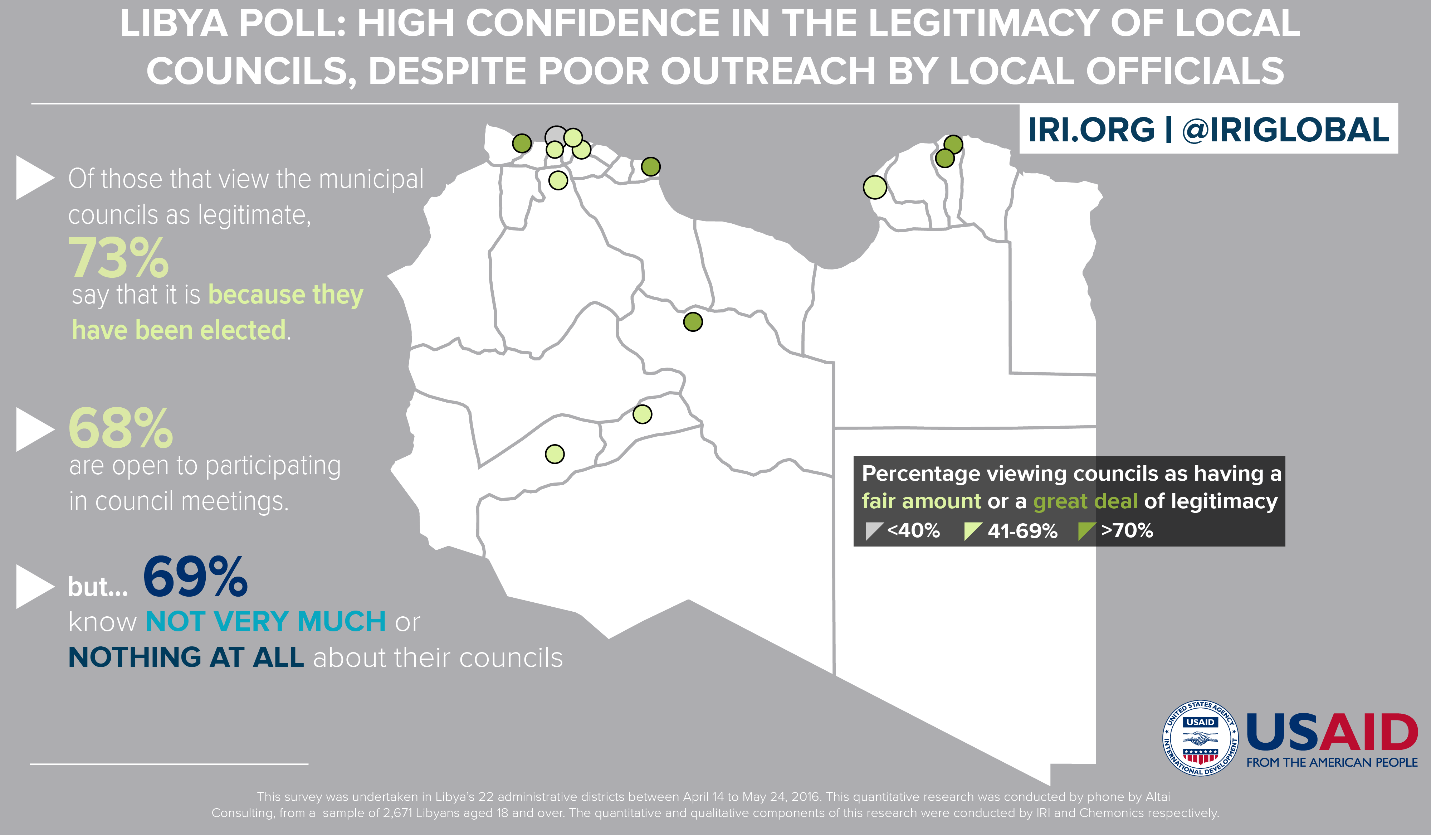 How is IRI Helping?

IRI has worked in Libya since 2012 to strengthen local governance. We partner with the Ministry of Planning to bring together representatives from various ministries as well as municipal councils from across the country, to discuss decentralization priorities and create a roadmap for addressing them.

Full decentralization remains mired by the unresolved political situation and habits of centralization. The outbreak of violence in September is an indication of the failure of Western policy in Libya. The GNA’s reliance on militias to secure order has backfired with the militias now battling for control, both political and of the territory’s resources, one of the vastest on the continent. These clashes have dashed any hopes of holding elections before the end of the year, which would have been a move towards political stability.

A move towards strengthening municipal councils would increase stability in Libya. With the country in a stalemate, local councils could make real change on a smaller-scale to respond to the basic needs of their communities—water, electricity, health care and education—despite national level complications. But they need to be empowered to do this.