Local Elections in Tunisia Are a Week Away. Will Tunisians Go to the Ballot Box?

After repeated delays, Tunisia will hold the first democratic local elections in the country’s history on May 6.

When I was in Tunis in February, I made a point of asking people I met if they planned to vote, and if so, for whom. My taxi drivers were, on the whole, rather cynical about the upcoming elections and unenthusiastic about voting in them. “Why should I vote?” they asked me, rhetorically. “I voted in 2011 and again in 2014 but the politicians did nothing for me. There is no point in voting this time; the politicians will again do nothing.” I tried to make the case to them that these elections would be different and that their geographic proximity to their newly elected local officials could help hold them accountable. They balked at this suggestion, saying that even if the newly elected officials want to institute good policies, the system will prevent them from doing so.

Over tapas and wine in Tunis’s old port of La Goulette, a medical student told me about her work in civil society, providing healthcare and sex education to underserved women. She had a passion for making her country and community a better place but was unconvinced that party politics was the way to do so. She voted for Beji Caid Essebsi for president in 2014 in what many secular Tunisians refer to as the “vote utile” or “strategic voting.” That is, they voted for Beji Caid Essebsi because they saw him and his party, Nidaa Tounes, as having the best chance to defeat Ennahda, a party that, at the time, identified as Islamist. Since then, she has been unimpressed with the government’s performance and was not sure if she would be voting this time around.

The disaffection with politicians expressed by my taxi drivers and by the medical student is representative of the views of a large segment of the population. In IRI’s most recent poll of Tunisian public opinion, fielded in late November, 84 percent of those surveyed said ministries and members of parliament were doing little or nothing to help people like them. The government did receive positive marks on keeping the country safe from terrorism but Tunisians are very frustrated with the state of the country’s economy. 89 percent of those surveyed expressed that the economy was somewhat bad or very bad and 61 percent believed the government was doing a somewhat bad or very bad job at creating jobs. In January, just over a month after IRI fielded its poll, Tunisians took to the streets in large numbers to protest fiscal austerity measures in the 2018 budget law. 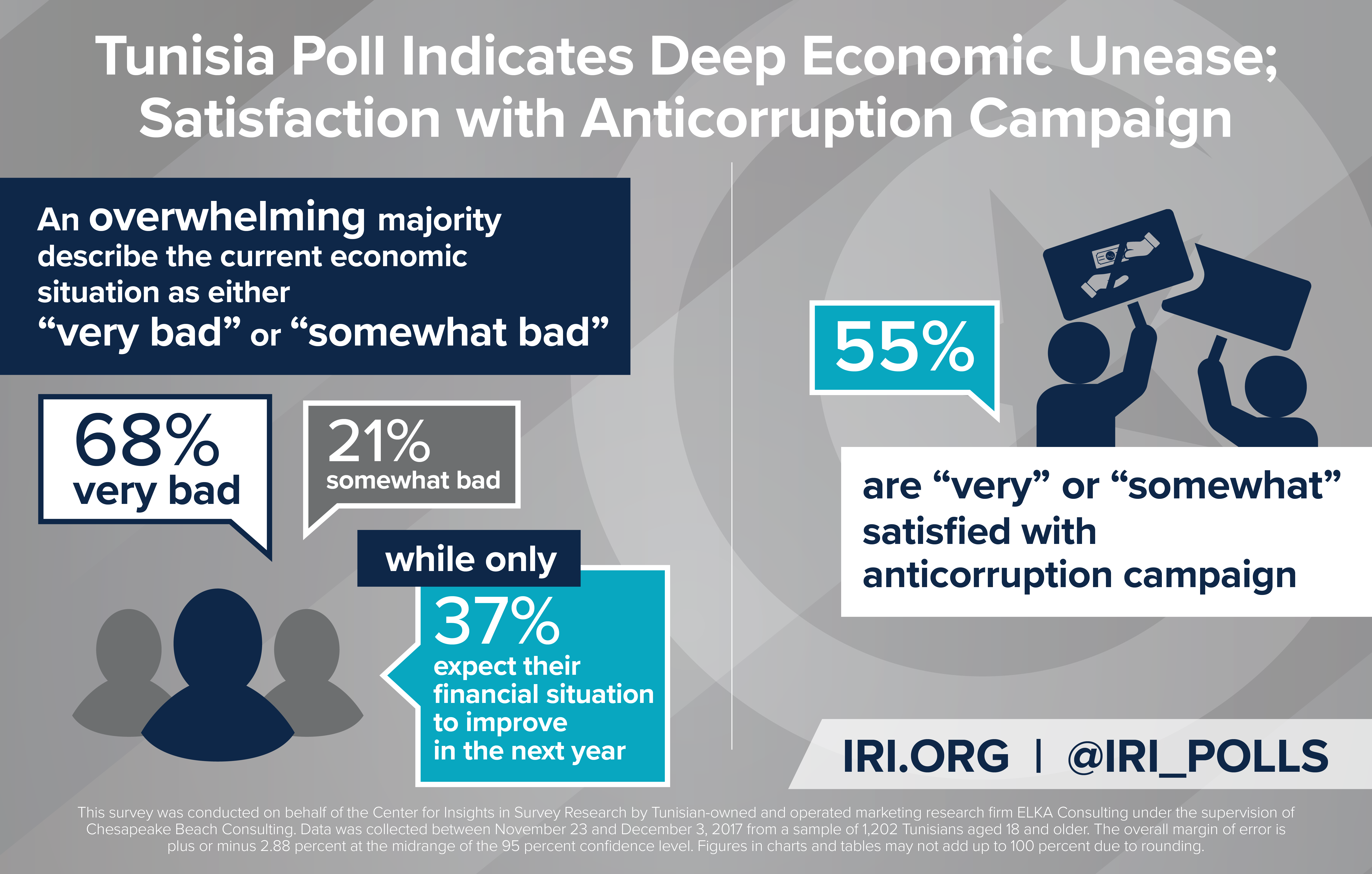 Yet, despite Tunisians’ disaffection with the country’s economy and the government’s performance, the data show that many Tunisians remain committed to the electoral process. 43 percent of poll respondents said they were very likely to vote in the upcoming elections, up from 30 percent in April 2017 and a further 15 percent said they were somewhat likely to vote. While only 40 percent of Tunisians said that voting gave them a say in how the government runs things, a further 26 percent stated that while they did not believe voting affected how the government ran things, they still considered it important to vote. Moreover, nearly two-thirds of respondents considered it very important to hold the elections on time. While most Tunisians remain very unfamiliar with the decentralization process, IRI’s data show that the public has become increasingly optimistic that decentralization will lead to economic improvement, less corruption, better services and better communication between government and citizens.

As local elections approach and the 2019 presidential and parliamentary elections loom on the horizon, Tunisians are undeniably disaffected and disillusioned with the state of their economy and, by consequence, their politics. However, a majority of Tunisians continue to believe in the importance of the electoral process. The challenge now will be for Tunisian elected officials to deliver positive economic change for those Tunisians who took to the streets in 2011 but who have yet to see their lives improve in a tangible way. Human patience is limited and for Tunisian democracy to last, it must deliver for its citizens before it is too late.