Decision-making processes in Morocco have long been dominated by gray-haired men.

In the last five years, however, this has begun to change. In the wake of Morocco’s 20 February Movement in 2011, Morocco’s King Mohammad VI called for comprehensive constitutional reform, a central focus of which was the inclusion of youth voices in politics. Leveraging this opening for more inclusive politics, IRI teamed up with Hit Radio, Morocco’s number one top 40 radio station, to conduct the “S’me3 Sawty,” or “Hear My Voice,” civic education campaign ahead of the October 7, 2016 parliamentary elections.

Across six stops in six regions, IRI and Hit Radio hosted two-day events that facilitated meaningful engagement between political parties and youth in order to combat the political cynicism that often keeps young people away from the ballot box. On the first day, the Hit Radio caravan, outfitted with a sound studio, stopped in public spaces and offered youth the opportunity to record video testimonials in which they could describe their perspectives on the elections and the issues that affect their communities as well as record questions for local political leaders. The following day, IRI and Hit Radio hosted debate forums that invited youth to engage with the local political and civil society leadership, taking questions from the live audience as well as featuring the video testimonials from the previous day’s caravan stop. 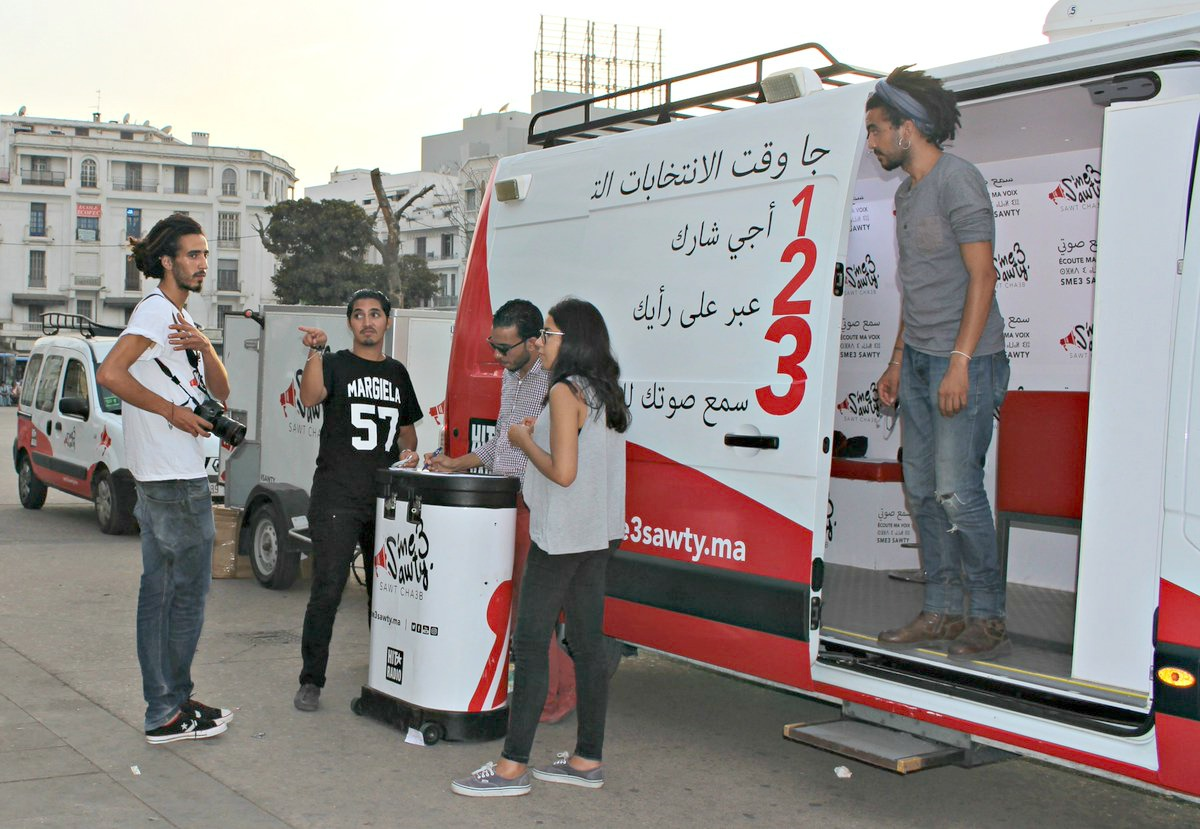 IRI also designed a straight-forward civic education pamphlet called “Who does what for you?” Available in French, Arabic and braille, the pamphlet covers the roles and responsibilities of various bodies across three different levels of government in Morocco (national, regional and communal). For instance, this pamphlet explains that the national government is responsible for national tourism, education and health, while communal councils are in charge of water distribution, electricity and public transport. By distributing this pamphlet at S’me3 Sawty events, IRI has increased access to basic information about how the government works for Moroccans who are often hard to reach. 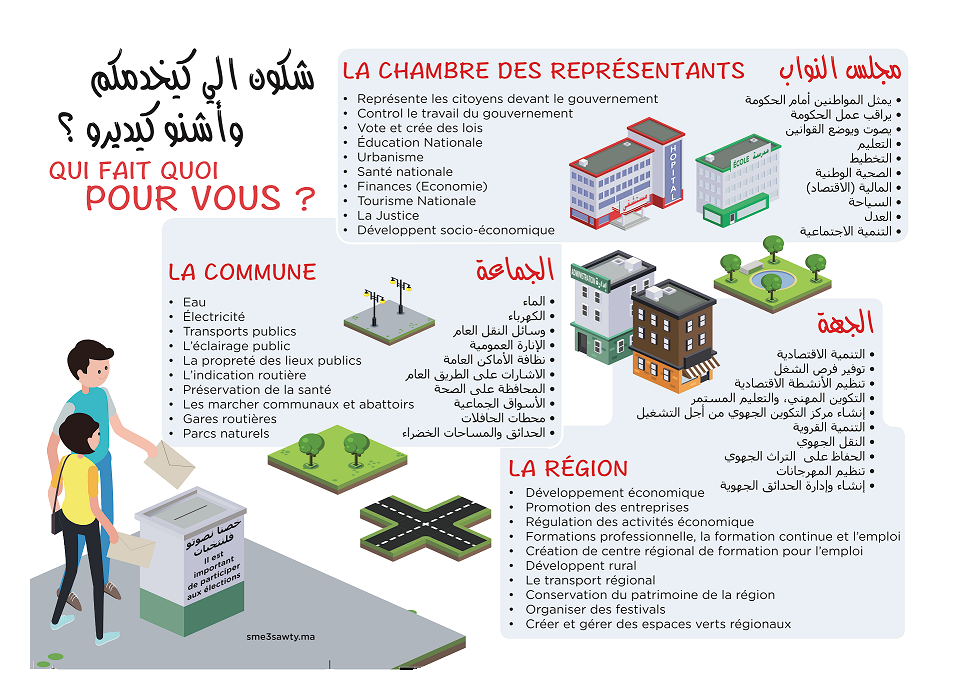 At each S’me3 Sawty caravan stop, participants recorded video testimonials about issues in their communities and posed questions to politicians to respond to at the following day’s debate. Over the course of two months and across six cities, IRI gathered 264 testimonials, including 193 from youth (40 of these were young women). Common themes that participants brought up include the need for increased quality health services, better employment opportunities for young people and better access to schools in remote areas. Hit Radio uploaded the videos to their social media channels such as YouTube, Instagram and their web portal for the campaign www.genertionlibre.ma, allowing candidates, political party members and government officials to hear directly the priorities and perspectives of average citizens.  Knowing the videos are part of the online discussion around elections helps young people feel that their voices are being heard by politicians and hopefully that these views will be taken into consideration when decisions are being made in Morocco’s House of Representatives. 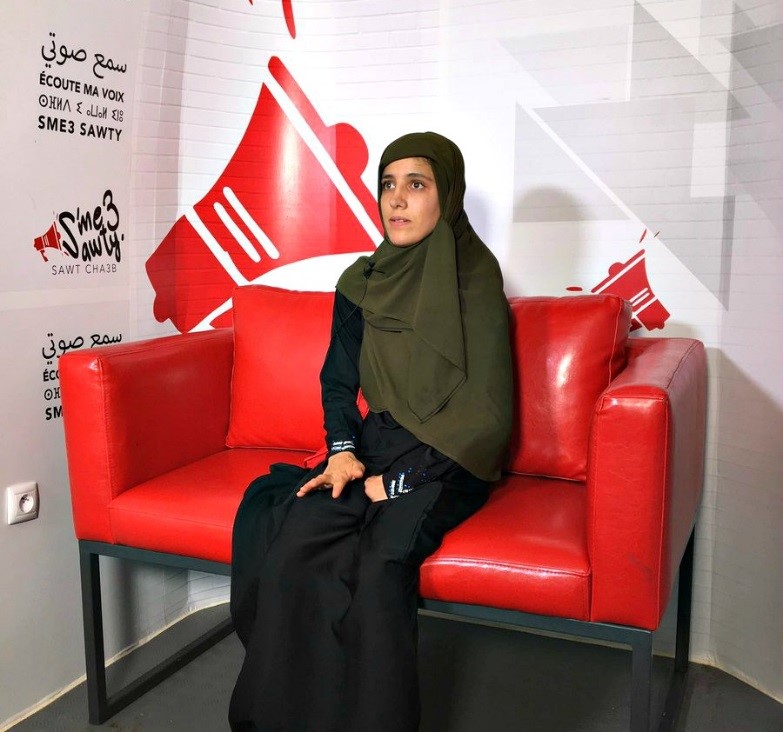 Following the caravan stop in each city, IRI and Hit Radio hosted a debate that provided a forum for youth to directly engage a panel of political party and civil society representatives on issues that hit closest to home. Aside from leveraging Hit Radio’s access to a large youth audience in order to pass civic education messages, the partnership allowed the campaign to capitalize on the presence of one of Hit Radio’s most popular radio personalities, Doc Samad, who moderated each debate. Samad’s participation attracted young people to attend the debates in person- a rare feat in the modern world where old-school debates are usually dismissed as boring and not worth a young person’s time.  In addition to being an opportunity for youth to share their priorities and concerns, the interaction at the debates also encouraged political candidates to run issue-based campaigns that are relevant to young people. In total, 660 audience members, including 570 youth took part in the debates.

In each of the six cities, the debate began with the presentation of some of the campaign’s video testimonials, prompting discussion amongst the panelists. Due to the face-to-face nature of the debate, political party representatives faced pressure to demonstrate how their party supports youth, explain how the platforms of their party’s parliamentary candidates respond to youth needs and make a clear argument how these platforms would be implemented in order to combat youth cynicism and distrust of political parties. Following the panelists’ reactions to the video testimonials, audience members had the opportunity to ask the panelists questions. Youth expressed their gratitude to Hit Radio and IRI for creating this opportunity to have a discussion directly with politicians, including one nineteen-year-old who emphasized, “You created a safe space for us to share our concerns and to listen to us, and I thank you for this. Today, we have a space where we can debate our ideas with politicians, and you convinced me to vote!” 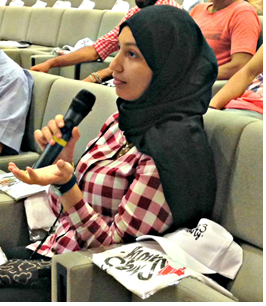