In November 2019, the Government of North Macedonia, with the backing of the International Republican Institute (IRI) and the United States Agency for International Development (USAID), launched the Open Finance Portal that publishes all state budget transactions. The e-portal, which is accessible to the public, represents a watershed moment for open data and budget transparency in North Macedonia, further strengthening the country’s democratic development.

In the past, citizens of North Macedonia had to submit formal freedom of information requests to access data on government expenditures. Acquiring this knowledge was a months-long process that often resulted in an all-out rejection of information. Indeed, the Ministry of Finance was considered one of the most closed ministries in the country. It regularly refused the information requests of civil society organizations and the media, thus robbing them of their ability to serve as government watchdogs and their right to fiscal transparency.

Today, tracking all government payments to private companies in North Macedonia is as easy as visiting a single website. Checking whether a company is the preferred supplier of multiple public entities and how much money it makes from each is only a click away.

Although still a developing democracy, North Macedonia has become a regional leader in budget transparency with the release of its Opening Finance Portal. The Open Finance Portal provides an unprecedented level of transparency of spending and allocation of public money by the state treasury—making this information available to all citizens, journalists and civil society representatives. 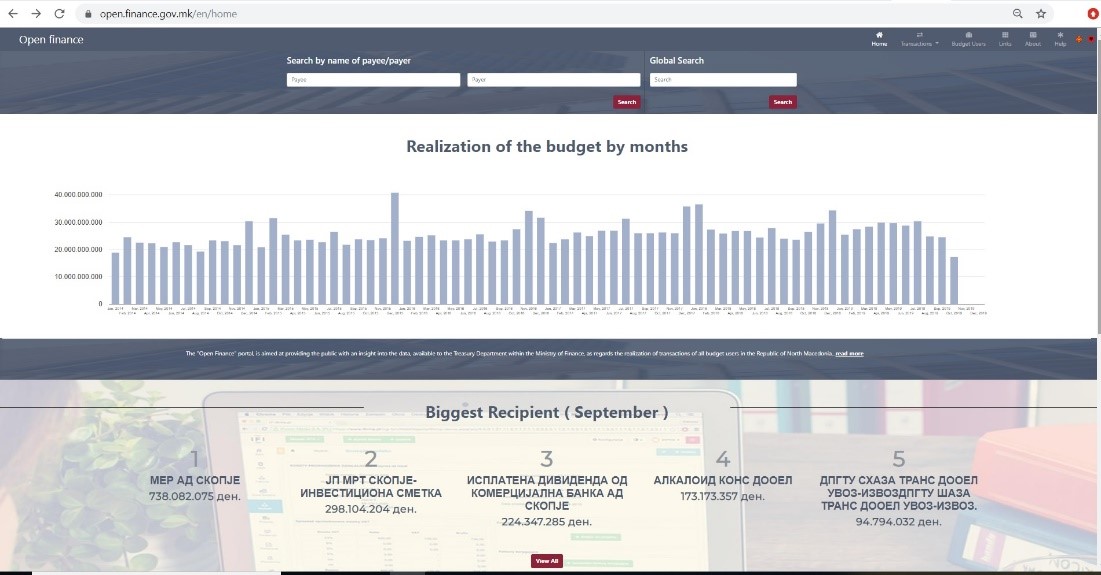 IRI has been a key partner in the two-year effort to launch the Open Finance Portal, and it is an important victory in our efforts to strengthen democratic governance in North Macedonia. In December 2017, then- Minister of Finance Dragan Tevdovski reached out to USAID and IRI for assistance in developing the portal. His decision marked a significant break from years of reticence by the Ministry of Finance and its nontransparent use of public money, as reflected in the country’s low ranking on the Open Budget Index.

IRI partnered with software engineers and civil servants from the Ministry of Finance to program, design and test the portal. Civil society representatives and journalists were deeply engaged in the process to ensure their needs were identified and insights incorporated early in the design phase, and played an active role in testing the portal—ensuring that it was developed in an inclusive and participatory manner.

The launch of the portal required policy changes as well so as to uphold citizens’ rights and protect their personal data while also making government spending as transparent as possible. To reconcile these two possibly conflicting objectives, the parliament adopted amendments to existing regulation allowing the release of this type of data. IRI assisted this process by bringing politicians on board to speed up the adoption of these amendments.

At the portal launch event, Nina Angelovska, the first woman to head the Ministry of Finance, underscored the importance of the portal in strengthening North Macedonia’s democracy. “Transparency is a basic tool of democracy. When people are afraid that their illegal activity will be caught they are less inclined to misuse power…When it is possible to find out which payments have been authorized by any minister, director or other official, through just a few clicks on a computer, their hands will be tied for the abuse of state money.”

With the Open Finance Portal, the government of North Macedonia has taken an important step toward budget transparency and open data—and the impact of this became apparent less than 24 hours since the launch. Investigative journalists have already uncovered discretionary payments the special public prosecutor paid to herself which she had previously obscured as classified information. The promise of this newfound scrutiny should help to deter such practices in future. IRI is proud to have been part of this momentous reform, and will continue to assist the Ministry of Finance in improving financial transparency so that public officials will be accountable to the citizens of North Macedonia.