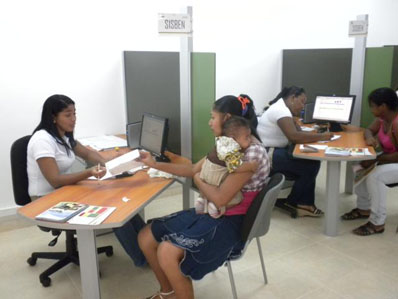 Local governments throughout Latin America, and especially in Colombia, have administrative and logistical barriers which prevent citizens from obtaining basic government services.  Unclear procedures, inconvenient municipal office locations, high costs of transportation, and lost wages due to extensive periods of time waiting in long lines being ushered from one bureaucrat to another are some of the barriers citizens have faced in trying to access government services.  Deterrents such as these have led to low levels and poor quality of interaction between local governments and its citizens; and in some cases are the reason for citizens not obtaining the services they are entitled to.

In order to confront this issue in Colombia, IRI has been working in Cartagena’s second district, Virgen y Turistica, to set up a De Una office or one-stop-shop for government services.  The office is a central place where citizens can access local government services and process needed government paperwork and documentation.  IRI partnered with the mayor’s office and provided assistance to streamline applicant processes for permits and other kinds of documentation provided to citizens.

In addition to supporting the design and organizational structure of the De Una, IRI helped the office personnel create manuals which lay out the necessary processes and documentation for common citizen inquires.  The manual is also used during preliminary consultations citizens receive immediately upon arriving at the De Una.  When a citizen arrives, he or she is immediately greeted by a De Una staff member who examines paperwork and explains what documents are needed to initiate processes to ensure that the individual waiting in line does not do so only to be told later that they have brought the incorrect documentation or do not have the necessary paperwork.  De Una staff have also been trained in customer service to maximize their efficiency in interacting with citizens.

The majority of citizens using services offered by the De Una are women.  Previously, women would arrive as early as six in the morning, followed by extremely long waiting times, without the guarantee of achieving the purpose of their visit.  With the De Una, these citizens will face shorter wait times and will be guaranteed access to municipal workers to help them address their request.  The shift in how government attends to its citizens could be seen immediately on the first day the De Una opened.  Many mothers and their children waited inside the air-conditioned office to be helped and left in a much shorter time.  Marcelina Silgado and her young daughter were very pleased with the change saying, “I’m happy because to do this [process before] I would have had to go to [other government offices] at least twice to get a resolution.”

The De Una is a part of IRI’s democratic governance efforts in Colombia which work to increase public officials’ capacities to implement policies and practices that respond to the community’s needs, improve service delivery and increase government efficiency and transparency.