In March 2019, Slovakia will vote for its fifth president since becoming independent in 1993. Around this occasion, the International Republican Institute’s Beacon Project is conducting online media monitoring using our proprietary >versus< tool. This allows us to gain a deeper understanding on how the various presidential candidates are presented and to detect and analyze any malign narratives or disinformation campaigns present.

Despite the limitation of powers and the president’s largely ceremonial role, Slovakia has a tradition of presidents with strong personalities who have often influenced governmental decision-making and, for better or for worse, set moral standards for society. This has recently been exacerbated by an increasingly polarized political debate following the brutal murder of investigative journalist Jan Kuciak and his fiancée in 2018, and consequent mass protests across the country.

Transparency, personal integrity, and decency are all values called for by protestors, and media have responded with intense scrutiny of presidential candidates. Presidential elections suddenly became a referendum about the future of the country, a choice between old and new elites and orders. However, do we know if all candidates are scrutinized equally?  Or is the candidate’s gender used to sway the public debate, and if so, why?

To date, Slovakia has not had a female head of state. This could soon change as Zuzana Čaputová–attorney, environmental activist and vice president of the Progressive Slovakia party– just received 40.5 percent of the vote in the first round of the election on March 16.  How do Czech and Slovak media report on the elections considering that, according to past Beacon Project polling in the country, 24 percent of Slovaks are more likely to vote for a female candidate rather than male (15 percent)?  Given the historical interconnectedness of the Czech Republic and Slovakia, including the media space, Beacon looked at a sample of 33 relevant online articles published in Czech and 200 in Slovak online media from March 1-3, ahead of the first round.

Czech media, as many as 20 out of 33 articles, were fascinated by the possibility of a woman becoming president for the first time in history of both countries.  A total of 15 articles reported this prospect in a neutral way and at least five were positive. 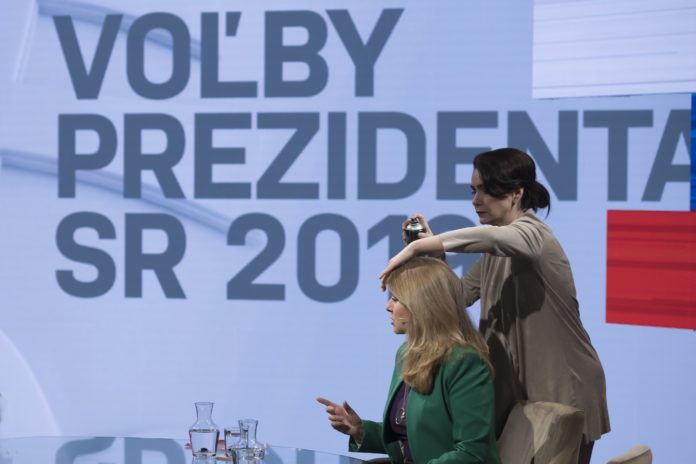 Comparisons were made between Čaputová and outspoken Czech President Miloš Zeman and words such as “decency,” “rebuilding of trust” and “moral example” were used to define her in contrast to Zeman. Some articles perceived the election of a female president as a milestone in the country’s political culture.

However, despite highlighting Čaputová’s accomplishments, 17 out of 33 articles contained gender biases in the form of different descriptions of male and female candidates. In contrast to male candidates, Čaputová was introduced through her age, hair color and family status (“Preferences of a 45-year-old Cutie” or “Divorced Mother of Two”) instead of her name. Some articles, even those supporting Čaputová, expressly evaluated her appearance using expressions such as “attractive woman,” “Majka” (referring to a Slovak series about a small girl from space), or even “a spectacular show with a sexy candidate in the lead role.”

In Slovak online media, 30 out of 200 articles used such diminutive language. However, unlike in the Czech Republic, these articles were largely used as a tool to explicitly undermine public trust (rather than producing entertaining content) regarding Čaputová‘s professional skills. Of these, 17 reported on a statement by Parliament Chairman Andrej Danko, who said that he was amazed to see an unknown young girl owe her success to good marketing.

Other articles assigned her success to the marketing of her looks, “Čaputová managed to fool [voters] with her pretty face, smile, and especially a massive advertising campaign.” She was also the only candidate whose personal relationships were closely examined in the media, stressing her divorced status and questioning whether she needs to marry her current partner to be a suitable presidential candidate for a majority Catholic country. This narrative was introduced in alternative media and further exacerbated on March 3 by the appearance of Prime Minister Peter Pellegrini on one of the main TV stations, in which he said “we shall think twice whether we want to let someone learn for the next five years how to be president” and continued to describe a hypothetical weak candidate naming adjectives previously used by other media to describe Čaputová.

Prior to the first election round, Czech and Slovak media used gender biases to report on a female candidate in both a negative, playing on stereotypes that women are less reasonable or less capable leaders, and positive way, women as a symbol of politeness, fair play and positive change. If it is unintentional, even positive commenting on candidate’s looks, rather than skills, might ultimately harm them. Where intentional, it may not always be disinformative and factually incorrect, but such malign narratives play on people’s emotions, discriminate, discredit and ultimately harm the political process by opening space for polarization exploitable by anti-democratic forces.  Therefore, if media want to support a change in politics and navigate voters in their search for a moral authority, they need to set an example for the whole society and avoid misleading and even diminutive language that harms the political process.