After five days of physical and mental battling, Ali Sawalmeh became the first Jordanian with a disability to reach the summit of Mt Kilimanjaro. The altitude and varying ecosystems, ranging from desert, to jungle, to snow, provide large challenges for the 30,000 people who tackle the climb each year. Ali, a participant in our Persons with Disabilities (PWD) Empowerment program, faced additional challenges scaling the mountain in a wheelchair.

Unable to ascend vertically, Ali had to curve around the mountain, a dstance of 28.6 miles. In addition to drastically increasing the length of the normally 3.66-mile climb, Ali even had to crawl, using his arms and hands to drag his body army-style, for approximately 0.25 miles.

Ali also fought a mental battle to reach the summit. He went through different emotional states as he climbed – sadness, satisfaction, frustration, wanting to go home. “I almost quit before reaching the top. But I didn’t,” he told a group of IRI participants during a PWD Empowerment training in Irbid. Along with two other Jordanians on his 13-member team, Ali raised the Jordanian flag at the summit after five days. 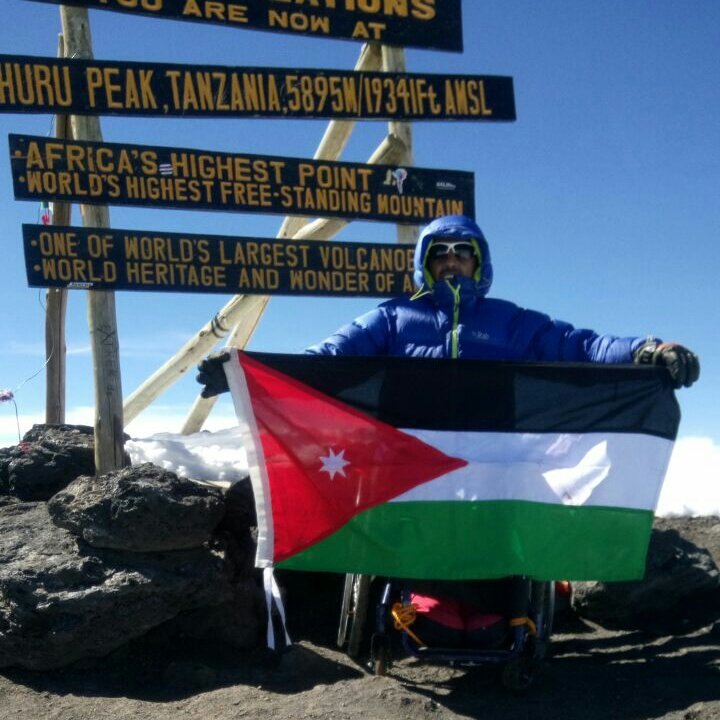 Jordan has a large and growing PWD population, and the community remains poorly served, particularly at the municipal level. The official PWD community is approximately 13 percent of the Jordanian population; however, many believe this number to be closer to 17 percent, or nearly 1 million citizens. IRI’s PWD Empowerment program helps people with disabilities build political advocacy expertise and communication skills enabling them to lobby for better protection of their rights and fight against discrimination. This approach allows participants to work critically on their situation and participate effectively in transforming it.

Ali recognizes the impact the PWD Empowerment program had on his accomplishment; it helped motivate him to attempt this feat. Sharing his success, Ali offered advice to his community at a PWD Empowerment session in Irbid. “Although we might face obstacles as PWD, we must always stay determined, and we must always persevere,” he encouraged.