Mongolia to hold parliamentary and local elections against backdrop of economic and political disenchantment. 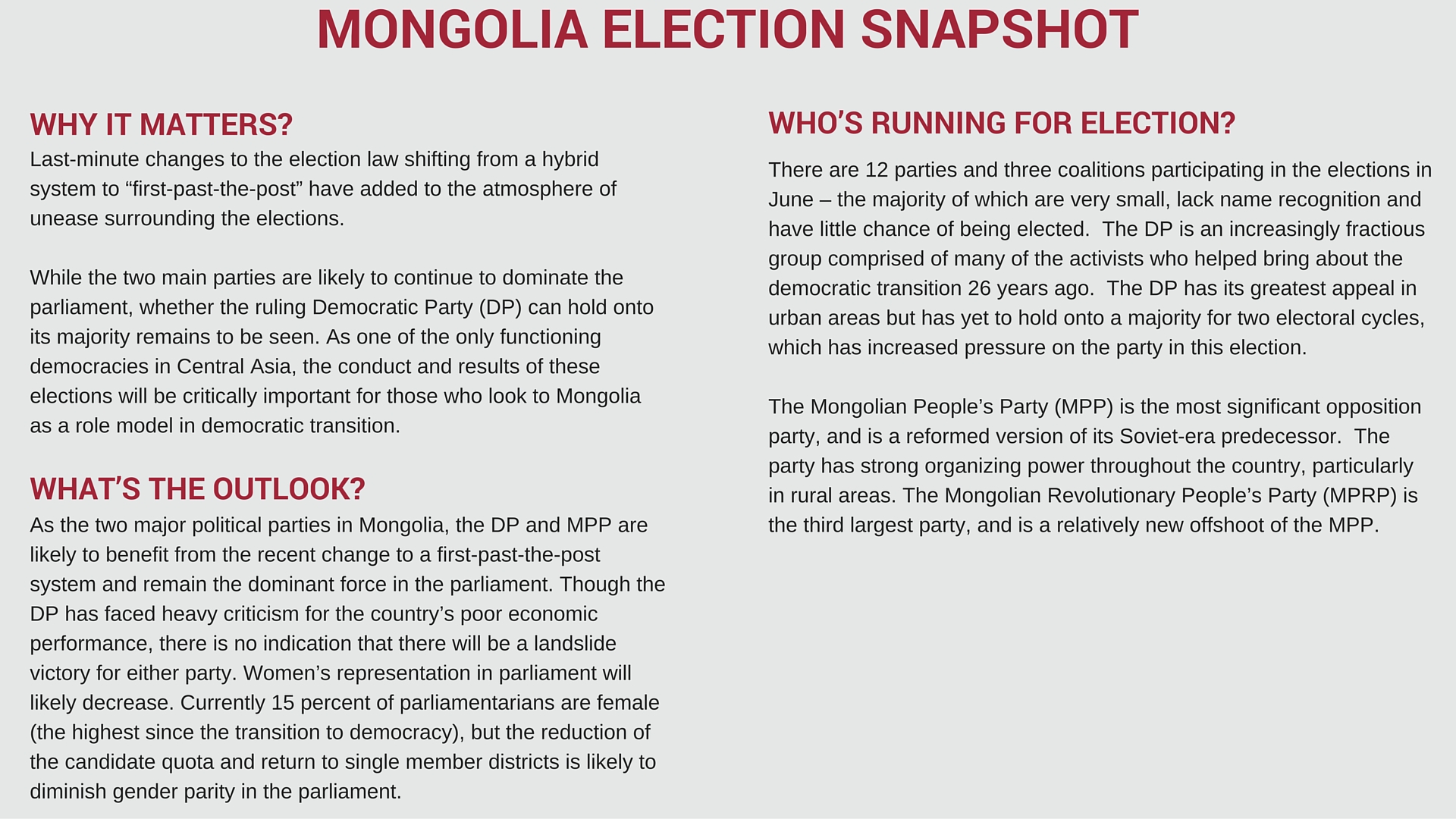 In May, the election law was revised to reduce the quota for women candidates for each party from 30 percent to 20 percent, reversing the increase passed in December 2015. Additionally, the electoral map changed from a hybrid election system with 48 direct  and 28 proportional mandates to a method where all 76 seats are gained through first-past-the post races.

The election law was revised twice in seven months—first in December 2015 to consolidate three laws governing each level of elections, and in doing so, a critical clause was “overlooked” that prevented further changes to the law six months prior to the elections. Critics charge that this enabled the two main political parties to consolidate their odds of holding onto power by reverting to the first-past-the-post system. The government has also been criticized for the rapid redistricting, which some say has created a gerrymandered system that favors those parties’ strongholds.

The political debate over foreign investment and control of Mongolian natural resources has also informed this election cycle. Under the current parliament, Mongolia has witnessed both rapid economic growth and a recession that was largely the result of government delays and cancellations of major extractive industry agreements.

Despite widespread disillusionment with political parties, the most recent IRI poll suggests that the majority of Mongolians will likely participate in the elections.  Forty-nine percent of respondents were undecided about which party to support, corresponding with high levels of dissatisfaction with existing political conditions. However, the changes to the election laws and preexisting support indicate the two major parties—the DP and MPP—will continue to dominate the parliament, and while the ruling DP party may retain its majority, it is unlikely either party will win an overwhelming majority of seats.

Voter turnout has steadily declined since Mongolia’s first democratic elections in 1990, which garnered a more than 90 percent voter turnout. According to IRI polling data, 78 percent of respondents voted in the last parliamentary election and 82 percent of respondents claimed to be likely to vote in the June 2016 contests. Although the 2008 parliamentary elections gave way to violent protests, this is very rare in Mongolia and is not anticipated for the June elections.

IRI has been working in Mongolia since 1991, where we cooperate with political parties, government institutions and civil society organizations, both in Ulaanbaatar and at the grassroots level in provinces across Mongolia.

Through our democratic governance work, we support Mongolia’s fight against corruption, a significant obstacle to securing citizens’ trust and confidence in its institutions.

Our parliamentary strengthening program provides technical legislative expertise and advice to members of the parliament to improve their ability to effectively represent their constituents.

We have worked across Mongolia to bring together local government officials and citizens to address community concerns at the provincial, county and town levels, improving government responsiveness to citizen priorities. To ensure political parties are strong representative institutions, we work with political parties to increase the participation of youth and women.  Our work strengthens the engagement of youth leadership by providing mentorship, expertise and advice and we are increasing women’s political participation in all levels of government by providing leadership and professional development assistance.