There is no better way to evaluate the performance of a democracy than by asking the people themselves what they think.

Regardless of any qualitative or quantitative metric – whether GDP per capita, legislature productiveness or prevalence of social protections – what matters most is how citizens and voters view and perceive their success or lack thereof.  As such, IRI conducts public opinion research worldwide – having surveyed more than a million people since our founding in 1983.  This month, our Center for Insights in Survey Research released the latest public opinion poll from Mongolia.  After surveying 5,000 voters about a range of issues, two critical points of view emerged.  Mongolian voters are dissatisfied with the quality of governance in the country, especially with regard to national government institutions, and the country’s poor economic performance. 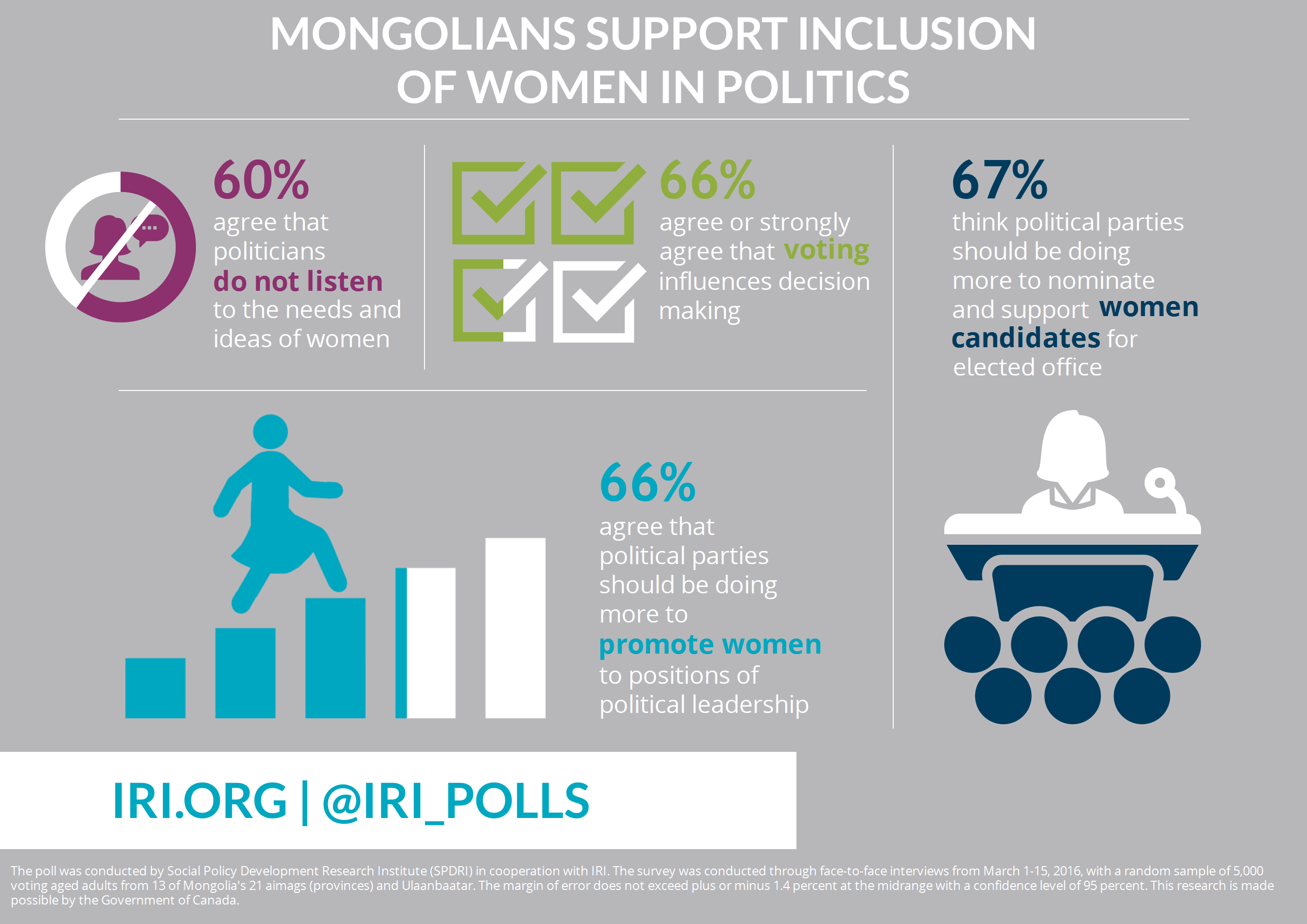 Voters also want to see greater opportunities for women to earn positions within elected office and strengthen Mongolian democracy.  As in many countries, women comprise more than 50 percent of the population of Mongolia and, according to the UNDP’s 2015 Human Development Report, Mongolian women have achieved and can expect to attend more years of school than men.  Despite these facts, only 14.5 percent of the current parliament members are women and the government recently decided to reduce the 30 percent quota for women candidates for parliament, decreasing it back to the 20 percent used in the 2012 elections.  Given the outcry from the women in parliament and numerous civil society organizations, it is unsurprising that 60 percent of those IRI surveyed believe that politicians do not listen to the needs and ideas of women.  Two-thirds of respondents also indicated that they think political parties should be doing more to nominate and support women candidates for elected office.  Since 82 percent of women who participated in our survey report that they are “very likely” or “somewhat likely” to vote in the June elections, it is probable that many of those respondents are displeased with the recent changes to the elections law.  In addition to reducing the required number of female candidates, the shift away from using a proportional party list system disadvantages new or relatively unknown candidates and will have even greater impact on women running for office.  As part of our mission to advance democracy, our project, Supporting Women’s Participation in Elections, with support from Global Affairs Canada, has reached more than 750 prospective candidates and their campaign managers through our Campaign Academy for Successful Elections curriculum.  By supporting women who seek elected office, IRI intends to support a democratic system that is reflective of citizens’ desires.

However, the electoral landscape is not all negative, despite dissatisfaction in the results and a desire for the system to change, 66 percent of Mongolians believe they can influence decision-making and create change through voting.  Mongolia is fortunate to have a citizenry that believes in the democratic process and is interested in participating in it, but it is clear from the responses gathered in our survey that the next government must make the economy and employment its first priorities.  In America, the phrase, “it’s the economy, stupid” refers to an expression coined by James Carville, a political strategist who wanted to keep the 1992 Clinton campaign on message.  Given what Mongolian voters are looking for, prospective candidates for the June elections would be wise to heed those words, still relevant long after they were first coined.