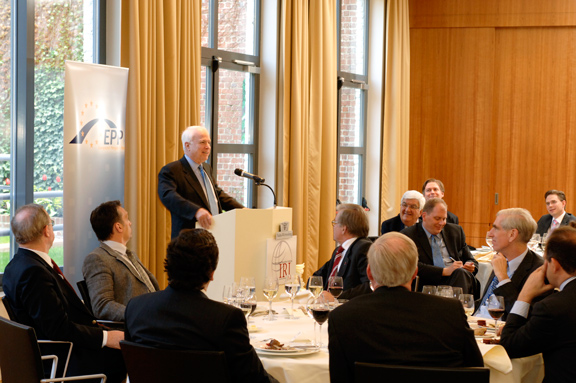 In partnership with the European People’s Party (EPP), which represents the largest number of members in the European Parliament and the European Commission, IRI organized the event as part of its activities to strengthen transatlantic ties.  Guests included the former Portuguese Prime Minister and current President of the European Commission Jose Manuel Barroso, EPP President and former Belgian Prime Minister Wilfried Martens, U.S. Representative to the European Union (EU) C. Boyden Gray, and U.S. Ambassador to Belgium Tom Korologos.  Last year, IRI established a partnership with the EPP to build alliances for democracy promotion and to strengthen ties between conservatives on both sides of the Atlantic.

In his remarks, EPP President Martens noted that the post-World War II transatlantic relationship had often been troubled, but that common values had helped the partnership weather the storms.  As Prime Minister of Belgium, Martens played a crucial role in holding the Atlantic Alliance together on the issue of missile deployments in the early 1980s.

“I am delighted that the EPP and the IRI had the honor to host such a prominent political figure of the United States,” said Martens.  “John McCain is a strong supporter of the transatlantic partnership…”

In his remarks and in discussion, Senator McCain emphasized that the transatlantic relationship has recovered from a low point several years ago, when sharp differences over Iraq split the U.S.-EU partnership.  Touching on countries as widespread as Russia, China, and Iran and on issues ranging from defense and energy to terrorism and immigration, McCain stated he was optimistic about the state and direction of the relationship.

Senator McCain praised the EU in the areas of human rights and democracy, calling it an “explosion in democracy promotion,” noting that European institutions have long been partners for IRI’s work and that those partnerships continue to grow and expand.

In commenting on how IRI has worked for years with European institutions, Senator McCain noted that IRI’s partnerships with the British Conservatives and the Konrad Adenauer Foundation of Germany date back to the earliest days of the Institute in the mid-1980s.  “More recently,” McCain said, “IRI has begun promising new partnerships with institutions in Austria, the Netherlands, Spain, and Sweden.  These relationships and others convinced IRI that there were also great opportunities to build partnerships for democracy here in Brussels.”

McCain chided those who were looking for differences in U.S. and European attitudes on the challenge of dealing with Iran’s nuclear ambitions, noting that the U.S. and Europe are working hand in hand to contain the situation.

“After the fall of the Soviet Union, we wondered where the transatlantic relationship was going to go, where [North Atlantic Treaty Organization] NATO was going,” said McCain.  “When NATO is now in Afghanistan, when we continue to be united by the threat of terrorism, when we face a common threat in energy policy; it’s clear we have grounds for optimism for the state of the transatlantic relationship.”