She Speaks: Esenbaeva in Kyrgyzstan

“She Speaks. She Votes. She Leads. We Are All Heard.” celebrates women’s leadership through stories told by inspiring women. Throughout the month of March, IRI and the Women’s Democracy Network are highlighting strong women throughout the world.

Esenbaeva Gulsana Baarayimovna is currently the deputy of Osh city council in Kyrgyzstan and is a veterinarian at Osh State Veterinary and Phytosanitary Inspection. She is resilient, ambitious and a tenacious leader.

Akayev came to power after Kyrgyzstan gained independence in 1990 as a compromise figure, for whom the majority of deputies of Kyrgyz Supreme Council voted. He seemed an ideal President: vigorous, democratically minded advocate of political and economic reforms.

The first term of his being in power (1991-1995) seemed to confirm iridescent hopes for change. The country began to carry out economic reforms: privatization, the introduction of the national currency, the resolution of private property, including land, etc. These reforms were accompanied by democratic reforms: separation of power, alternative elections, freedom of speech and political openness in comparison with other Central Asian states.

However, at the beginning of 1994, power was concentrated not only in the hands of the President, but also in the hands of his family and closest associates. The brutal corruption struck actually all state departments. Uzengu-Kuush – the territory of our country given to China, falsified elections increased the irritation not only of the ordinary population, but also of the economic and political elite of the country. All this contributed to the rapid decline the rating of Akayev as the President.

All this above-mentioned events aroused my civic awareness and political activity. Therefore, since 1998, I began to be involved in political life and call on the population to fight against the Akayev regime. For this reason, I was pursued political office.

My political activism began in 2005, joining the Social Democratic Party of Kyrgyzstan (SDPK). SDPK was a party of my character. Therefore, when starting my political career, I chose this party. Because it took an active part in the overthrow of the corrupted, family-clan and criminal regime of both Akaev and Bakiyev.

After the bloody events on April 7, 2010, Bakiev returned to Osh, with the hope to find support from the population of the south. However, the adherents of the interim government expelled him from the city of Osh. Me personally and my spouse took an active part in this activity, in order to preserve the victories of the revolution and the integrity of the Kyrgyz Republic. For services to the Motherland, my spouse and me were awarded with a special badge “Hero of April Revolution”.

Since 2007, I worked as the coordinator of the Women’s Wing of the SDPK for the Osh region. Within these years, I have been constantly subjected to pressure from the representatives of the previous authorities. As a result, I was dismissed from my job again. 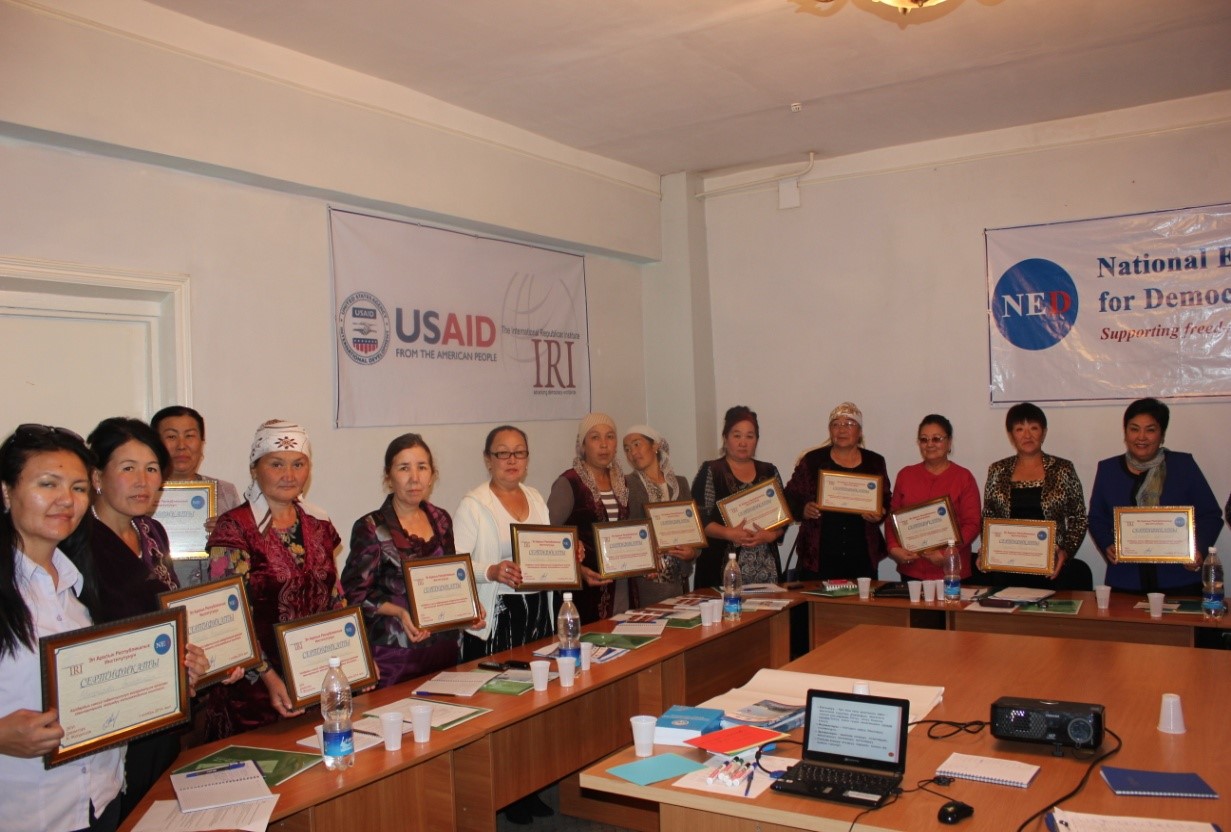 Since 2012, my deputy work is combined with my leadership inthe Women’s Democracy Network in the Osh region. During these  years, 150 women activists from various parties and activists of civil societies were trained by the International Republican Institute.

Training in 2016 in the framework of the project “Cooperation of Generations of Women Leaders” brought me great benefits. Currently, the acquired knowledge during the training within this project has found application in the practice of my work on the empowerment of women who did not have the opportunity to study in educational institutions. We are moving forward, applying what we have learned today.