Strengthening the Capacity of Women Leaders in Cameroon Despite Ongoing Violence

As violence continues to disrupt daily Cameroon life in several parts of the country, the work of women leaders proceeds to march towards a more inclusive political process.

Over the past year and a half, violence has increased in the central African country of Cameroon. The conflict dates back to World War I, when the League of Nations carved up Germany’s land in Africa between France and Britain at the end of the Great War. In 1961, British Cameroons (the current Anglophone region) joined the Republic of Cameroon, the French-administered section that became independent in 1960, to form the Federal Republic of Cameroon.

President Ahmadou Ahidjo abolished the federal system in 1972, and feelings of marginalization have increased among Anglophones since then. Despite legally being a bilingual country, some Anglophones express sentiments that the government promotes and rewards the French language and employs strong censorship tactics. Those in former British Cameroons say the best jobs go to the French speakers and feel forced to assimilate into Francophone culture, creating complexities in the conflict beyond just a lingual divide. In 2016, the frustrations reached a tipping point, and a series of protests began. In response, the national government shut down the internet in the Anglophone regions of Cameroon for 94 days in 2017 and sent messages warning of imprisonment for sharing misinformation.

Stella Fomumbod, a member of the Women’s Democracy Network (WDN) in Cameroon, said the political situation is “affecting women more than men.” In her eyes, men are predominately featured in the news as part of the violent protests, but the short and long-term impact of the crisis makes women incredibly vulnerable. According to the UN, at least 160,000 individuals have been internally displaced (IDPs) in the northwest and southwest regions of the country and another 21,000 have registered as refugees in Nigeria. As a result, IDPs and women face poor living conditions, food insecurity, lack of access to basic health services and a heightened risk of gender-based violence. The threats faced by these IDPs is compounded by the ongoing fight against Boko Haram in the region.

Anglophone women make up 11 out of 64 female parliamentarians, four out of nine female mayors and one out of nine female ministers. Their voices are hardly heard, and their impact is felt less in the decision-making processes of the country because they are overshadowed in number by the majority French-speaking political representatives. An equal representation of women in Cameroon’s government would allow for all constituents’ voices to be heard. WDN helps women connect with one another and build solidarity across their communities and across the globe; organize a unified voice to promote their rights; and effectively participate in decision-making to advance their demands. Since 2012, WDN’s Cameroon Country Chapter has helped increase women’s participation in decision-making processes at the local and national levels. Ahead of the October 7 presidential election  – where all nine candidates are men – it is a critical time to empower women in the country. 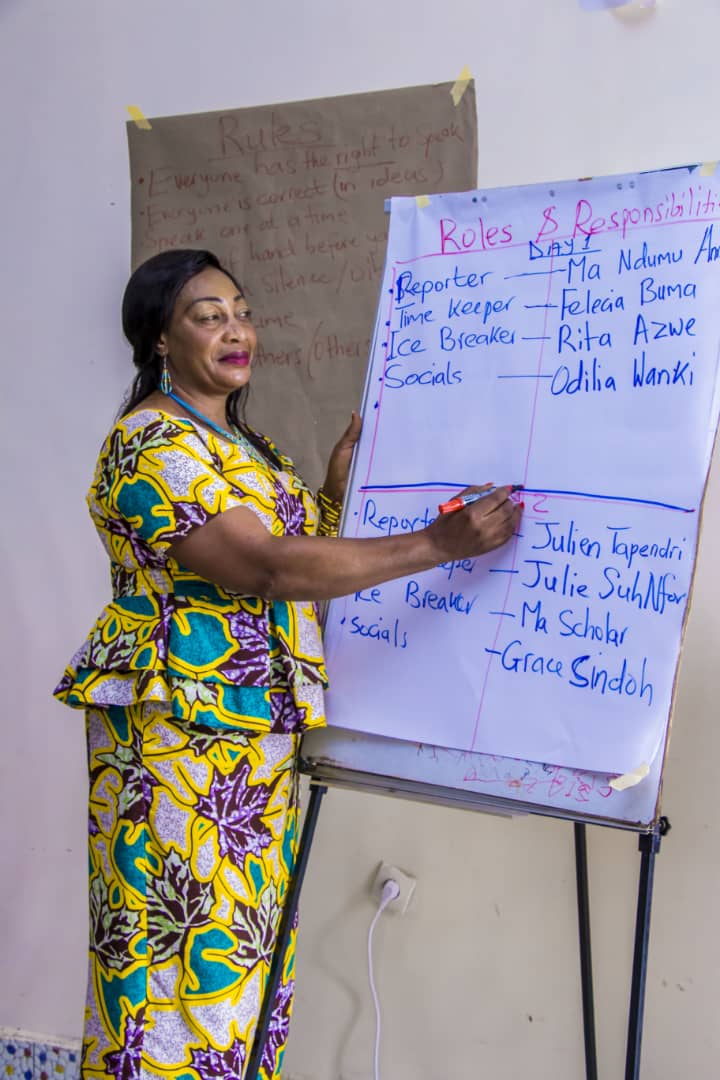 The Chapter seeks to propose a strategy in response to the prevailing issue of marginalization of English-speaking Cameroonians. Mobilizing female Anglophones on to a common platform will form a collective voice to strengthen their representation at both regional and national levels. To this end, the Chapter has conducted WPLA trainings since 2017 to further increase the capacity of politically inclined women to take on increasing leadership roles in the community, and ultimately run for political office.

According to Fomumbod, “Women in the Anglophone regions lack opportunities for leadership and capacity building trainings that are enjoyed by their counterparts on the French speaking side.” Most women fear intimidation by the majority French-speakers and limit their political aspirations to local-level positions as a result.

Thirty-four participants risked the dangerous travel to attend WDN’s training, developing leadership skills and political knowledge ahead of the upcoming election to ensure women’s representation. The training received no media attention or attendance from government officials due to current fears of holding government-led meetings, especially on political issues. However, the current political situation led to heated conversations between participants on the importance of political participation. The crisis has become a unifying factor and has generated a greater call for collective action among the training participants, who are also public figures and holders of political/public offices. The leadership trainings have become an opportunity for participants to share and update each other on the magnitude of the crisis in their different divisions and regions, encouraging collaboration to find solutions to the political restrictions women face in Cameroon.

Prolonged conflict will only lead to further instability in the region. The United States has invested military aid in Cameroon to counter the threat posed by Boko Haram. From 2012-2016, the U.S. provided $200 million in military aid and has had 300 troops stationed in the far northern part of the country. The current internal civil conflict impedes Cameroon’s ability to face external security threats. IRI research in other countries has shown that marginalized populations and disaffection with the government are drivers of violent extremism. Working to strengthen inclusive democracy in Cameroon will hopefully decrease the threat of civil war in the country and contribute to regional stability, lessening the potential influence of Boko Haram.