This past May, my son was born. As I sat in the hospital room and held him in my hand, I thought what many new parents probably think: how important it is to pass the world to the next generation.

Youth are our collective future. Too often young people are excluded from the decision making process. Excluding youth (our future) from the operations of political life is a foolish, and often dangerous proposition. If omitted, youth are left to reinvent the wheel. It’s a sure path towards the decay of institutions and political culture. Not only this, but marginalizing youth can be a recipe for breeding a disgruntled young population who, without a vision of a hopeful future, may lash out violently.

This is not to say that we should not forget the wisdom that comes with age, but it is true in all things including life, art, culture, organizations, and yes, politics: the new will eventually replace the old. On the scoresheet of history, father time is undefeated. So, it is on the shoulders of every generation to think about how they are preparing the next generation to take the lead in society.

When I was sitting there, going through this thought process, it reinforced to me how important the youth work of IRI’s programs really is. Across the Middle East and North Africa (MENA) region, I have seen significant strides in supporting and activating youth in civil society and political parties.

To investigate further about this, I looked back to some of MENA’s records since October 2016 to look at the reach IRI has directly had with youth in the region

Suffice it to say, I was impressed with our numbers. IRI had reached 3,424 politically and civically active youth through trainings and youth-oriented events in the MENA region. According to our records, IRI more specifically reached 877 young civil activists and 514 youth in political parties. This includes 1,174 youth in Tunisia, 1,073 youth in Jordan and 602 youth in Morocco. 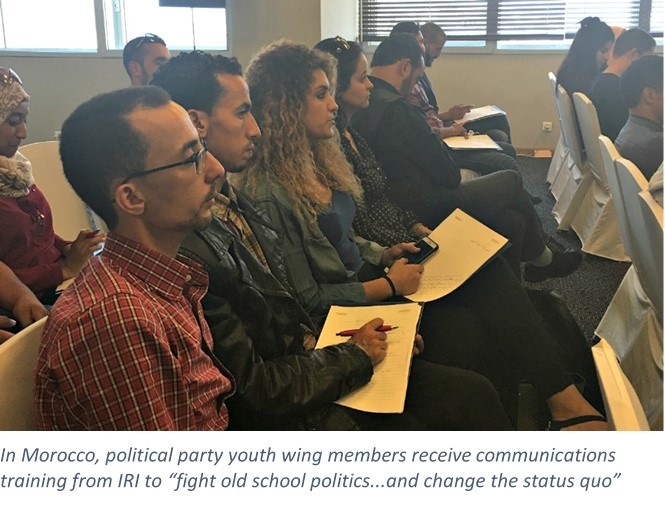 Now, some of the youth in these parties have been reached multiple times and this has been captured in our records. However, IRI has indirectly reached many more youth through civic education projects implemented by our partners and there are other closed society programs where it is difficult to capture secondary beneficiaries. Knowing this, I anticipate the number of youth reached is, in fact, much larger than expressed here.

Beyond the numbers, through evaluations I have conducted across the region, I have seen directly how IRI has influenced youth beneficiaries.

In Jordan, IRI has a Youth Leadership Academy (YLA) that is focused on identifying youth in Jordanian communities, educating them about how they can engage in politics and the impact they can have in their community. This is significant– Jordan suffers from a particularly depoliticized youth who are skeptical of political parties and other political actors.

This April, I came back from conducting an evaluation of the YLA. During this evaluation, I got to talk to the youth who participated in the program. It was amazing to see that youth IRI worked with have become more active in political parties and in their community and many now have the aspiration to run for office. Just recently, in the August 15 Jordanian municipal elections, two YLA graduates won seats in the governorate councils of Irbid and Tafileh, Jordan.

Also, I have had the opportunity to evaluate a number of programs that are designed to train youth party members on ways they can be better political actors. In both Tunisia, Morocco, and Lebanon, I have interviewed youth party members who have said that IRI provided them the skills to become more active politically in their countries, improve their position in their party and be active in campaigns as volunteers, campaign managers and candidates.

In Tunisia, eight IRI trained youth were elected to office. In Lebanon, four youth IRI worked with in one party obtained positions in their political party’s political bureau and five advanced to the executive bureau.

These numbers show that the work we do is effective. However, results from youth empowerment work can be particularly difficult to measure. Oftentimes the results that we see occur beyond the term of a grant – it is a generational result that sometimes requires overcoming various barriers facing youth for it to fully manifest. We’ve seen it happen. After grants have closed, youth we have worked with have often achieved decision-making roles in their parties and government. We saw youth party members who IRI trained in Tunisia become cabinet officials in government after the Revolution. 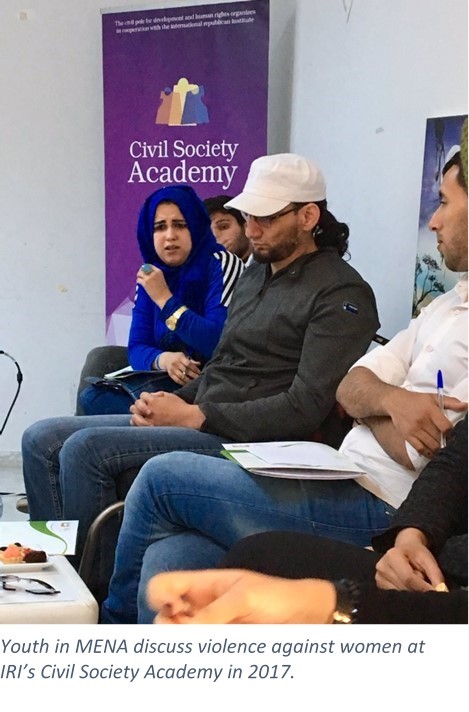 Within a term of a grant, most evaluators, like me, often are left with only tracking the small advancements that might hint at the trajectory of these young political actors and discuss the contribution an intervention may or may not have had to that success. At the very least, democracy and governance implementers, like IRI, can discuss how we have prepared these youth for political engagement, particularly to think critically and democratically.

Youth have a huge responsibility in any society and this is especially true in transitioning democracies. They are tasked with bringing their societies into a new era. When empowered, they can provide different thinking and bring new ideas and new approaches to society. To quote the rapper Lupe Fiasco lyric “Did you improve on the design? Did you do something new?”

Generational change is an opportunity to help bring these young democracies forward. It may be the most important task before democracy and governance advocates – and one of the most difficult mountains to climb.

Even a few young leaders being active in politics can inspire many more. If IRI even has a small contribution to this success, that achievement can produce so many more great results.