“These Young People Really Have Guts”

In the recently released world report from Reporters without Borders, Cambodia ranked a dismal 128 out of 180 on the World Press Freedom Index.

There continues to be crack downs on bloggers, political opposition, and environmental journalists. Recently, a student was arrested for making “revolutionary” comments on his Facebook profile and reporters uncovering the country’s illegal logging industry frequently go missing. With the majority of the traditional media in the country controlled by the state or political parties, there is a major gap for independent, unbiased news on the state of Khmer politics. 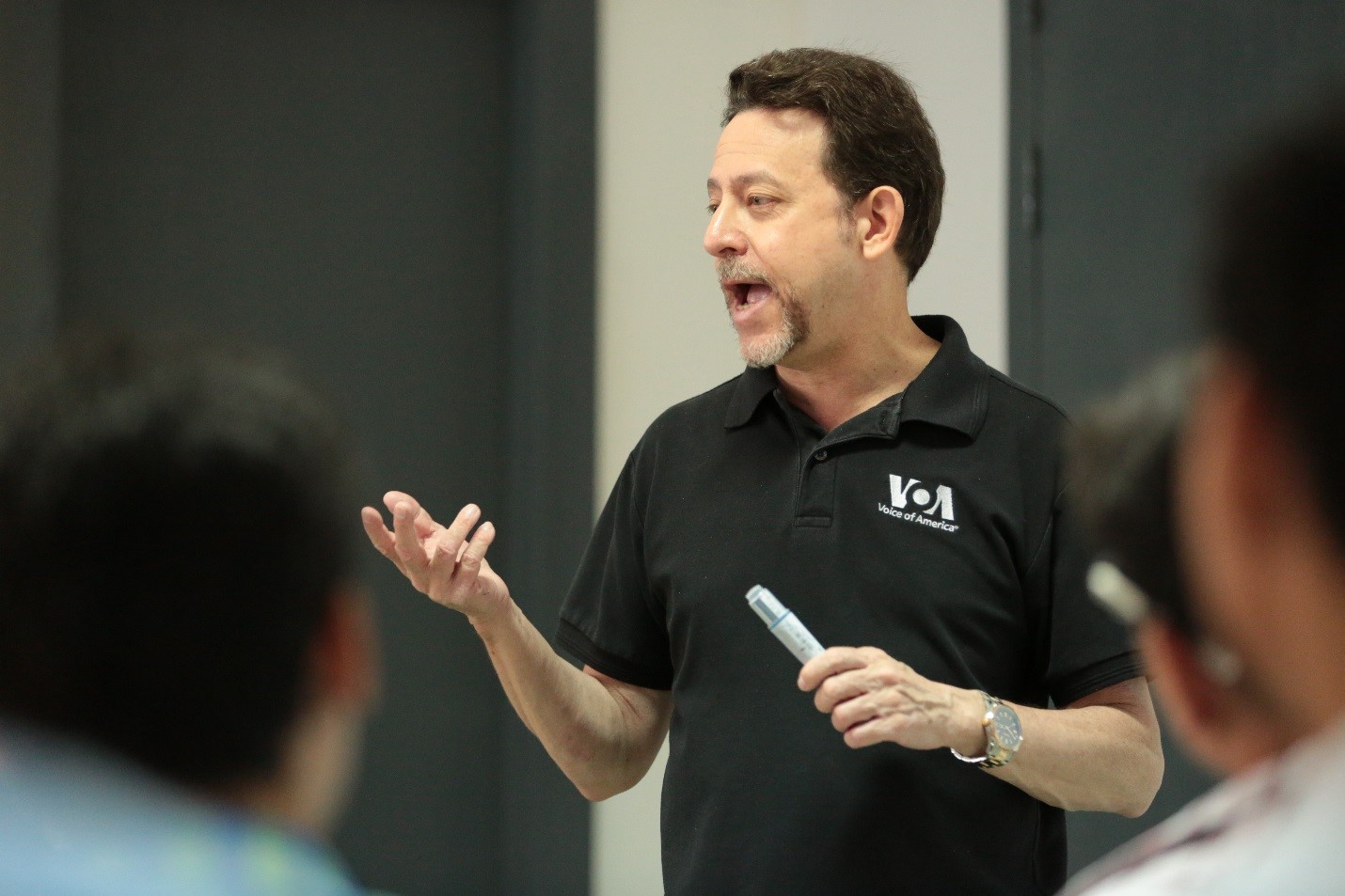 Enter Politikoffee, a group of young, enthusiastic and tech-savvy Cambodians who gather on a weekly basis to discuss socioeconomics, political developments and democratization in Cambodia. Politikoffee has 30 independent analysts devoted to filling the void of thoughtful, objective analysis in Cambodia.  Their goal is to bolster the culture of dialogue in Cambodia through raising awareness of sociopolitical dynamics as well as raising the level of debate and critical thought throughout the country.

Steven Herman of Voice of America was in Phnom Penh consulting with Politikoffee on journalistic best practices and interviewing techniques. Mr. Herman (@W7VOA) is currently VOA’s regional bureau chief in Bangkok and has been living in the region since 1990. I (CC) interviewed Mr. Herman (SH) on April 21 to learn firsthand about his experiences. Below are highlights from that conversation:

(CC): Can you tell us about your experience with Politikoffee?

(SH): I was pleasantly surprised; they exceeded all my expectations. I’ve been to about 69 countries and territories and been in Asia for more than 25 years but I was really heartened by what I saw from the young people there and from what Politikoffee is doing.  Look, I’m a journalist so I’m pretty cynical. I can feel a bit of optimism about the future of Cambodia because of what these young people, such as Politikoffee, are doing.

(CC): You said you were pleasantly surprised, what surprised you?

(SH): They are really in tune with what is going on in the world. I’ve worked with young people in other more developed countries in that region of the world, but they are not as engaged as Politikoffee. That is really something remarkable and they deserve the support of the outside world. To be engaged, to talk about civic issues and political dialogue – Cambodia is not the easiest place to do it. They’re aspiring to be journalists and that can be down-right dangerous in Cambodia. One thing I thought, because they’re well aware of the situation they’re not naïve, these young people really have guts. Not something I see with their peers in other countries these days.

(CC): How does the environment for press in Cambodia compare to other countries in SE Asia?

(SH): It’s not great, is it? Yesterday the world press rankings came out, by Reporters without Borders, and if you look at Southeast Asia it’s not a pretty picture at all. Cambodia ranks 128 out of all countries, notably it’s come up since last year (+11). But the media is indirectly controlled by the state and is closely monitored by the government. If you get involved in the reporting of some of the more controversial issues such as the pillaging of natural resources some journalists pay with their lives. It’s really easy to be charged with defamation.​

What is refreshing about Politikoffee is that they’re not coming out as an opposition group against the government, they’re trying to have a safe and neutral space to discuss issues and not be beholden to any political party or person. That’s really rare.

(CC): What advice would you give to anyone fighting for the rights of a free press in Southeast Asia?

(SH): I’d probably co-opt the Nike slogan – just do it. This is a new era, when I started out media was in the hands of the privileged, you had to get a broadcast license or publish a newspaper, there was no internet. You didn’t have all these mechanisms, all the social media, apps, and devices where anyone can become a citizen journalist. It’s an amazing time. So put yourself out there and become an expert on an issue or area in your community. Politikoffee is a perfect example with what they’re doing in Cambodia.

(CC): You’ve been working in SE Asia for almost 30 years now, what generational trends stand out?

(SH): There’s a big difference with the greatest generation, people now in their 80’s in China, Japan and Korea who experienced World War Two. They went through the trauma, poverty and the rebuilding. These people really cherish what their societies have accomplished after the war. Obviously the younger generations don’t have that and its concerning to me to see younger generations that have apathy and lack of appreciation – although I’m sure that exists in the United States too. I am a strong believer that history has some very valuable lessons for us whether it happened 20, 200, or 2,000 years ago. When I was in school if we didn’t learn something in school we had to physically go to a library to learn about it. Now it’s at the touch of your fingertips, you just need to go on your phone or go online. But how are people spending their time? They’re playing videos games or having snapchat conversations that are very superficial.

So when I meet groups of young people like Politikoffee, it’s really encouraging because I can see they are breaking out of the mold and going beyond what most of what their peers are doing. 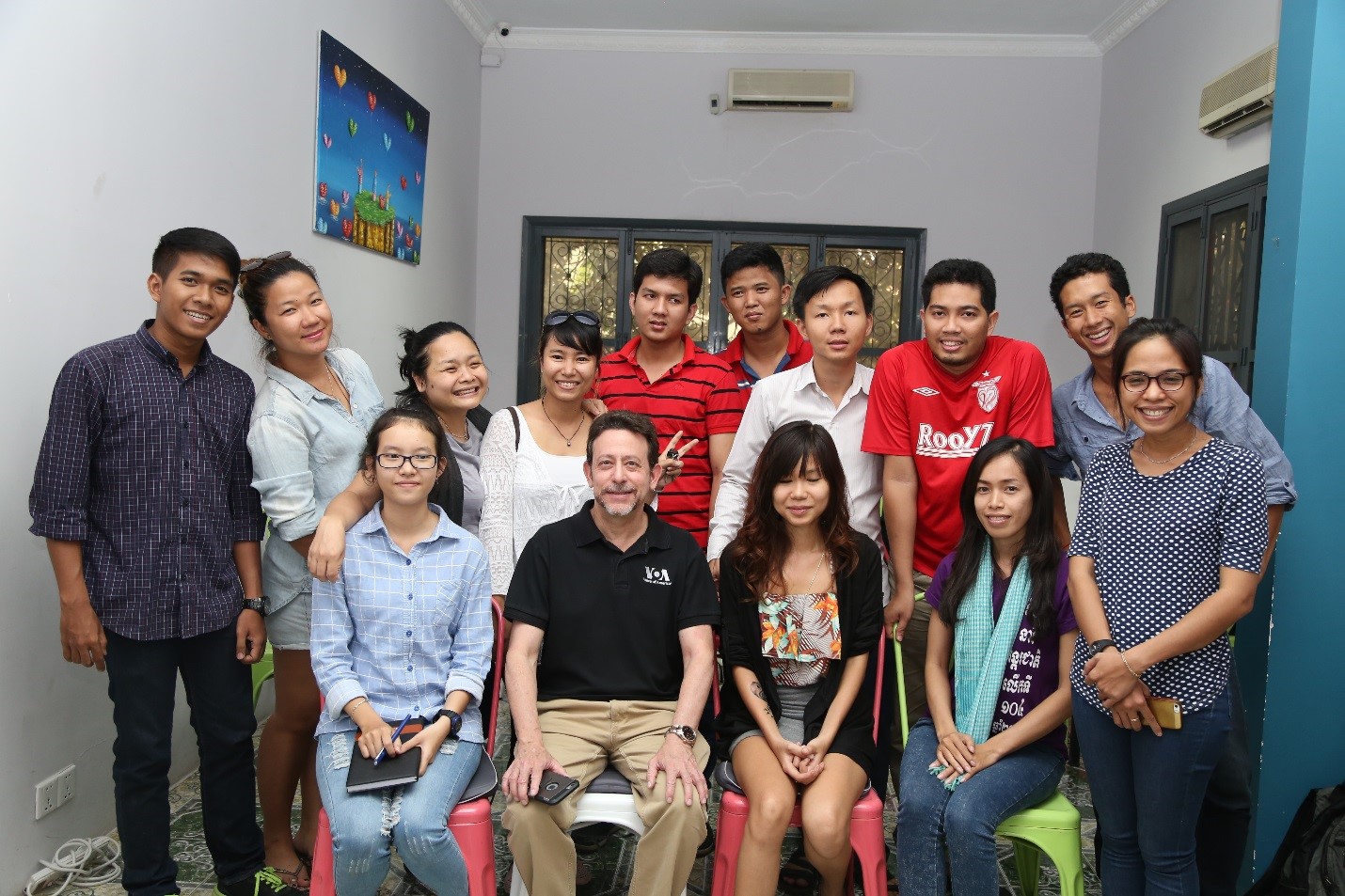 (CC): How has new media challenged the status quo in SE Asia?

(SH): I think the great thing about social media and the internet is you don’t have to have a printing press; you don’t have to have a broadcast license. That is a tremendous equalizer. However, people who want to do this require some training on the fundamentals. Learning how to get the basic who, what, where and whys of a story. How to prevent personal biases from seeping into a story. They need to learn interview techniques, how to edit stories, the importance these days of engaging with your audience. We had a robust discussion in Phnom Penh with Politikoffee about comments. If you have a website or a blog and people are commenting, do you let anyone say anything or do you moderate? Do you let people comment anonymously? In some countries commenting with your own name can be very dangerous. But if they’re anonymous they can behave in bullying behavior; so there’s not one answer.

(CC): How has new media challenged regimes in the area?

(SH): In a number of ways, I think it is outside their control to some degree. If they want to get really strict they can shut down the entire internet, but that’s sort of impractical. New media allows people to get together with people with common points of view and find places for discussion. Which is something you can’t do when the traditional media is controlled by the state. So it’s a real revolution in regards to how people interact with autocracies. Does it mean things are going to change overnight? No. Does it mean that these new media outlets have certain responsibilities as well? Yes. We discussed this in Phnom Penh, with that sort of power that you may have by creating a new media site there is a lot of responsibility that comes with it.

(CC): Will the next generation of leaders be helped or hindered by new media and the information age?

(SH): I’m pretty optimistic that they will be helped. However, we have seen whether it’s the government of China or groups such as ISIS in the Middle East they’re also using new media to propagate as well. So it’s a double edged sword, it’s not a panacea. They’re delivery vehicles. It’s like a car or an airplane. Vehicles can be very useful but they can also be very dangerous. Cars can kill people if the driver is reckless. Planes can be loaded with bombs to drop on people. But cars and planes can also be used to deliver to aid. So it’s what inside that matters most, it doesn’t matter if it’s a blog or Facebook. Either can be used for good or evil.