On November 15 Ukraine held runoff elections after the October 25 local elections, which served as a powerful reminder that Europe’s largest country remains on a democratic path, making progress in three key areas.

First, President Volodymyr Zelenskyy successfully organized and oversaw elections despite COVID-19 normalizing election cancellation and postponement across the globe. Second, more than 10 million Ukrainians voted in person to reinforce good governance across 13,000 local and regional offices. And finally, the International Republican Institute’s (IRI) online learning platform proved to be a useful tool for political parties to overcome the limitations of COVID-19 and gave more than 200 poll watchers access to trainings.

October 25 was a major setback to the ruling Servant of the People (SoP) party, but a welcomed sign of democratic accountability.

With Ukraine’s declining living standards and ongoing corruption diminishing the SoP’s popularity, the October 25 elections were projected to be an uphill battle for the ruling party. But rather than obstructing the electoral process under the cover of COVID-19, President Zelenskyy instead upheld Ukrainians’ right to transparent and free elections.

Ukraine experts, such as IRI’s Michael Druckman, saw these elections as a marker of ongoing political success in the country. As Druckman explained, these elections were “primarily a referendum on the quality of local governance in the country, and the result was a resounding vote of confidence in the existing municipal authorities.”

Indeed, research showed that SoP’s local footprint was outsized by competing parties, assuring a crushing defeat for the ruling party, as Druckman observed.  But the fact that Zelenskyy understood his fate and moved forward with elections despite this knowledge is a powerful sign of a maturing democracy.

A 36 percent voter turnout during a worsening COVID-19 pandemic is an encouraging sign of Ukrainian enthusiasm for democratic governance.

Voters turned out in person to reward good governance and to contest underperforming incumbents’ mandates. The results of these elections have already decided the allocation of over 13,000 offices and proved that incumbents who prioritized good governance when in office were more likely to secure re-election when their term came to an end. This, too, is a reassuring sign.

Rather than voting for national political party powerhouses in the October elections, Ukrainians gravitated towards local parties perceived as contributing to the future of their cities. For example, incumbent mayors from Khmelnitsky, Chernihiv and Ivano-Frankivsk were all re-elected, whereas incumbent mayors from Kherson, Mykolaiv and Poltava had to re-compete in this month’s runoff elections. Moreover, IRI surveys show a correlation between levels of local satisfaction with governance and re-election, with mayors from Khmelnitsky, Chernihiv and Ivano-Frankivsk earning the public’s approval and those from Kherson, Mykolaiv and Poltava underperforming. 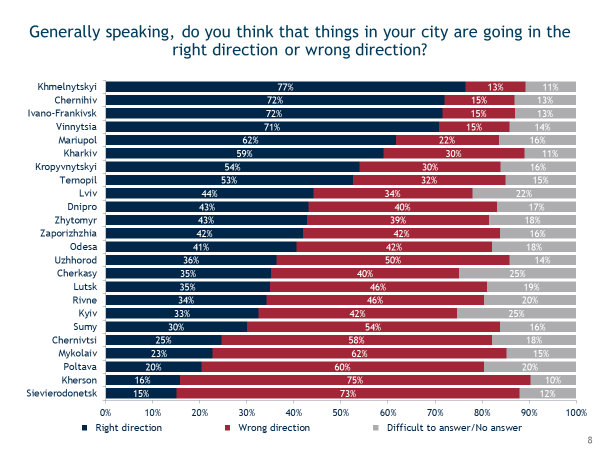 The goal of iVote was to overcome the social distancing protocols and venue capacity limitations associated with COVID-19 and prepare poll watchers for elections. In doing so, IRI developed a mobile-friendly, web-based learning portal that users could access from anywhere, at any time.

The six modules summarize key guidelines in Ukraine’s electoral code. They also advise users on how to observe elections, how to prepare for their duty and what steps to take when observing violations. IRI also awarded a Certificate of Recognition to all users who tested out of each chapter (which you, too, can do here). IRI plans to meet the demand for these modules by making them available to a broader Ukrainian audience and sharing it on our Electronic Learning Platform.

No matter the winner, Ukraine’s elections were certainly an achievement for the country’s democracy, and as the incumbents and newly elected officials move closer to realizing Ukraine’s democratic goals, IRI remains committed to supporting them.