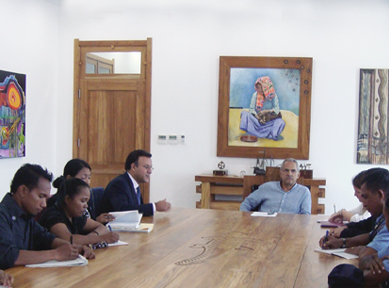 Seven graduates of the IRI’s 2009 Youth Leadership Development Course recently met with Timorese President José Ramos-Horta.  During the meeting, President Ramos-Horta encouraged the graduates to continue to excel in their professions in order to help Timor-Leste develop peacefully and democratically.

President Ramos-Horta addressed the group about the nature of democratic progress within the country and political challenges of the future.  He emphasized that development within Timor-Leste depended upon the vision of young leaders and their participation in the political process, and acknowledged the importance of leadership programs like IRI’s in supporting this next generation of leaders.

During the meeting, President Ramos-Horta spoke with each of these young leaders about the nature of their respective professional fields.  Included among this group were representatives from the Ministry of Foreign Affairs, the Ministry of Tourism, Trade and Industry, the Armed Forces, the National Police, the Judicial System Monitoring Program, the Secretary of State for Defense Forces and the Women’s Business Association.  At the conclusion of the discussion, the participants said the opportunity to meet with their president had been an inspirational occasion.

The Leadership Development Course is a six-month long series of workshops which range in topics from effective communication to security sector reform.  The emphasis is on enhancing political skills and building knowledge of key policy issues facing the country.