Since Indonesia adopted a gender-quota law for elections in 2003, and strengthened it five years later, the number of women elected to the 560-seat House of Representatives, or DPR, had increased, from 11% in 2004 to more than 18% in 2009.

Unfortunately, instead of taking advantage of the law to nominate female candidates who would add to the ticket, parties overwhelmingly preferred to select female placeholder candidates. As a result, the majority of female candidates were family members of party leaders or popular social figures who did not necessarily have any experience in politics and were usually intended to be steered by male party leaders.  These candidates were even called “pemenuhan kuota” or “quota fulfillment’ by Indonesian voters.

For the 2014 elections the voluntary gender-quota law was strengthened by the Election Commission by requiring parties to field at least 30% women candidates in every electoral district. This stipulation forced political parties to ensure they had enough women candidates in party lists but many women candidates were recruited close to Election Day and lacked the necessary preparation and support to run a professional campaign.

Maria Helintini Suharti, a member of the Prosperous Justice Party (PKS) from East Nusa Tenggara, was one of these female candidates.  She had just joined the party as it was nominating and selecting candidates. That did not discourage her from putting her best effort to run a campaign under an Islamic party’s banner in a district where Muslims are not in the majority. Unfortunately, she was not successful.

When IRI invited her party to participate in IRI’s Women Political Leadership Academy (WPLA), she was one of the participants recommended to represent her party. The WPLA is constructed to enhance women’s capability to actively become part of the political process. The curriculum builds upon the best practices of the Women’s Leadership Schools and is geared towards women obtaining political leadership positions. During the three day long academy, Maria and her fellow participants learned public speaking techniques, constituent outreach, how to work with media, networking and fundraising. IRI invites local NGOs, media representatives and elected officials to participate in the trainings and share best practices or relevant lessons to winning an election and how to be an efficient and effective representative.

Maria was elected to the post of Secretary for PKS’ Kupang municipality branch during the party’s internal leadership meeting. The leadership selection process team elected her to become the party’s Secretary after evaluating her strong will and tireless support to the party’s work and good interaction with party leadership. She will serve in this position from 2016 to 2021. She is the first woman to serve in the post in the history of the institution in Kupang. 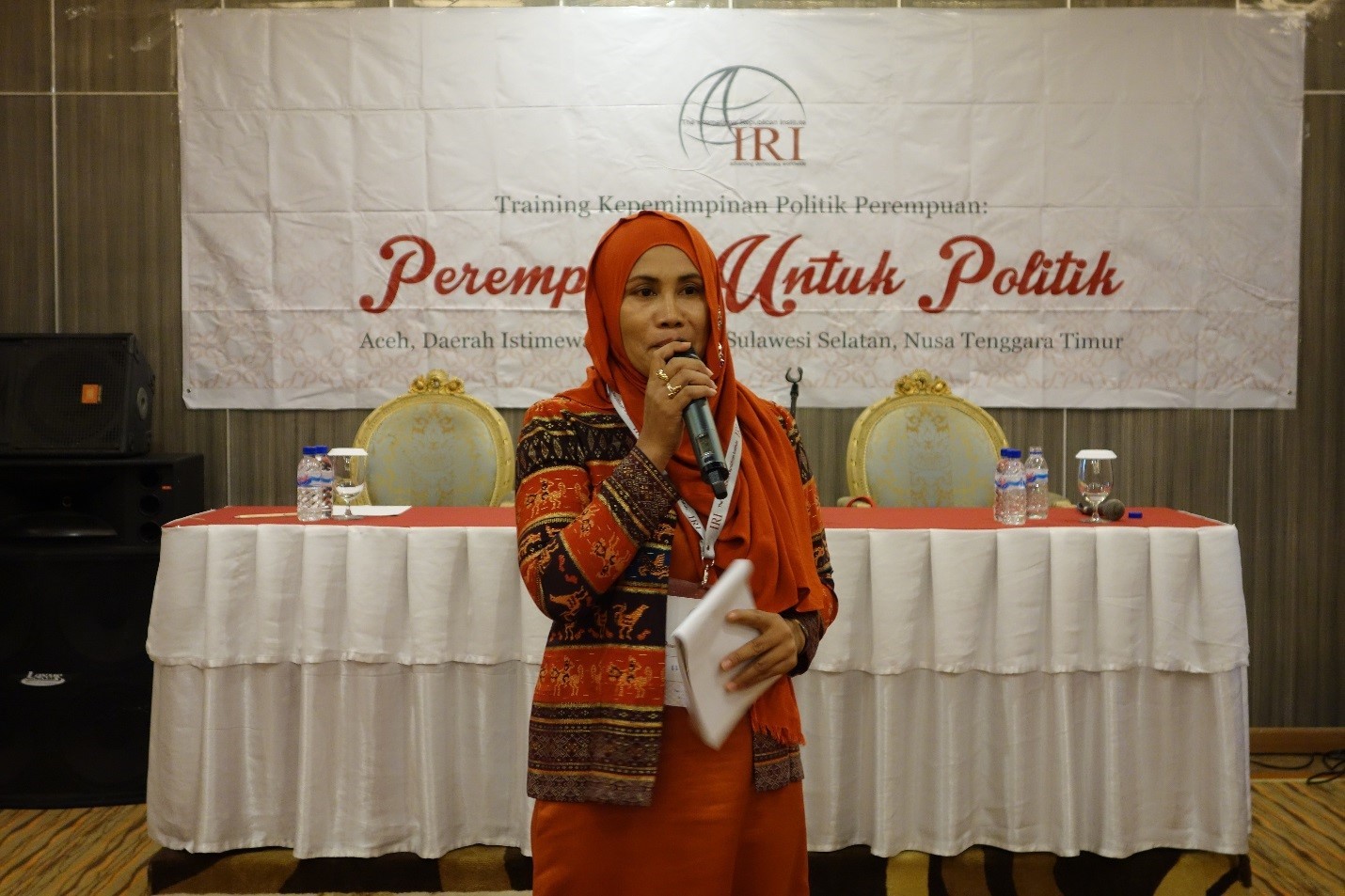 IRI reached out to Maria (MHS) to learn more about her unique political story:

What attracted you to a profession in public service and politics?

(MHS): I became interested in politics because I enjoy working on any kind of social organization and love to be engaged with social activities.  I think I reached the potential to work in a political party, so I chose to join PKS (Prosperous and Justice Party) and they asked me to run for legislative election in 2014 to meet the party women quota 30%.

What goals do you want to achieve for your province/country through public service and politics?

(MHS): My initial goals were to learn how to campaign correctly so that when we are addressing the people we won’t give empty promises.  In PKS, I learned many things about consciousness and volunteerism where politics is also about “moral preaching”, which means to ask people to do what is morally good.  Power is not the sole goal for me to achieve by joining a political party – it is more important for me that I can serve the people and do the best for the people, my nation and my country.

What lessons did you learn from your first election?

(MHS): I learned on how to better interact and engage with the public by meeting and understanding people from different backgrounds, the importance of campaign finance management, and the necessity of mass communication.

What specific skills from IRI trainings did you use rise through your party ranks?

(MHS): IRI helped me get promoted by my party into the higher ranks with a practical tip:  in order to get recognition, I need to be confident and more actively involved in party activities, even though political parties, especially PKS, are the world of male peers.  During IRI training I learned a trick – Delima’s words kept playing in my head – to go to party office very often and dare myself to ask if there is anything I can do or help.

This meant I had to take some initiative to participate in my parties’ regional conference and meetings as a volunteer.  I was the most active volunteer in reporting the events of the conferences.  Since then, my party appreciates my performance and found my potential.  They have faith in me for this promotion.

How did you become Secretary of the PKS Kupang branch?

(MHS): Inspired by IRI training, I took some initiative to be more involved in my party’s program activities and to demonstrate my ability.  Early in 2016 I assisted the provincial leadership meeting along with mostly male colleagues. When the likely candidate for the Kupang Municipality Secretary withdrew from selection process, party leaders who witnessed my hard work during the Provincial Leadership Meeting nominated me. During the selection process meeting, I got elected as Secretary of the party in Kupang.

What are your duties and responsibilities as Secretary of the PKS Kupang branch?

(MHS): As a secretary of PKS Kupang branch, my duties and responsibilities include:

IRI’s goal in Indonesia is to increase women’s political participation and representation in elected office. IRI is achieving this goal by conducting a multi-faceted program that strengthens the capacity of political parties’ women wings to provide women the skills needed to advocate more effectively for leadership and policymaking roles within their parties. By increasing the number of women members within the party, and instituting recruitment strategies which will expand the pool of strong female candidates prior to 2019, IRI hopes to increase the number of women participating in Indonesian politics. In addition, IRI’s program combats gender biases against women candidates by shaping a positive, public opinion of women in elected office as transparent and accountable legislators. 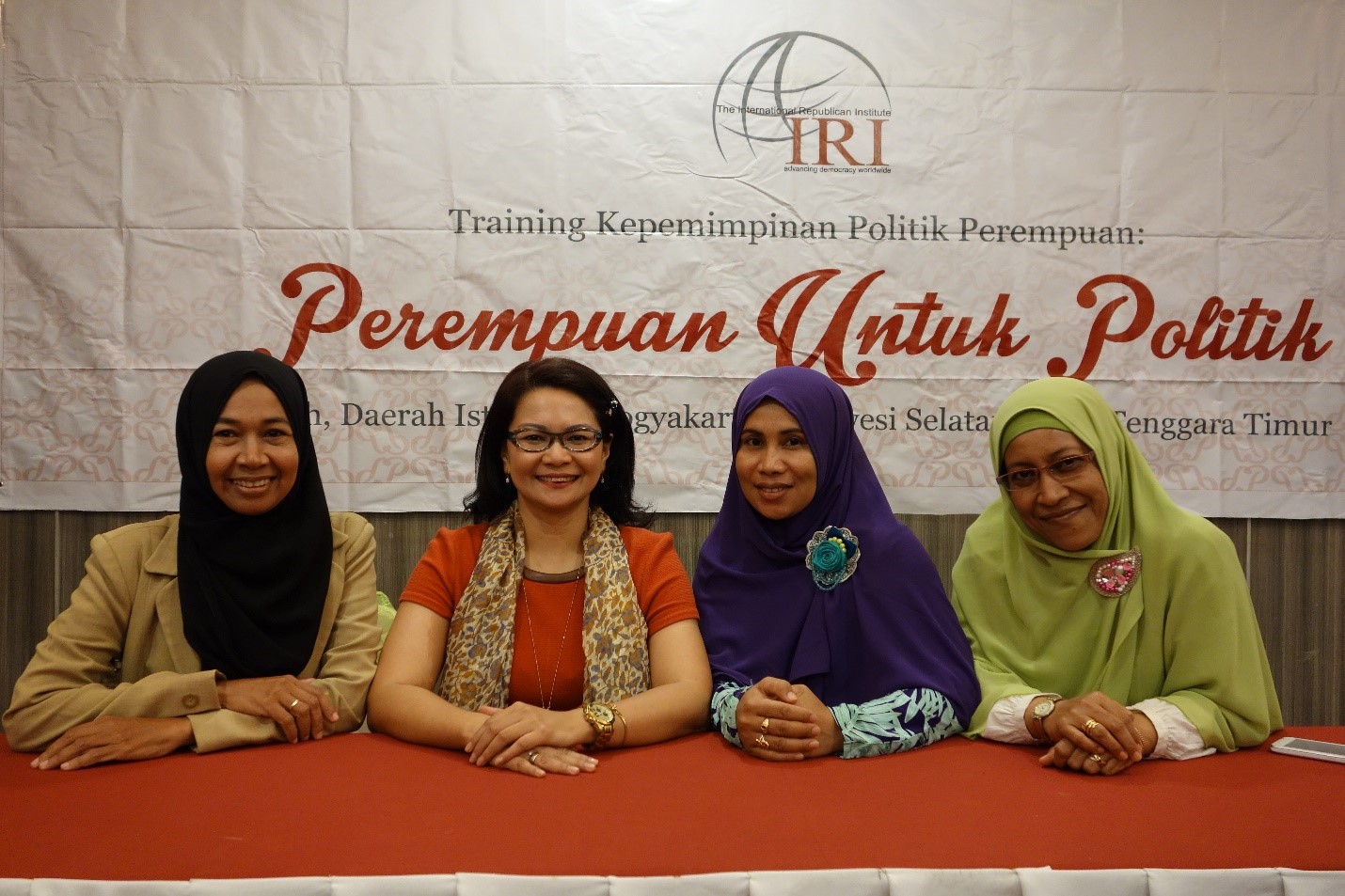