Municipal council elections in May were a milestone in Tunisia’s political transition. As part of the country’s long path to democracy and decentralization, Tunisians elected thousands of local representatives to 350 new municipalities that are responsible for myriad administrative, local development and service delivery functions.

Although the process of defining municipal councils’ precise mandates is still underway, the democratically-elected assemblies constitute the legitimate local government Tunisia has never had but desperately needs in order to address citizens’ most pressing concerns.

As part of a USAID-funded program to promote the participation of marginalized populations like women, youth, persons with disabilities and rural communities in their electoral and political processes, IRI is partnering with community organizations in Tunisia’s historically-neglected interior regions to design and implement civic education initiatives that connect citizens with new municipal councils (some for the first time), build trust in local government and foster inclusive dialogue on community development and governance. Here are two of their stories: 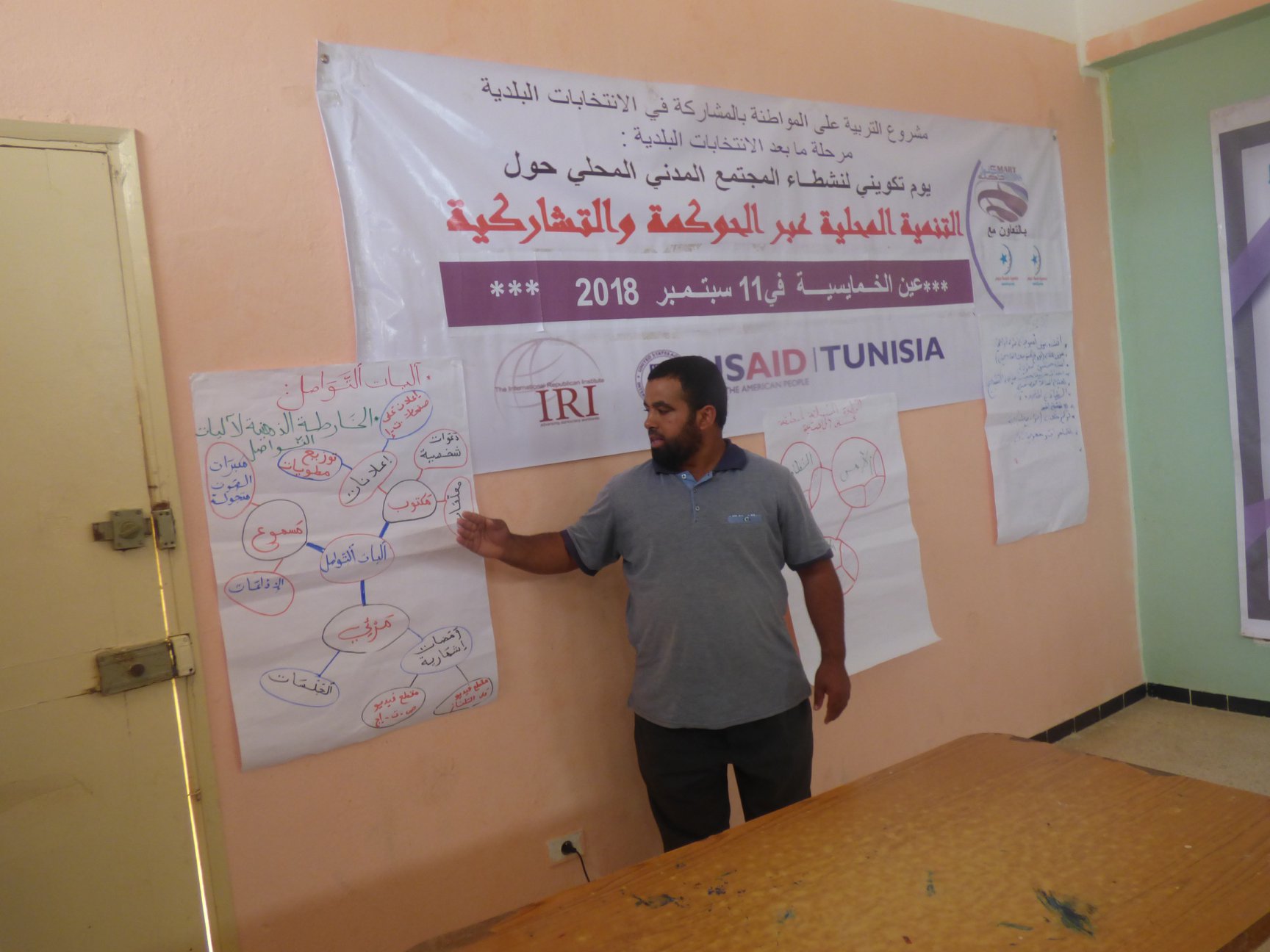 Like many interior communities, those in which IRI’s local civil society partner Ghodwa Khir works in the southern, coastal governorate of Gabès are under-resourced and led by new and inexperienced elected officials who are under-equipped to meet the expectations of constituents. Following their regional voter outreach campaign ahead of local elections in May, Ghodwa Khir is now bringing together municipal councils and local associations across the governorate to build trust in the local government process.

“We had three objectives,” said Selma Lemdani, president of Ghodwa Khir.  “Build the capacity of promising youth from nascent civil society associations in small towns around Gabès to have an impact on the success of decentralization and local governance; rebuild/establish trust between new municipal councilors and citizens; and assist local councilors to become comfortable interacting with constituents.”

In the municipalities of Chenni, Oudhref, Teboulbou and Zarat, Ghodwa Khir organized the first meetings between municipal councilors and representatives from civic organizations to exchange ideas for local economic development and governance.

In Chenni, one of the young constituents represented an association that works on environmental protection of palm forests, a major economic resource for the region. As a result of the conversation, the councilors and citizens agreed on a set of developmental objectives for the municipality that included protecting and promoting palm grove growth.

In Zarat, where civil society representatives had never been invited to municipal council meetings and where the relationship between local government and NGOs has been tense, Ghodwa Khir organized the first meeting for the two sides to discuss opportunities for collaboration and local development priorities. The council agreed to invite associations to subsequent meetings and developed a contact list for local organizations that are interested in being involved in municipal affairs.

During an informal community dialogue in Hamma, the mayor nominated one of the councilors to be responsible for relations with civil society so that citizens and civic associations have a direct contact on the council.

According to Lemdani, “other municipalities have been calling to ask us to help organize the same sort of facilitated meetings with constituents in their own municipalities.  This proves the success of our small project in providing value to constituents and the municipal councilors.  Also, based on our success, other organizations in Gabès are starting to copy our style of activities, which is a very good thing for the success of Tunisia’s experiment in decentralized local governance.”

As part of Smart Solution’s approach to providing interior communities with information about municipal elections and local government, the Sidi Bouzid-based organization developed partnerships with 16 grassroots associations across the interior governorates of Sidi Bouzid, Kasserine and Kairouan to maximize outreach in local communities.  Following local elections, Smart Solutions is leveraging its network of grassroots organizations to train and empower activists in center-west Tunisia to engage with new municipal councils on local governance. 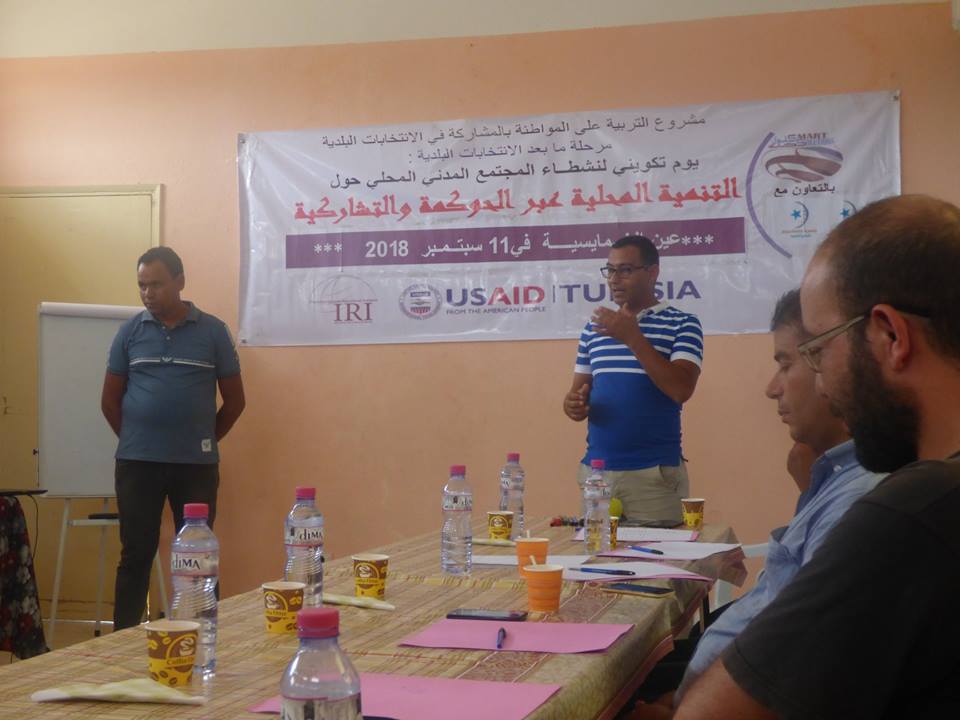 In Sidi Bouzid, the birthplace of the Tunisian revolution, Smart Solutions convened over 30 representatives from eight local associations and four new municipal councilors in July to discuss participatory approaches to developing the municipality’s Annual Investment Plan (PAI), a roadmap for local development projects. Following the workshop, the group met with the municipal council to present their ideas for the PAI and recommend ways to include citizens in the governance process.

Smart Solutions applied a similar approach to the municipalities of Cebella (Sidi Bouzid) and Menzel Mhiri (Kairouna), where they brought together members from grassroots organizations with newly-established municipal councils to collaborate on a community outreach plan, introduce municipal councilors to local leaders in civil society and discuss development priorities.

“In all of the municipalities, our project provided the first and only opportunity for constituents to meet their new representatives. This is historic for Tunisia and we were responsible for it,” said a representative of Smart Solutions. “Of course, there are major issues prohibiting the municipalities to function in the way they are designed to on paper. Funding, know-how, infrastructure… make this project of decentralization and local democracy a long and hard road…So this makes our governance training for local associations and our public dialogues even more critical during this period.”

Smart Solutions is also empowering the local organization with which it collaborates to help them constructively engage new municipal councils. The representative continued: “Another outcome [of the project] is that the local associations [that] we trained and partnered with to hold the public forums now possess the ability to continue doing this work on their own and have gained recognition in their community as well as new skills and capacities.  On top of that, the councils see the benefit of working in partnership with civil society and expressed their desire to continue working closely with these associations.”

As new municipal councils across Tunisia undertake the responsibilities of local governance, Ghodwa Khir and Smart Solutions are developing models for effective civic education that other grassroots organizations can follow. In order for a decentralized government to deliver on citizens’ demands and for Tunisians to trust in the local governance process, local civil society is critical. It plays an important role in fostering dialogue between citizens and their elected officials and building the legitimacy of local governing institutions that is necessary for Tunisia’s democratic transition to succeed.