Venezuela is in shambles. On top of starvation, hyperinflation, and spreading disease, the country’s entire electrical grid failed March 7, thanks to years of deferred investment and questionable maintenance.

Prior to the blackout, surveys showed that some 85 percent of respondents wanted de facto president Nicolas Maduro and his socialist government gone. No doubt that number has since increased. Any garden variety dictator would be on a plane by now. But not Maduro.

His fate lies in the hands of those who control the guns—Venezuela’s security forces. Their numbers are huge and contemplate more than just soldiers and police. Controls are mafia-like and respond to more than one master. And although many of the junior officers and enlisted members suffer privations like ordinary Venezuelans, they (and their families) are subject to surveillance and sanctions. Not only do they have watchers within their own ranks, but they are preyed on by political police and Socialist Party paramilitary thugs.

Although actual numbers are subject to dispute, by most accounts, the size of Venezuela’s security forces is huge. Its active military force rivals Brazil’s which has the largest army in Latin America.  Measured by population, Venezuela’s military is proportionally larger with 118 soldiers to 10,000 inhabitants compared to Brazil’s 18. As of 2016, 365,315 were serving in the army, navy, air force, and national guard. An additional 365,046 formed the Bolivarian National Militia—a reserve force that effectively doubles the military’s size, with roots in partisan community councils and a role in controlling the government’s food distribution system.

Besides soldiers, there are thousands of colectivos, motorcycle-riding vigilantes armed by the government and deployed in large cities. Paramilitaries like these were organized into a “border security force” that attacked citizens attempting to carry food and medicine over bridges from Colombia to Venezuela on February 23. More informal still are the pranes, or criminal gangs that run roughshod in Venezuelan prisons, some of whom are said to have links to the military.  That same weekend, members of the Pemón indigenous community of Santa Elena de Uairén on the border with Brazil complained they were attacked by inmates recruited from a nearby prison and dressed in National Guard uniforms.

On the civilian side is the Bolivarian National Police controlled by the Interior Ministry.  Charged to protect citizens (as many good ones try to do), they also engage in repression. About 20,000 strong, they work with the National Guard to keep protesters in check. The Bolivarian National Intelligence Service (SEBIN), serves as the country’s political police and answers directly to the vice president. It reportedly has a USD $169 million budget and is notorious for torturing detainees. In 2017, Maduro created a parallel Special Actions Force that purports to fight crime and terrorism. Armed with Russian and Chinese weapons and often wearing masks, they have been seen attacking the growing ranks of discontented Chavistas in poor neighborhoods—home of Maduro’s Socialist Party base. Thanks in part to politically motivated policing, Venezuela is the most violent country in the world and its capital Caracas is the world’s second most violent city.

Many soldiers and police have patriotic and humanitarian instincts judging from recent desertor testimonies. Yet, what keeps most in line is a combination of fear, distrust, and corruption. After his failed 2002 ouster, Maduro’s predecessor President Hugo Chávez invited Cuban agents to be his watchdogs, believing they would be more trustworthy than the generals who temporarily took him out of power. Some 25,000 Cuban soldiers and agents are now thought to be embedded  throughout the military, police, and top levels of government. Everyone is watching each other, and distrust among senior officers is so high that whenever Maduro meets with them, his security detail reportedly makes them empty their pockets to ensure none are carrying weapons. 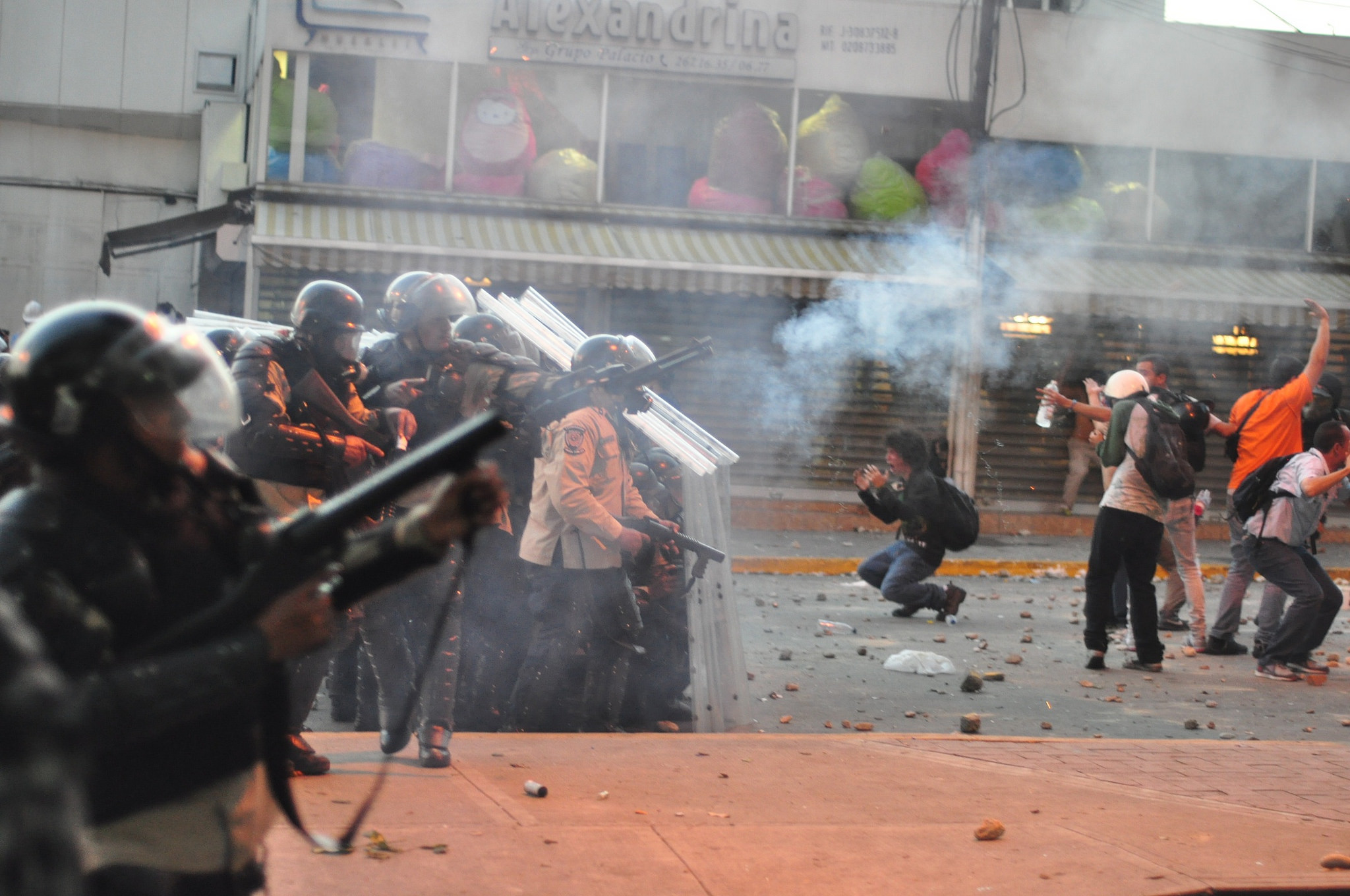 Not all motivations are punitive. Maduro has continued the Chávez practice of promoting lots of officers and giving them lucrative portfolios in exchange for loyalty. Venezuela’s armed forces reportedly now have some 2,000 generals—more generals than colonels—more than three times as many as the United States.  Eleven of them head important ministries while half of the country’s 23 governors are active or retired military. Defense Minister and active Army General Vladmir Padrino López’s portfolio includes ports and mines. National Guard Commander General and former drug czar Néstor Reverol was indicted by the United States for (guess what?) narcotics trafficking. A year later, Maduro made him Interior Minister.

In Venezuela’s southern rural mining arc, National Guard troops have made deals with Colombia’s ELN rebels and remnants of the demobilized FARC guerrillas charging bribes and road tolls to permit illegal extraction operations in sensitive ecological zones. Today, some 4,000 ELN members control gold mining in Venezuela’s Yapacana National Park, making it, as one report called it, a state within a state with “three existential elements: a population, a territory, and power. ”

Golden assignments, control over food distribution, involvement in narco-trafficking and illegal mining have enriched senior officers and tied their futures to the regime’s survival. And while the comacates or middle ranks and enlisted troops may be worried as the country’s situation deteriorates, most of them signed up after the Chávez era began and thus have been indoctrinated with his leftist ideological principles.

Observers hoping to see democracy return to Venezuela may be disappointed that change does not happen faster.  That’s because Maduro’s enablers won’t give up easily. Senior civilians and military in Maduro’s government are wanted for crimes by a variety of nations. For them, turning on him means losing freedom and ill-gotten gains. Cuba, which helps oversee the senior ranks of Maduro’s security forces, depends heavily on Venezuelan oil. Meanwhile, those soldiers and police who have become criminal enforcers know they will have to answer to truth commissions and citizens who might recognize them on the street.

Still, the disastrous national power outage that struck at the beginning of March, the lack of potable water, and the poor state of hospitals may be a tipping point. As lower rank and file members of the security forces face suffering as much as ordinary Venezuelans, they may be, little by little, less inclined to defend Maduro’s zombie regime, and decide to support the country’s democratically elected National Assembly and Interim President Juan Guaidó.  Perhaps they will consider the brighter future they and their families could have in a free society under the rule of law.