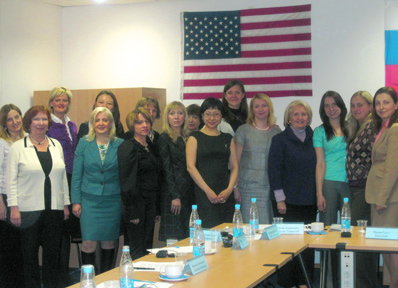 During a recent trip to Moscow US Ambassador Melanne Verveer met with members of WDN‘s newly established Russia country chapter and other young Russian women political and social activists to discuss the role of women in Russian society.  The meeting was organized by the U.S. Agency for International Development and IRI.

During the meeting the women shared their experiences and challenges as activists and spoke about the current state of women’s political participation in contemporary Russia, youth activism, the female face of Russian charity and challenges faced by female lawyers on human rights issues.  WDN Director Michelle Bekkering then announced the launch of the Russian chapter and the opportunities it presents for women’s empowerment in Russia.

Ambassador Verveer was very impressed by the spirit of the Russian participants and encouraged them in their efforts, stating “who we put into power is important; they make the difference.  The isolation of women is politics is therefore a very pressing problem.”

President Barack Obama appointed Ambassador Verveer as the Ambassador-at-Large for the Department of State’s newly established office on Global Women’s Issues in April 2009.  The Ambassador is responsible for the coordination of foreign policy issues and activities relating to the political, economic and social advancement of women around the world.

The Russia WDN chapter was inaugurated in March 2010 and comprises of women activists from six regions in Russia: Chelyabinsk, Kirov, Krosnodar, Moscow, Novosibirsk and St. Petersburg.  Activities the chapter will focus on include lobbying for legislation addressing domestic violence and child pornography, and conducting Women’s Leadership Schools throughout the regions. The chapter will meet again in May to adopt their organizational structure, discuss recruitment and finalize the agenda for implementing their plan of action.