What Happens After an IRI Training?

Throughout Democracy Speaks, you can read about IRI’s political party trainings. You can find out what kind of curriculum we teach, how many people attended and what the training was like.

But a lingering question you may have is: what happens after the training?

Since 2014, IRI has worked with the regional branches of Moroccan political parties. We have provided continuous support to the Agadir branch of the Party of Authenticity and Modernity (PAM) by hosting formal trainings paired with informal consultations.

For the past three years, we have seen PAM take our training content, adapt it and implement it in a way that is effective for them. Meanwhile, we have empowered young, female party members – who are often sidelined in traditional party politics – to play a more active role in the party’s growth, providing them with technical skills and confidence as well increasing their prospects of being seen as a leader in their party branch.

How do you picture a training? People sitting at a table being lectured at? At our workshops, we take a participative approach that encourages participants to think “outside the box.” Partakers debate and ask questions about various party-building tools and methods, which participants such as branch member Bahia appreciated, as it is a “non-boring/[non-]classical approach.”

For instance, at one of our campaign schools we did a session about get-out-the-vote (GOTV). During the training, there was a large discussion about whether the methods covered in the training were relevant or feasible in Morocco. Through a collaborative discussion between party members and our team, the branch came up with ways to adapt the concept to the Moroccan context.

PAM-Agadir has now taken that training to the next level. In the lead up to the 2016 parliamentary elections, they used Google Maps to analyze their electoral district and develop an effective campaign strategy based on where potential supporters live as well as a database with the names of registered voters to track campaign teams’ outreach efforts. This may be common practice in the United States, but it is rare in Moroccan politics.

Regional party branches are typically young and underdeveloped in Morocco and have tenuous connections to the national party office. Additionally, the national office tends to favor Rabat-based members for party positions.

Connecting regional party members to the national party office is important not only so that parties have consistent messaging and platforms, and so that the regional branches are aware of party activities and strategies, but also because it expands access to opportunities for regional members. Often simply sharing stories of active party members increases these members’ visibility as active participants in the party and helps create a connection.

After attending one of our trainings Meryem, Hind and Zineb (all young women) used GOTV techniques that IRI taught them to develop a voter database and tracking software for campaign teams.  After their success, the national party has come to see them as active, strong members of the Agadir branch. Due to their hard work and new connections, they are all now members of PAM’s national council and hold elected positions in Agadir.

We adapted what we learned during the trainings to our own aspirations and to our community context… and we won.

She told IRI staff that IRI’s trainings “gave [her] the opportunity to see politics in a different way…[that] politics should be accessible and everyone has an equal chance to succeed.”

I learned everything from IRI: I memorized all your trainings, from Democracy 101 to the Campaign School, GOTV and Voter Identification.

With IRI support, young women such as Meryem, Hind and Zineb are now more confident and equipped to participate actively in politics.

In the post-election period, PAM-Agadir is breaking the mold of becoming dormant until the next campaign period. The branch has demonstrated that it is not only eager to learn IRI-taught skills and best practices when it will gain them votes right before an election, but also so that the party branch can become more professional, independent and effective. During a consultation with the branch this spring, our team noticed that the branch used sign-in sheets similar to the ones distributed during IRI trainings to collect attendance. We had emphasized this was an easy way to not only keep track of attendance but also update supporter databases.

The PAM branch is also determined to train all its members by creating a “training department.” Bahia, a young woman who is leading this effort, shared that attending IRI trainings taught her

Moreover, the PAM branch in Agadir plans to share the training material they develop with the national headquarters of the party. This unique step breaks from the traditional top-to-bottom flow of information and shows that change can emerge from local branches.

It is exciting to see participants use the information and skills they learned at IRI trainings. But what is even more impressive is how they take all the information, think outside the box and apply it to the work they are doing in Morocco. 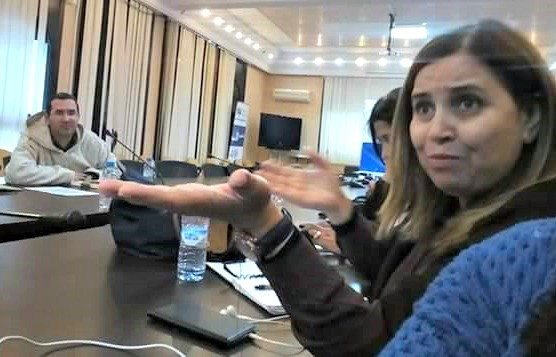