A lack of economic opportunities, ongoing political gridlock, and still simmering ethnic and religious tensions from the wars surrounding the breakup of the former Yugoslavia, have created a climate of discontent and division that has made Bosnia and Herzegovina (BiH) a prime target for propaganda and recruitment by foreign actors and extremists.

IRI is working with local partners to support Bosnian political and civil actors in the prevention of this threat through exposing and documenting disruptive external influence and extremist messaging in the country.

During the past years BiH has experienced an intensification of extremist propaganda targeting the country from abroad. This has come from both religious extremist groups like ISIS who seek new recruits, as well as Russian-oriented nationalist and separatists that aim to undermine the federal state and its Western orientation. The dual challenges of religious and nationalist extremism in BiH are intertwined, as each fuels the other in a positive feedback loop of radicalization. For example, displays of Islamic religious extremism in a Bosniak region are used by Serb nationalists to promote separatism, which is in turn used in propaganda by Islamic extremists to promote further militancy. External extremist propaganda and interference in BiH therefore has the potential to rapidly exacerbate religious and ethnic tensions between communities, threatening the country and wider region’s still fragile peace and stability.

Despite this urgency, there continues to be a lack of understanding of the true nature and extent of external extremist influence and messaging in BiH. The issue is often the subject of wild speculation and/or manipulation by parties on all sides, who have been known to either exaggerate or downplay the level of extremist infiltration for ulterior political motives. As a result, there often exists a level of distrust, misinformation, and confusion that makes it difficult for the country to come together and constructively address the issue.

The first step therefore in developing an effective strategy to understand and counter external extremist influence in BiH is to provide political and civil actors across the spectrum with unbiased and credible data and documentation.

To this end, IRI is conducting public opinion polling, focus groups and social media monitoring across BiH in order to examine and better understand the drivers and mediums of external extremist influence targeting the country. Working with a coalition of broad-minded leaders, our polling information is being shared with Bosnian policy makers and civil society actors. It is our hope that this insight will lead to constructive dialogue and eventually be a catalyst for the development and adoption of effective strategies to counter extremist messaging.

Through its Center for Insights in Survey Research, IRI recently released a new public opinion poll and the results were somewhat heartening, in that although it was shown there were serious divisions among communities, especially in regards to foreign policy, Bosnians were resolutely united in their rejection of religious extremism. A solid 89 percent of Bosnians responded as having a “mostly negative” opinion of the Islamic State. This sentiment held true across all ethnic groups and regions. A majority of Bosnians (56 percent) also voiced support for a secular state. These are indications that despite being targeted, the majority of the population has remained resilient to external extremist influence and messaging.

The poll further showed that rather than dwelling on ethnic or religious divisions, Bosnians are primarily concerned about more day-to-day issues such as the economy. More than half of all respondents (55 percent) rated unemployment as the “biggest problem facing the country”, followed by corruption and bribery (9 percent). Bosnians were again relatively united in these responses, with unemployment by far the biggest concern in all entities and among all ethnicities.

Recognizing this consensus, political leaders on all sides should find common ground and work together to improve basic quality of life issues in BiH. Promotion of economic opportunities and good governance could be instrumental in dampening the environmental factors that create extremism. IRI’s poll showed that the majority of Bosnians (57 percent) believe lack of economic opportunity and poverty are the primary reason Bosnians leave the country to fight in foreign conflicts such as in Syria and Iraq.

The best way to prevent extremism is ultimately to solve the deep economic and social problems that fuel these sentiments. In BiH this will require cooperation, development, and a much needed post-war reconciliation. However, this is unlikely to succeed if outside actors such as Russia and ISIS continue to influence and interfere in the internal matters of BiH by exacerbating ethnic and religious tensions to further their own agendas. It is critical for policy makers, civic actors, and international partners in BiH to work together to identify and counteract external extremist messaging and to facilitate reconciliation, so that the country may ultimately have the peace and prosperity that the Bosnian people so urgently desire and deserve.​ 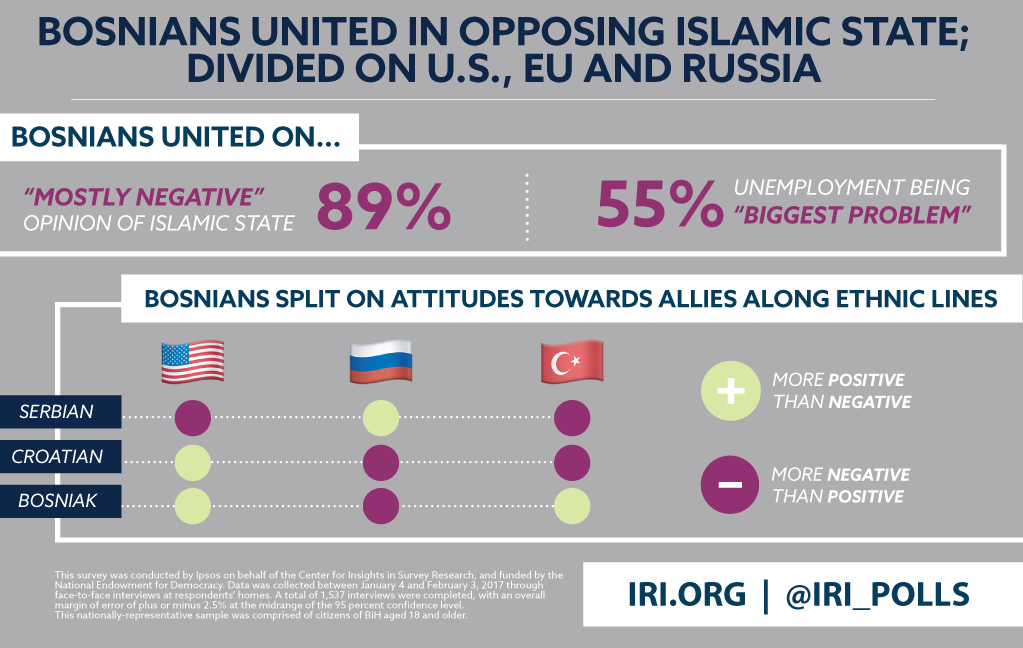