Working Toward a More Responsive Parliament in Turkey

With nearly 80 percent voter turnout, Turkey’s citizens are clearly committed to participating in the electoral process. However, these same citizens often have little, if any, access to their government— a reality that’s emblematic of a much wider problem in Turkey. Without the proper infrastructure to connect people to power, Turkey’s legislature cannot represent its constituents.

As Turkey’s executive branch has sought to expand its power and increase its control over parliament, a strong legislature equipped with the tools to respond to citizen concerns is more critical than ever. Despite President Recep Tayyip Erdogan’s recent centralization efforts, Turkey’s parliament still retains the independence to be responsive to the public and push for policies that echo its demands. To make this possible, a local partner of the International Republican Institute (IRI), the Freedom Research Association (FRA), has launched a constituent-relations website to connect voters with their representatives and enhance the parliament’s accessibility and accountability.

In the corridors of Turkey’s Grand National Assembly, an advisor to a Member of Parliament (MP) told us about the high volume of messages they receive from constituents across Turkey on subjects ranging from human rights issues to infrastructure management and employment hurdles. “We need a documentation system to file people’s concerns pertaining to legislation and refer them to the right officials in a systematized capacity,” the advisor said. Over the past year, the office of the MP for which this advisor works received 1,700 messages from communication channels including social media, fax and the mail. Keeping up with them has become a daily struggle.

This insight motivated Turkey’s Freedom Research Association (FRA) to create a constituent relations website called Meclisteyiz.com (“We Are in Parliament”) that strengthens communication between Turkish citizens and their representatives. The FRA is an Ankara-based, non-governmental organization that promotes research-based public policy and citizen-centered projects.

Within hours of its launch in May 2020, the website received 1,500 views – although some of its users were skeptical about its long-term efficacy. “What can this website accomplish as many of us feel our messages to parliamentarians cannot have an impact on legislation in this new system?”, one participant asked during the launch event, reflecting widespread concerns that the parliament has been subordinated to the executive and thus will not reflect the priorities of constituents. 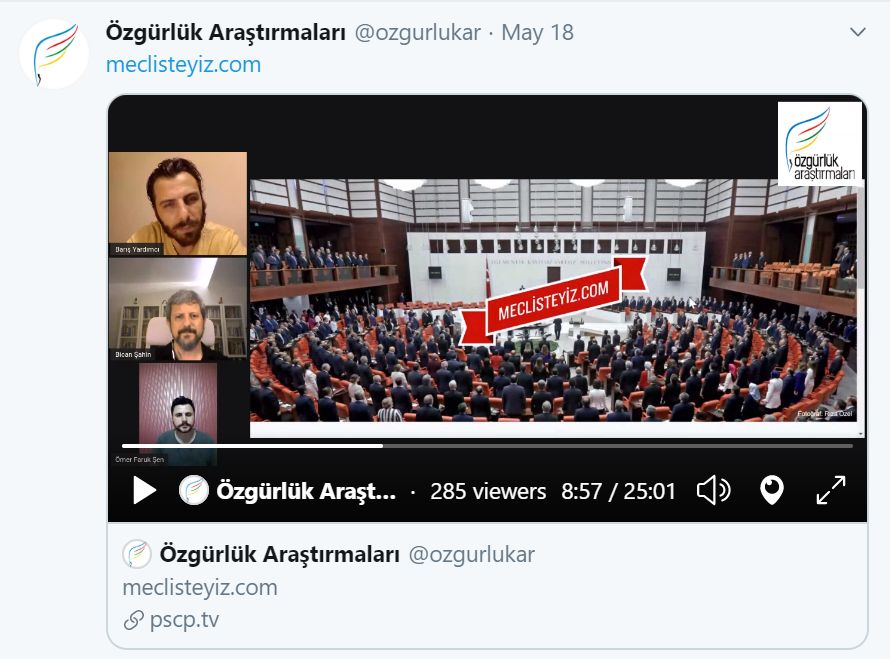 According to Bican Şahin, the chair of the FRA:

“Political freedoms and political participation have deteriorated within the last years. Following the constitutional amendment of 2017 and a shift to an executive presidential system, the parliament has become a secondary organ. However, the participation of citizens in the political process has always been limited in Turkey. People used to take a night bus from their cities to Ankara, arrive in the morning and form queues at the doors of the parliament just to meet with their representatives and convey their message. We all have memories of this. In creating this website, we wanted our citizens to not only reach their lawmakers more easily but also feel empowered to make policy suggestions and participate in the process.

We wanted to strengthen the participation of the citizens in the legislature, which is an important mechanism of checks and balances and separation of powers. When the legislation becomes stronger (by virtue of increased citizen engagement), its voice to the executive branch can be heard more effectively.”

In order to facilitate citizen engagement, Meclisteyiz.com also contains features that allow citizens to propose legal changes, submit petitions and launch campaigns. These tools enable citizens to address their concerns over the diminished power of Turkey’s parliament after the constitutional referendum of 2017 and help overcome the absence of an effective channel for voters to remain involved in the legislative process. Overall, the website serves as a reminder that the people do have power over parliament and their representatives are meant to be accessible.

To ensure optimal usability for the parliamentarians and that their staff is equipped to respond to the needs of citizens, the developers of Meclisteyiz.com opened the website in its construction phase to ten selected advisors from the ruling party and a variety of opposition parties. The FRA incorporated their suggestions into the website that are designed for the parliament, and MPs and staff can now manage submissions and respond to requests systematically as well as open their legislative process to voters’ feedback.

This closer engagement between public officials and local communities reinforces the legislative branch and has the potential to help Turkish citizens push back against the authoritarian tendencies of the executive branch by strengthening parliamentary accountability.