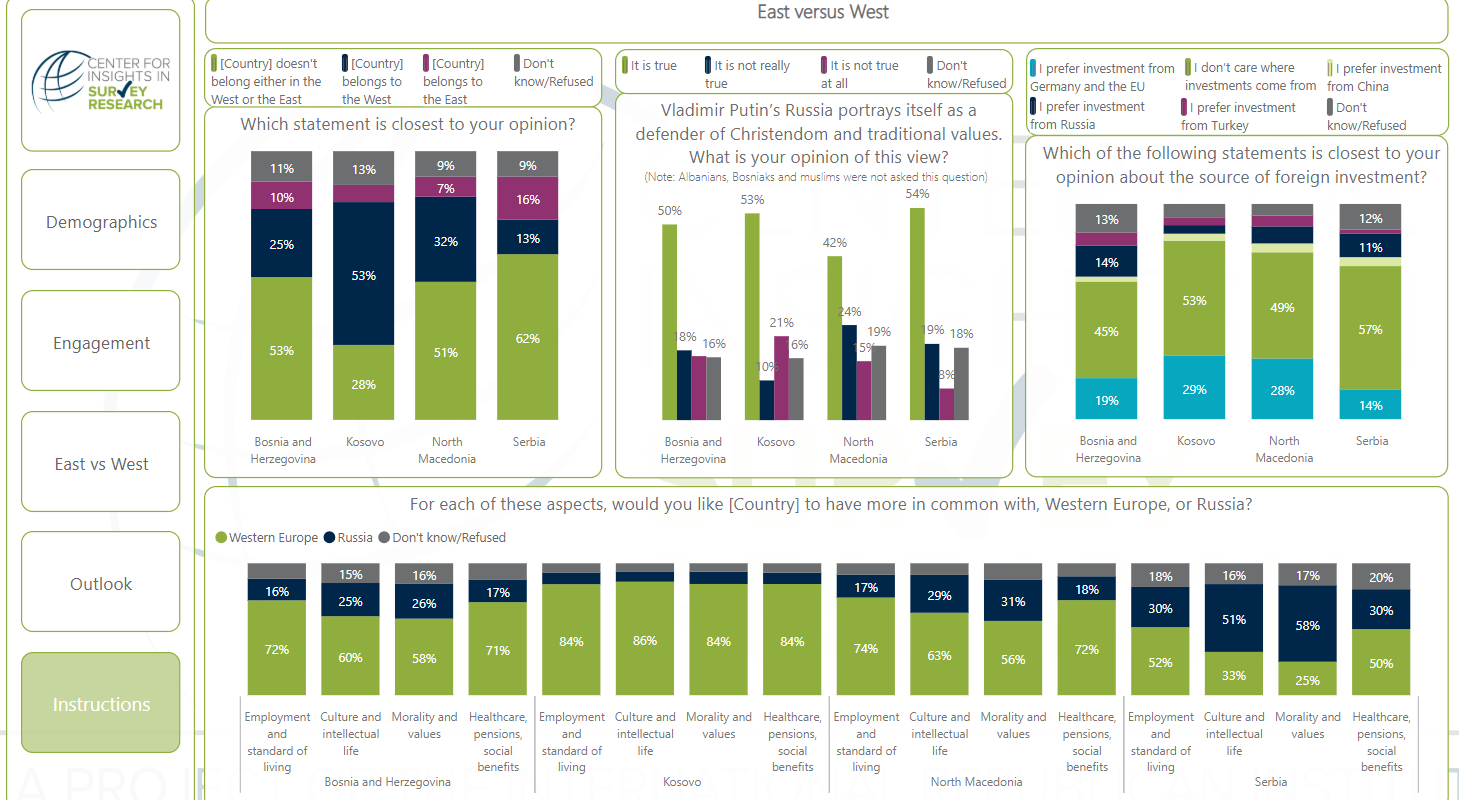 Washington, DC—A new poll by the International Republican Institute’s (IRI) Center for Insights in Survey Research of Kosovo, Bosnia and Herzegovina (BiH), North Macedonia and Serbia reflects a broad consensus that these countries belong to neither the West nor the East. Despite this attitude, the survey suggests that opportunities for engagement by Western institutions exist across the region.  Check out our new interactive data dashboard here for customized insights into the poll.

“These results clearly show that the great power game is underway in the Western Balkans and that people in the region are torn over how to align themselves,” said Jan Surotchak, IRI Senior Director for Transatlantic Strategy. “However, the data also indicates that increased Western engagement by transatlantic institutions can help to bring these countries firmly into the fold of the democratic West.”

With the exception of Kosovo (53 percent), respondents from BiH, North Macedonia or Serbia generally do not feel that they belong definitively to either West or East. The survey indicates that a majority of citizens in Kosovo, Bosnia and Herzegovina, and North Macedonia broadly favor a Western approach to “morality and values” and “culture and intellectual” life, while Serbia favors a Russian approach. On “bread and butter” issues such as employment, healthcare and social benefits, a majority of respondents across all four countries wish to have more in common with the West than Russia.

Although affinities toward the West and East are complex, the data indicates that there is an appetite for further Western engagement, which respondents associate with economic prosperity. A majority in each country favored joining the EU (Kosovo: 85 percent; BiH: 72 percent; North Macedonia: 68 percent; Serbia: 50 percent). Similarly, many respondents favor some level of engagement with NATO (Kosovo: 91 percent; North Macedonia: 87 percent; BiH: 67 percent; Serbia: 49 percent).

The poll reflects long-standing attitudes of pessimism and distrust across all four countries. With the exception of Kosovo, a majority in each country do not think that young people have a good future in their country (BiH: 91 percent; North Macedonia: 79 percent; Serbia: 63 percent). All four countries have widespread perceptions of media bias, with a majority in each reporting that the media distorts information.

The survey was conducted on behalf of the International Republican Institute’s Center for Insights and Survey Research by Ipsos Strategic Marketing. Data was collected between November 16 and November 30, 2018 through face-to-face interviews. The total number of interviews consisted of 1,019 Kosovo residents, 1,027 Serbia residents, 1,019 BiH residents and 1,026 North Macedonia residents aged 18 years and older. The margin of error does not exceed plus or minus 3.4 percent for Kosovo, 3.2 percent for Serbia and BiH and 3 percent for North Macedonia at the mid-range with a confidence level of 95 percent. 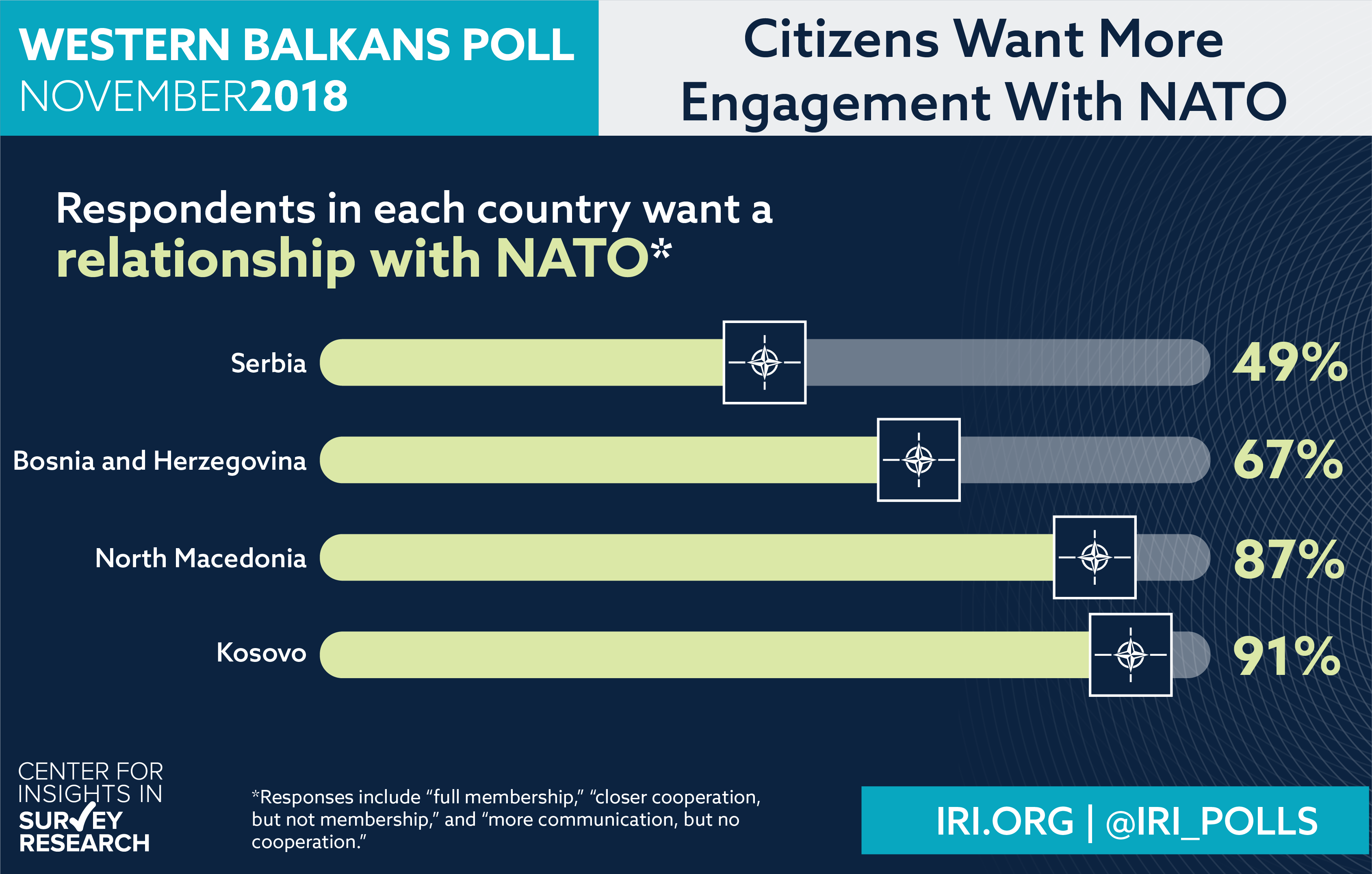 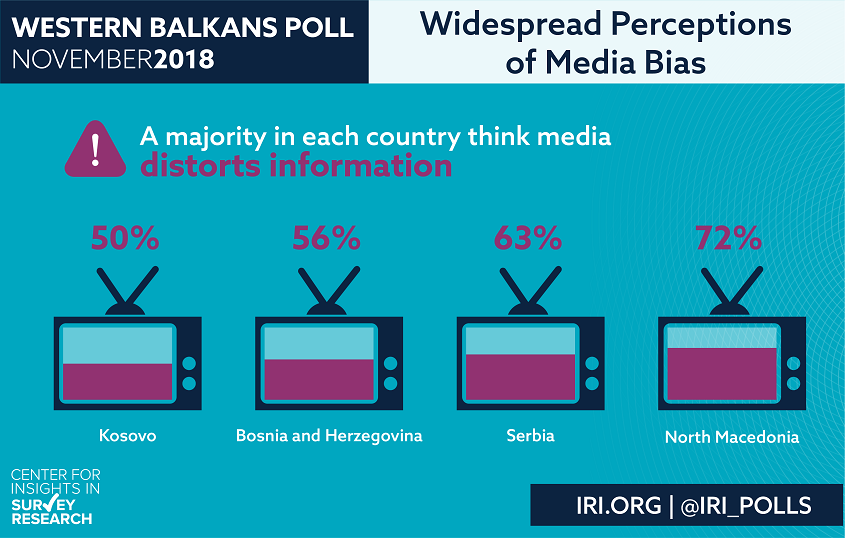