Tbilisi, Georgia – According to a new poll released by IRI, Georgians express a strong desire to deepen ties and pursue closer relations with the West.  The poll also finds less optimism and increasing concerns regarding the economy and territorial integrity. “In the face of growing concern over the economy and territorial integrity, Georgians continue to believe in the importance of closer ties with Western democracies,” said IRI President Mark Green. 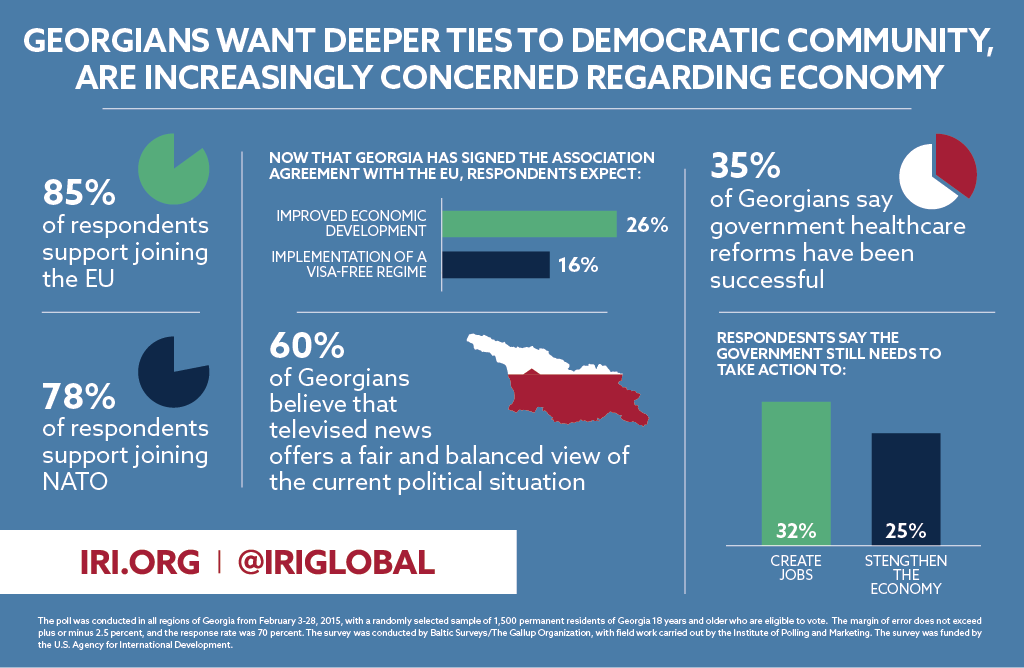 Georgians are less optimistic about the future than a year ago, with 55 percent saying the country is on the wrong track, and 25 percent responding that Georgia is on the right track.  Economic concerns appear to be a contributing factor, as well as concerns over security and territorial integrity.

Georgians Want Deeper Ties to the West
Georgians continue to look to Europe and the West. The IRI poll showed that 85 percent of respondents support Georgia’s membership in the European Union.  Similarly, 78 percent advocate Georgia joining NATO.  This support is broad and encompasses all demographic sectors.

Georgians Concerned Over Territorial Integrity
Seventy-six percent of Georgians feel that the Russian Federation poses a threat to their country, and 88 percent say that Russian aggression toward Georgia is ongoing or likely to resume.

Trust in Institutions
The most trusted institutions in Georgia continue to be the Orthodox Church with 91 percent, the Army at 87 percent and Georgian Media at 82 percent.  Again, this is consistent among all demographic sectors.

Methodology
The poll was conducted in all regions of Georgia from February 3-28, 2015, with a randomly selected sample of 1,500 permanent residents of Georgia 18 years and older who are eligible to vote.  The margin of error does not exceed plus or minus 2.5 percent, and the response rate was 70 percent.

The survey was conducted by Baltic Surveys/The Gallup Organization, with field work carried out by the Institute of Polling and Marketing.  The survey was funded by the U.S. Agency for International Development.