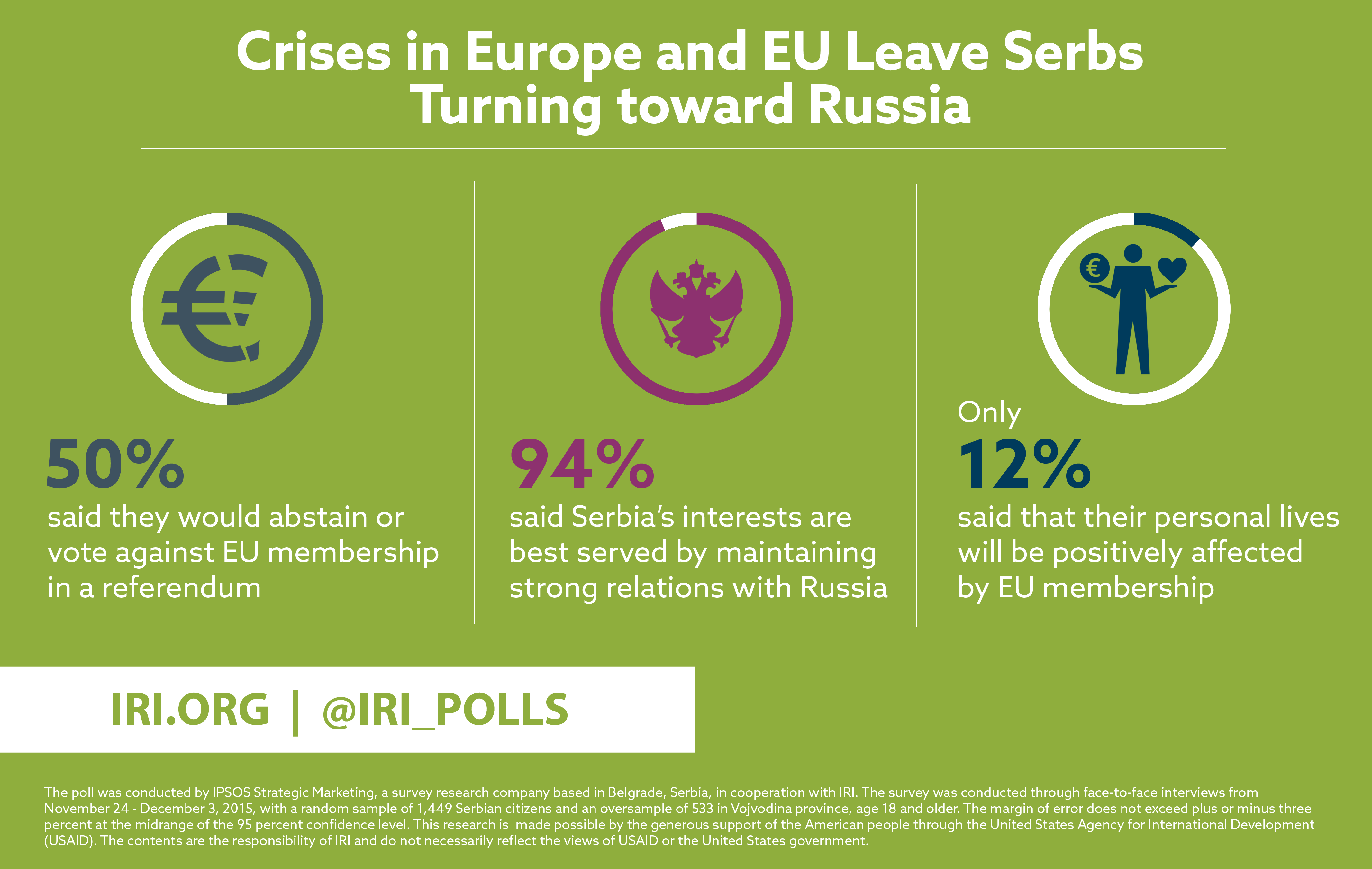 – According to a new poll released today by the International Republican Institute’s (IRI) Center for Insights in Survey Research, Serbian citizens are questioning their commitment to the path of European integration and Western orientation while voicing strong support for ties to Russia.

Support for Membership in European Union Continues to Decline

In November, only 49 percent of Serbs supported membership in the European Union (EU), a five point drop since July and a decline from 76 percent in October of 2009.  The Center for Insights poll suggests some of the factors driving this decline in support for the EU.

Serbs remain unconvinced that they will see tangible benefits from EU membership.  Only 12 percent of Serbs thought their life would be positively affected by membership, while 45 percent thought there would be no benefit at all.  Of those interviewed, 50 percent said they would vote against membership or abstain in a referendum on Serbia’s EU membership. When asked why they oppose membership, 35 percent said they didn’t believe in the values the EU brings. Thirty-two percent said that after the experience of Greece and Spain, they didn’t trust EU membership would bring them any good.  Furthermore, 51 percent of Serbs thought the EU was too costly while 41 percent associated the EU with a loss of sovereignty and independence.

“With Serbia at risk of moving away from the West, Washington and Brussels must re-engage in the region to ensure it remains on democratic path,” said Jan Surotchak, IRI’s Europe director.  “Continued support would show Serbs that the best chance of prosperity and openness lies with Euro-Atlantic integration, offering a more hopeful alternative to Russia’s interference.”

Serbs Look to Russia in Search of Economic Prosperity, Security

In light of their ambiguous views toward the EU, Serbs are looking to other partners to guarantee their independence and economic prosperity.  First and foremost among those is Russia.

An overwhelming 94 percent of Serbs said that Serbia’s interests are served by maintaining strong relations with Russia, compared to 71 percent who said the same about the EU, and 65 percent who said that strong relations with the United States serve Serbian interests.  Thirty-six percent of those interviewed believed, mistakenly, that Russia is Serbia’s biggest aid donor.  When asked why they saw Russia as the best defender of their interests, 48 percent of Serbs cited strategic balancing concerns (standing up to the West, historical protector, defender of Kosovo), 29 percent cited economic reasons (export markets, energy supplies, investments) and 23 percent cited cultural issues (Russians are our Orthodox brothers).

“Historical and cultural ties have often prompted Serbs to look East,” stated Surotchak.  “However, the recent drift of Serbian sympathies away from Europe and toward Russia is especially concerning.  Serbia is closer than ever before to joining the EU, and benefitting from the rule of law, the investment and market access, and the respect for human rights that can make citizens’ lives richer and more secure.  At the same time, Russia is violating international law, destabilizing governments and undermining human rights from Ukraine to Syria to the Balkans.”

The poll was conducted by Ipsos Strategic Marketing, the Serbian branch of the international research firm, in cooperation with IRI’s Center for Insights in Survey Research.  The survey was conducted through face-to-face interviews from November 24 – December 3, 2015, with a multi-stage, random sample of 1,449 Serbian citizens, age 18 and older, with an oversample of 533 in the northern province of Vojvodina.  The margin of error is plus or minus 2.82 percent at the midrange of the 95 percent confidence level (4.65 percent in Vojvodina).

This research is made possible by the generous support of the American people through the United States Agency for International Development.  The contents are the responsibility of IRI and do not necessarily reflect the views of USAID or the United States government.

The Center for Insights in Survey Research builds on IRI’s two decades of experience in public opinion research and leverages traditional public opinion research and analysis and new tools to help political parties become more responsive to voters, assist elected officials at all levels of government in improving services to citizens, and foster greater participation by underrepresented groups and by citizens generally in the political process.