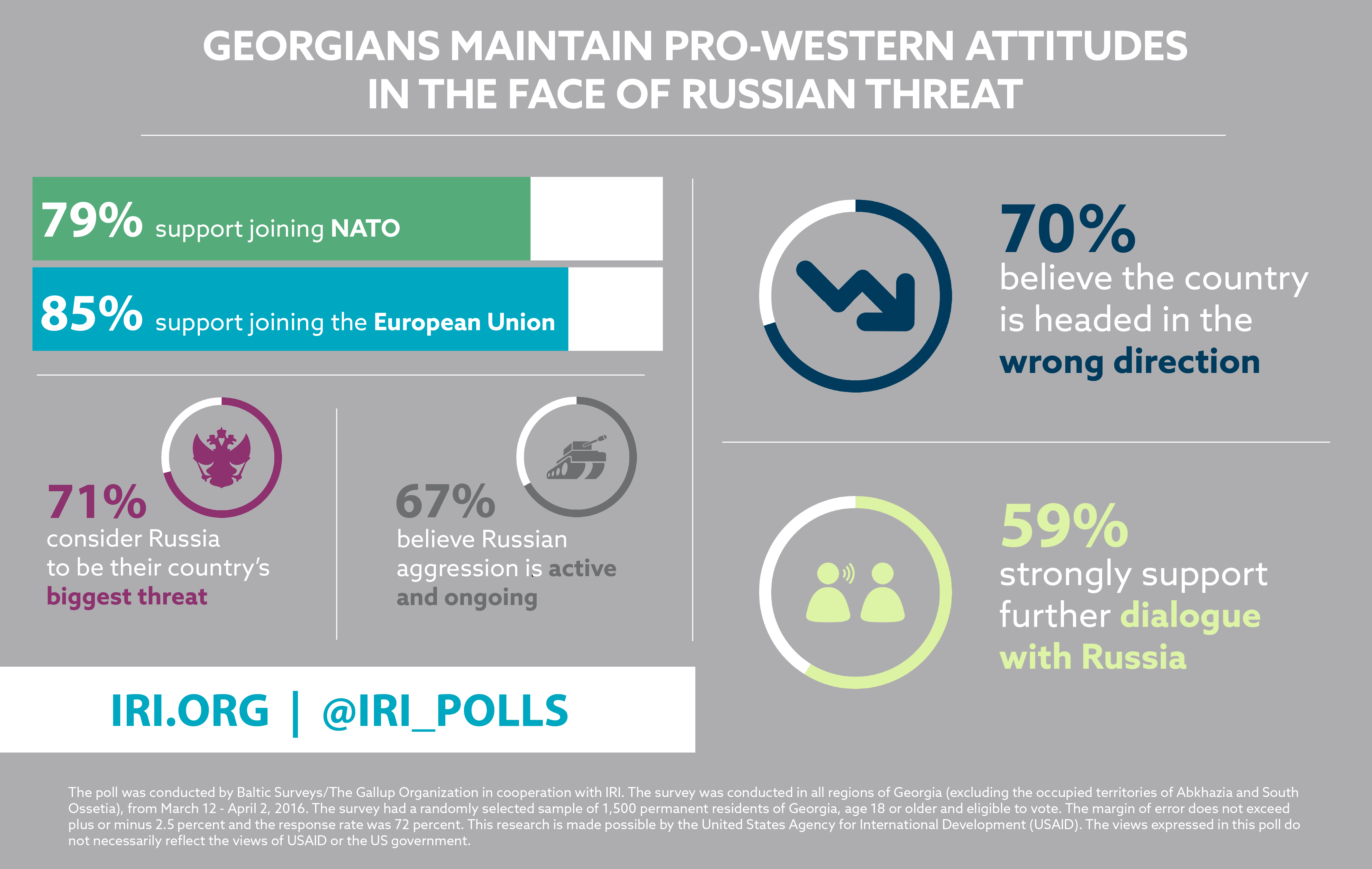 Tbilisi, Georgia—According to a new poll released today by IRI’s Center for Insights in Survey Research, the people of Georgia are overwhelmingly in favor of a pro-Western foreign policy both as a means to stave off Russian threats and to improve their economic prospects.

The ongoing tensions between Georgia and Russia over the Moscow-backed breakaway regions of South Ossetia and Abkhazia continue to weigh heavily on Georgians’ minds.

According to the poll, 77 percent of respondents describe Georgia’s relationship with Russia as “bad” and 67 percent believe Russian aggression is active and ongoing. Russian military forces remain present in the two regions, nearly eight years after a peace agreement was signed.

“For Georgians a close relationship with the West is incredibly important,” said Stephen Nix, IRI’s Eurasia director. “Not only does the West provide a safeguard against Russian aggression, it also offers the promise of economic growth.  Georgians see the West as their link to broader stability overall.”

Aside from the situation with Russia, high unemployment, inadequate infrastructure and rising crime are making Georgians feel increasingly pessimistic about their country.

According to the poll, 70 percent of those surveyed say the country is headed in the “wrong direction”— up 15 percentage points in a year—and 65 percent say the economic situation in Georgia has worsened in the last two months. Georgia’s currency devaluation, high utility prices and high taxes were listed among the main pressures on personal finances.

The poll was conducted by Baltic Surveys/The Gallup Organization in cooperation with IRI.  The survey was conducted in all regions of Georgia (excluding the occupied territories of Abkhazia and South Ossetia), from March 12-April 2, 2016.  The survey had a randomly selected sample of 1,500 permanent residents of Georgia, age 18 or older and eligible to vote.  The margin of error does not exceed plus or minus 2.5 percent and the response rate was 72 percent.  This research is made possible by the United States Agency for International Development (USAID).  The views expressed in this poll do not necessarily reflect the views of USAID or the US Government.