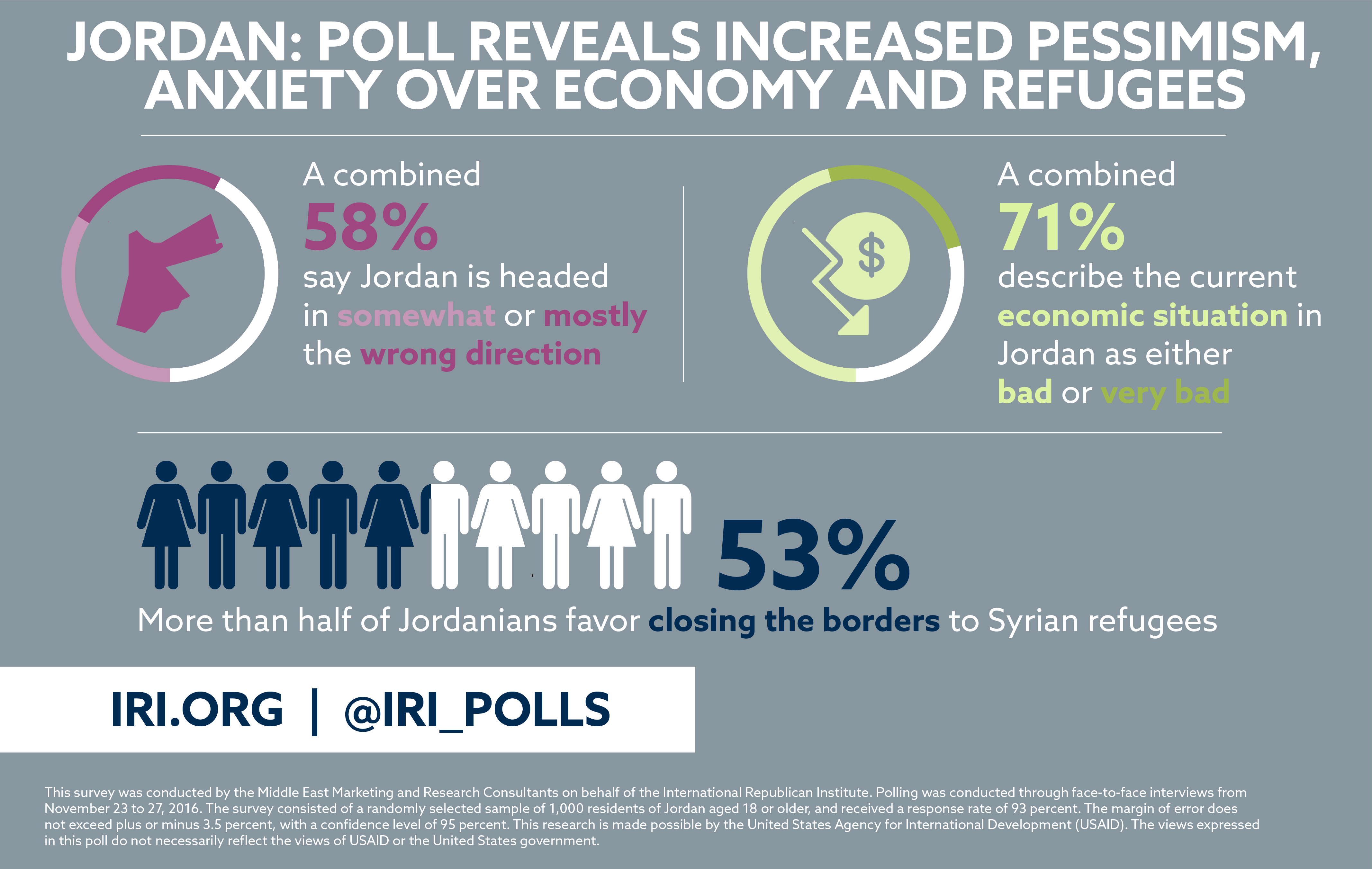 Amman, Jordan—A nationwide poll released today by the International Republican Institute’s (IRI) Center for Insights in Survey Research indicates a sharp uptick in the number of Jordanians who are pessimistic about the country’s trajectory, and increased support for closing the borders to Syrian refugees.

“Consistent with our previous surveys, Jordanians are dissatisfied with the economy, which appears to be linked to the increase in the number of people who feel the country is headed in the wrong direction,” said IRI Regional Director for the Middle East and North Africa, Scott Mastic. “It is clear that the government must take meaningful steps to address the concerns driving these negative poll numbers, such as combating unemployment.”

A combined 58 percent of respondents think that Jordan is headed in “somewhat” or “mostly” the wrong direction (34 percent “somewhat,” 24 percent “mostly”), and a combined 71 percent describe the current economic situation as “bad” (46 percent) or “very bad” (25 percent). In addition, half expect the economic situation to get “somewhat worse” (36 percent) or “much worse” (14 percent).

The pressures facing the country may be contributing to increasing support for closing the border to Syrian refugees—the influx of which has strained Jordan’s resources. The number of respondents who advocate closing the borders jumped 13 points from 40 percent in April 2016 to 53 percent in the most recent survey, while 61 percent believe that attitudes towards Syrian refugees are worsening.

This survey was conducted by the Middle East Marketing and Research Consultants on behalf of the Center for Insights in Survey Research. Polling was conducted from November 23 to 27, 2016 from a sample of 1,000 individuals in face-to-face interviews in their homes.

The response rate for the survey was 93 percent. Six percent of contacts refused the interviewer at the door and 1 percent began the survey but refused to complete it. The margin of error for the survey does not exceed plus or minus 3.5 percent with a confidence level of 95 percent and where p=0.50. Figures in charts and graphs may not add to 100 percent due to rounding error.

This survey was made possible with support from the U.S. Agency for International Development (USAID).