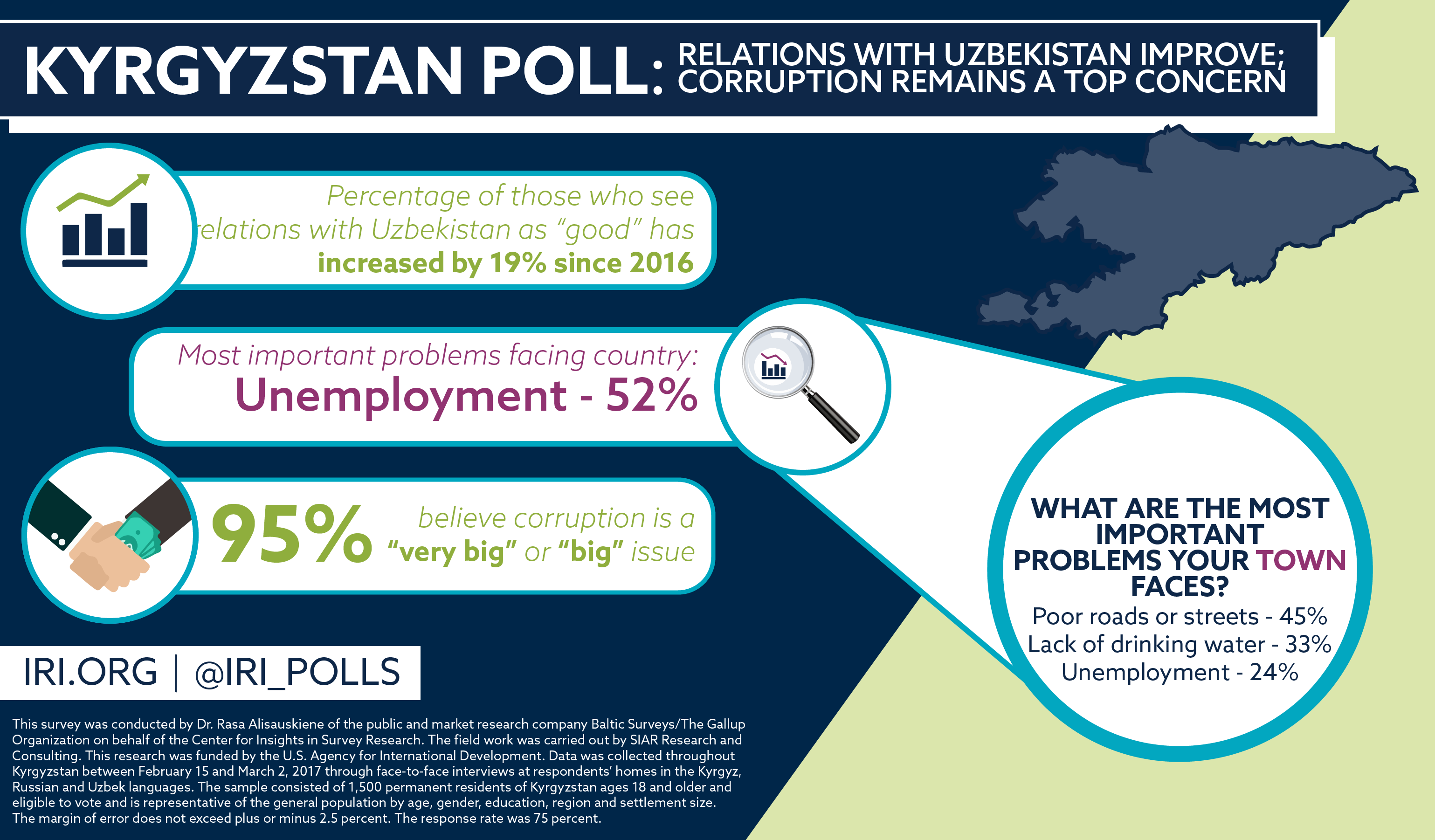 Bishkek, Kyrgyzstan—A nationwide poll released today by the International Republican Institute’s (IRI) Center for Insights in Survey Research indicates a more positive public view of relations with Uzbekistan, as well as an uptick in those who feel their personal financial situation has improved. However, unemployment, corruption and economic development continue to rank as top concerns.

“This survey shows a number of positive signs for Kyrgyzstan’s trajectory, including improved attitudes towards Kyrgyz-Uzbek relations and the economy,” said Stephen Nix, IRI Regional Director for Eurasia. “However, continued unhappiness over issues such as corruption and unemployment suggests that the government should take this opportunity to address these issues in a meaningful way.”

The number of respondents who think relations with Uzbekistan are “good” climbed 19 points from IRI’s previous annual survey, rising to 48 percent from 29 percent in March 2016. This coincides with the increasingly positive media coverage of Kyrgyz-Uzbek relations since Shavkat Mirziyoyev assumed the presidency of Uzbekistan in September 2016.

A combined 40 percent of respondents feel that their households’ financial situation has either “improved somewhat” (35 percent) or “improved a lot” (5 percent)—an 11-point increase from March 2016. In keeping with last year’s findings, a clear majority (65 percent) continue to feel that the country is headed in the right direction.

Consistent with IRI polls dating back to 2005, unemployment, corruption and economic development were rated as the three “most important problems” facing Kyrgyzstan. Unemployment dominates the current list of concerns at 52 percent, followed by corruption (40 percent) and economic development (13 percent). A combined total of 95 percent of respondents think corruption is either a “very big issue” (78 percent) or “big issue” (17 percent), and 77 percent do not feel the government is making a sufficient effort to fight corruption.

This survey was conducted by Dr. Rasa Alisauskiene of the public and market research company Baltic Surveys/The Gallup Organization on behalf of the Center for Insights in Survey Research. The field work was carried out by SIAR Research and Consulting. This research was funded by the U.S. Agency for International Development.

Data was collected throughout Kyrgyzstan between February 15 and March 2, 2017 through face-to-face interviews at respondents’ homes in the Kyrgyz, Russian and Uzbek languages. The sample consisted of 1,500 permanent residents of Kyrgyzstan ages 18 and older and eligible to vote and is representative of the general population by age, gender, education, region and settlement size. The margin of error does not exceed plus or minus 2.5 percent. The response rate was 75 percent. Charts and graphs may not add up to 100 percent due to rounding.