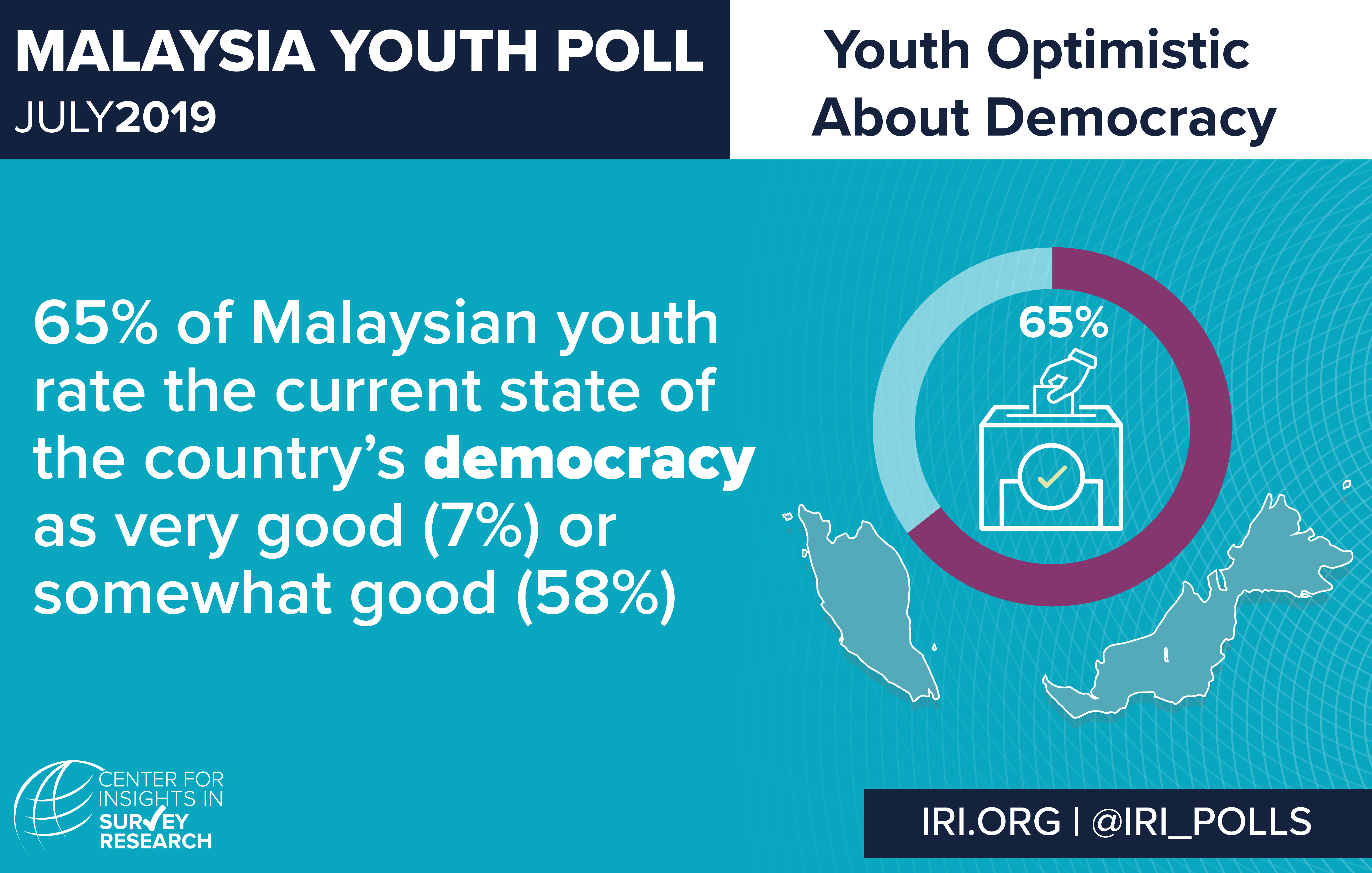 Kuala Lumpur, Malaysia — A new nationwide poll of Malaysian youth by the International Republican Institute’s (IRI) Center for Insights in Survey Research reveals confidence in the state of Malaysia’s democracy and the ability of government to address challenges, despite concerns about the economy and the use of traditional and social media to spread misinformation.

“On July 16, Malaysia made history by lowering the voting age from 21 to 18 years of age in a unanimous parliamentary vote. Now is a unique opportunity for all political forces to continue working together to realize the aspirations of the nation’s youngest voters, particularly when it comes to economic issues,” said Johanna Kao, IRI’s regional director for Asia.

The economy tops the list of priority issues for Malaysian youth. Forty-two percent of respondents rank the economy as the biggest problem facing the country. More respondents report that their personal economic situation has worsened (32 percent) than improved (21 percent) compared to a year ago. A combined 54 percent rate the national government as doing a “bad” (41 percent) or “very bad” (13 percent) job at reducing unemployment, a problem that disproportionately impacts youth. Forty-nine percent believe the economy should be the first priority for the national government to address within the next year.

Malaysian youth, heavily reliant on social media for news, are also worried about the influence of misinformation in the media. A combined 89 percent believe the use of misinformation in the media to influence people’s beliefs and opinions is a “major problem” (61 percent) or “somewhat of a problem” (28 percent). Social media is the primary source of political news for Malaysian youth, and 44 percent of respondents say that social media is the most helpful source to learn about issues related to political affairs in Malaysia, distantly followed by television and the internet (both at 21 percent).

Since 2002, IRI has worked in Malaysia to strengthen the ability of political parties to democratically compete in elections and adhere to practices of citizen-centered governance, to increase youth participation within political and civic spheres and to strengthen the capacity of Malaysia’s civil society organizations. As part of its programming, IRI works to support young, emerging leaders — regardless of political affiliation — to better understand democratic and inclusive values and build their leadership skills to shape the direction of the country’s democratic development.

The survey was conducted on behalf of the International Republican Institute’s Center for Insights in Survey Research by the Merdeka Center. Data was collected between July 2 and July 8, 2019, through computer-assisted telephone interviews conducted from a call center in Selangor, Malaysia. The sample consists of 1,208 respondents aged 18 to 35, with cellphone or landline access, and is representative of Malaysian citizens 18 to 35 nationally. The data was weighted by states, gender, age groups and ethnicity. The margin of error is plus or minus 2.82 percent at the mid-range with a confidence level of 95 percent. The response rate was 14 percent. While this response rate falls outside the parameters generally accepted by IRI, additional data checks did not reveal any particular bias associated with nonresponse. The information in this report has been compiled in accordance with international standards for market and social research methodologies. Figures in charts and tables may not sum to 100 percent due to rounding.