Mark Adomanis Looks at the Findings of IRI’s Ukraine Poll on Forbes.com

The International Republican Institute (IRI) just released the results of a massive 22 city 17,000 respondent poll it commissioned earlier this spring on Ukrainians’ attitudes towards politics, corruption, the economy, NATO, the European Union, Russia, and almost anything else you can think of. The 22 cities in which polls were conducted represent all the regional capitals which are currently under the control of the central government, so essentially the capitals of every oblast in Ukraine outside of Lugansk, Donetsk, and Crimea.

Now Ukraine and its post-Maidan conflict with Russia is an incredibly(!) divisive issue on which there is an extreme level of disagreement among academics, think tankers, financiers, and politicians. Russia in particular and the Former Soviet Union in general have always had a way of summoning strong passions, but the vehemence of recent debates surpasses anything I’ve ever experienced before. Normally staid organizations such as the American Association for Slavic, East European, and Eurasian Studies are now the scene of open rhetorical brawls.

I’m not naive enough to think that the Ukraine issue can or will be “solved,” but it always helps to provide a baseline level of data so that the people from various sides are at least describing the same reality. The IRI poll is an excellent way in which to establish such a baseline.

So what does the poll say? Well the headline figures are the following: 57% of respondents to the poll would choose to join the European Union (versus 13% who want to join the Rusisan-led customs union) while 47% would vote yes in a referendum about joining NATO (versus 29% who would vote no).

At the same time, as the following graphs show, there are still some pretty significant regional differences. On NATO membership the percentage of “nos” ranged from 51% in Odessa to 4% in Lviv. On question of membership in the European Union, the range was, if anything, even greater: 30% of the residents of Odessa, Kharkiv, and Mykolaiv want to join the EU while in Ternopil 92% do. 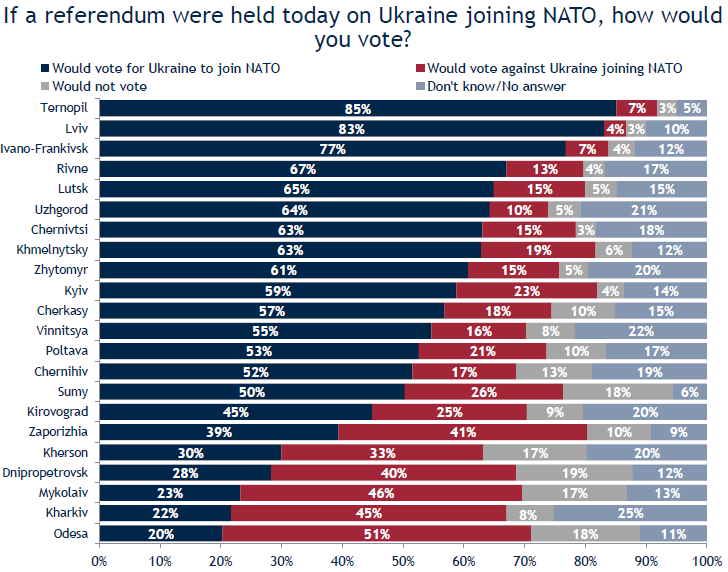 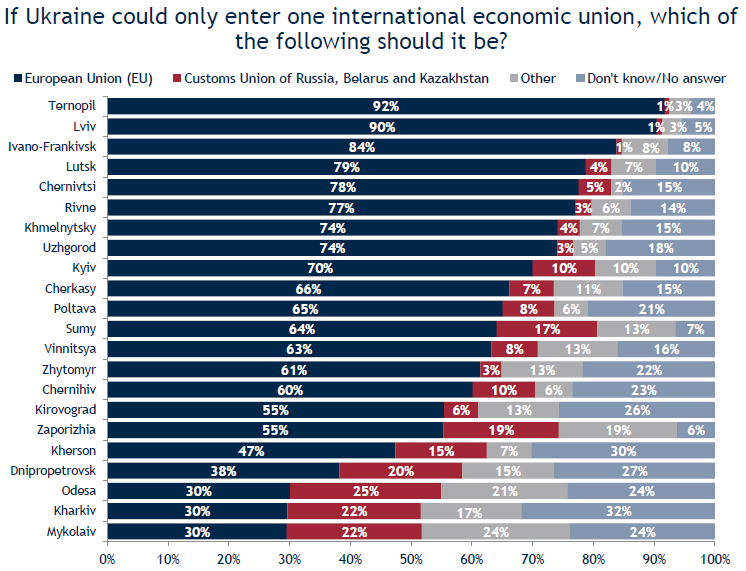 Now, according to Stephen Nix, the head of IRI’s Eurasia program who was kind enough to supply me with the slides cited above, there was actually not a statistically significant difference between the responses of Russian and Ukrainian speakers. This might sound a bit surprising, particularly because of the hysterical warnings from Moscow about the dangers the “fascist junta” poses to speakers of Russian as well as the serious political disagreements about Ukraine’s language laws, but it gels with other polls I’ve recently seen from Ukraine, including polls conducted inside Crimea and the Donbass. It’s not clear if the main dividing line in Ukrainian opinion was ever language, but it certainly doesn’t appear to be the case today.

On the other hand, the differences in opinion between different regions are significant and would easily pass any statistical test. With individual sample sizes of 800, you would essentially never get results that are as far apart as the observed difference between Odessa and Lviv. I’m not going to tell people what precise meaning they should take away from those differences, but these differences do exist. I would also respectfully suggest that given their apparent magnitude they don’t seem likely to disappear anytime in the near future.

Now there are some caveats. The most traditionally pro-Russian areas of Ukraine were not included in the poll because, um, they’re currently being occupied by Russia. It also seems likely that the poll’s focus on large urban areas has resulted in slightly more pro-Western results since, by definition, more traditionally politically and socially conservative rural areas were excluded. Finally, there is an argument that in the current environment (a couple of pro-Russian activists have been killed) people might feel compelled to say what they think is the “right” answer.

But even with these caveats, which range greatly in merit, Ukrainian public opinion does appear to be moving in an increasingly pro-Western direction. Previous IRI polls, which also excluded the Donbass and Crimea, did not show such strong support for NATO or the EU. Is Ukraine still divided? Yes. But it’s less divided than it used to be.