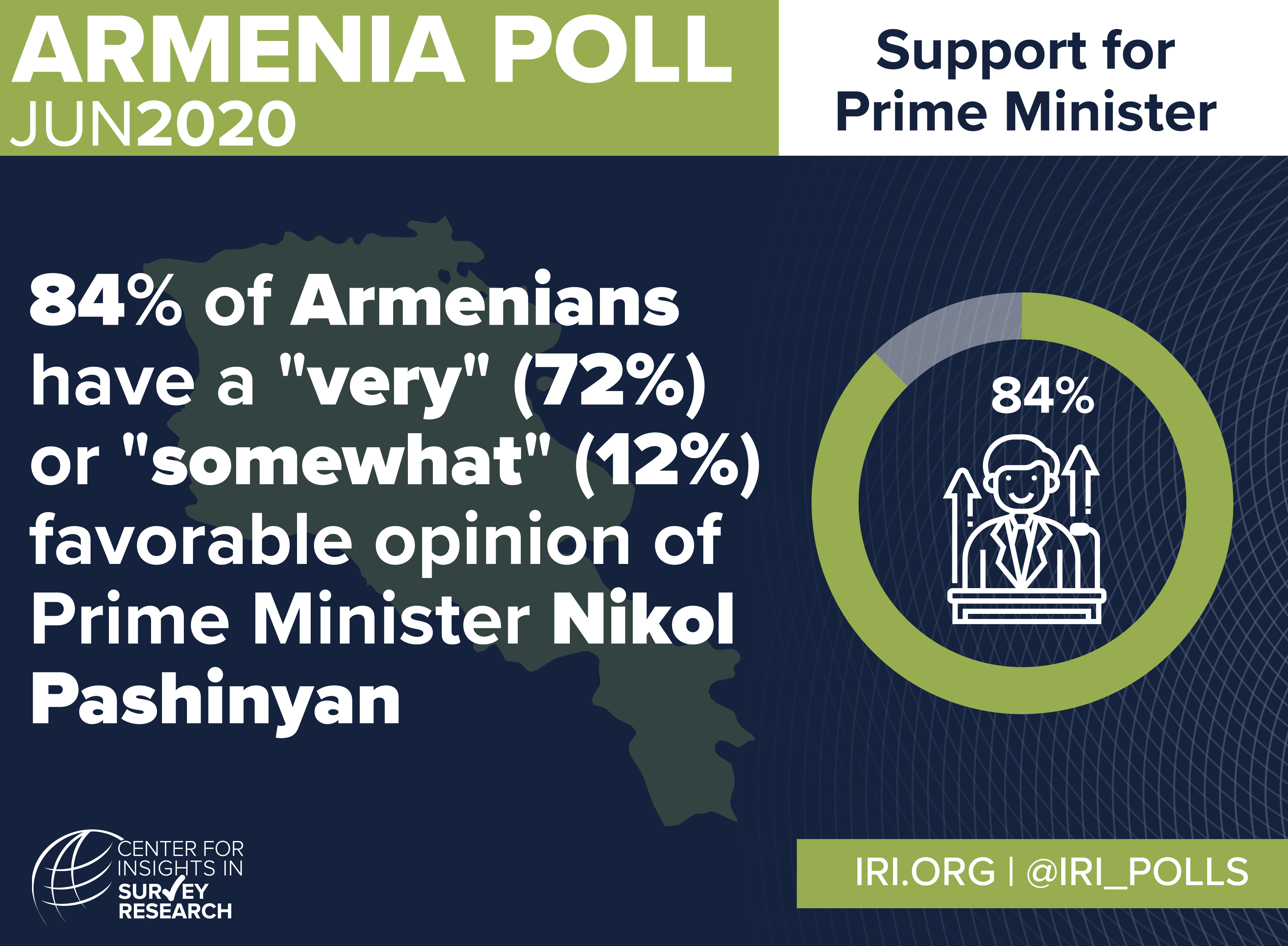 Yerevan, Armenia— A new nationwide poll of Armenia by the International Republican Institute’s (IRI) Center for Insights in Survey Research shows strong support for Prime Minister Nikol Pashinyan and his government’s management of the COVID-19 pandemic.

“Despite the ongoing challenge posed by the health crisis, the Armenian public’s approval of the prime minister remains extremely high,” said IRI Regional Director for Eurasia Stephen Nix. “It is vital that the government continues to pursue policies that maintain the confidence of the public, and that it builds upon this goodwill by continuing its reform agenda.”

According to the survey, 84 percent of Armenians have either a “very” (72 percent) or “somewhat” (12 percent) favorable opinion of the prime minister. Furthermore, a majority support the government’s management of COVID-19, with 48 percent “very” and 23 percent “somewhat” satisfied with the response. When asked how state institutions have handled the pandemic, respondents expressed improved opinions of the police (65 percent), the Ministry of Health (64 percent) and the Prime Minister’s office (58 percent).

Despite these positive responses, 90 percent of citizens are either “very” (71 percent) or “somewhat” (19 percent) concerned about the economic fallout of COVID-19. “While the government has experienced high approval ratings since the onset of COVID-19, it must address these acute economic concerns in order to effectively respond to citizen needs,” Nix added.

The poll also indicates that nearly 50 percent of Armenians encounter misleading or false information regarding COVID-19 in the media “daily” or “almost daily.” While 61 percent of citizens remain either “very” (32 percent) or “somewhat” (29 percent) satisfied with the media, Armenians with higher education and those who live in Yerevan were less likely to be “very” satisfied with the media. In contrast, a majority consider government officials and health professionals to be the most trustworthy sources of information on the virus.

The survey was conducted on behalf of IRI’s Center for Insights in Survey Research by Breavis (represented by IPSC LLC) between June 18 and June 25, 2020. Data was collected through phone interviews with 1,517 Armenian residents aged 18 or older. The response rate was 60 percent and the margin of error does not exceed plus or minus 2.5 points for the full sample. The data is weighted for region, age, gender and urbanicity level. This survey was made possible by the generous support of the U.S. Agency for International Development (USAID).