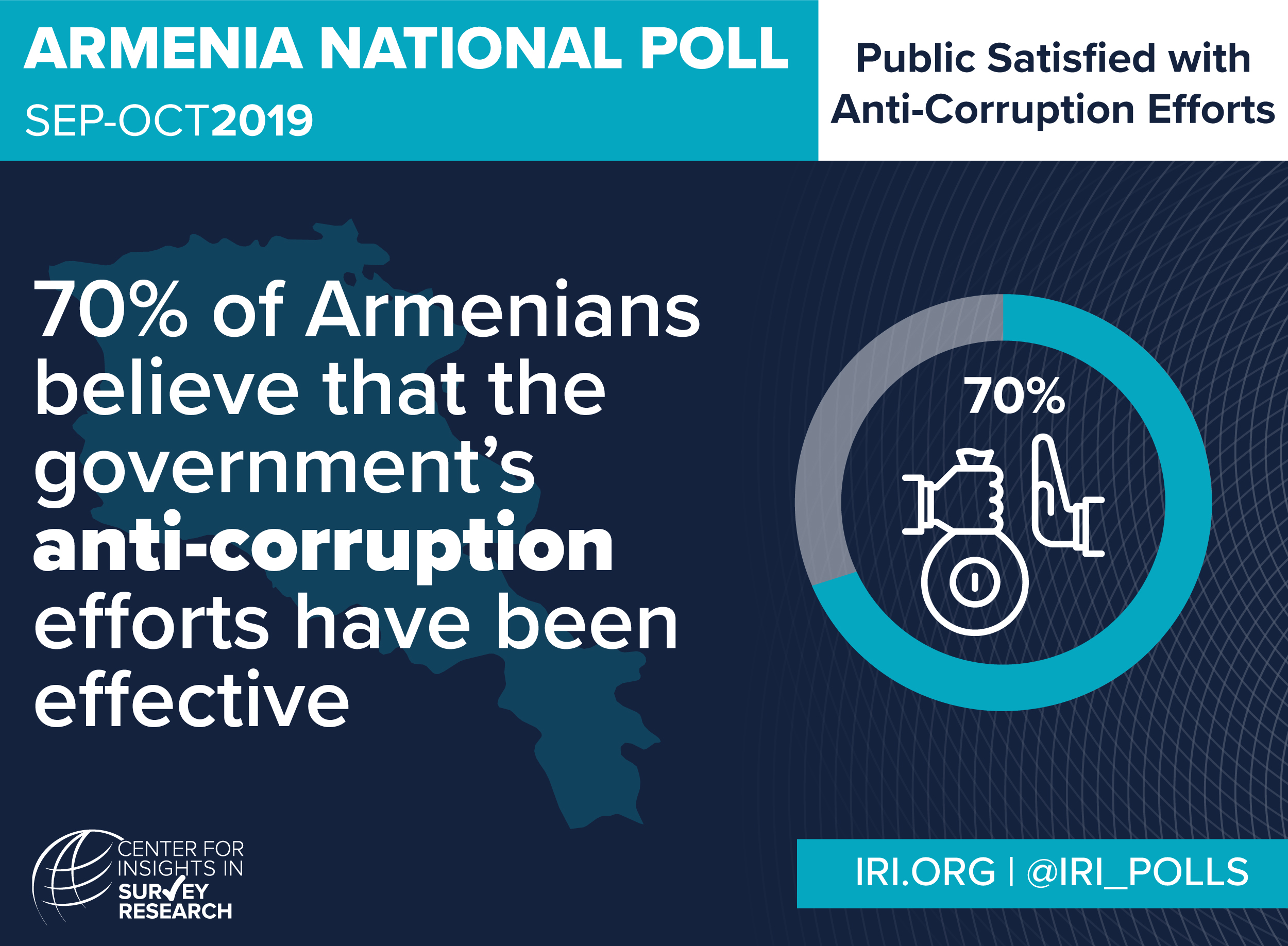 Yerevan, Armenia – A new nationwide poll of Armenia by the International Republican Institute’s (IRI) Center for Insights in Survey Research shows strong support for the government’s anti-corruption efforts and an optimistic view of the country’s trajectory. However, citizens also wish to see further action on socioeconomic concerns and transitional justice. Additionally, 66 percent think that the government is doing enough to fight corruption (up from 59 percent), and 70 percent think that the fight has been effective.

“Recent charges against former high–level Armenian officials highlights how serious the problem of corruption was under the previous regime,” said Stephen Nix, IRI Regional Director for Eurasia. “It is encouraging to see that the data reflects a positive view of the new government’s anti-corruption efforts.”

Poll results indicate that Armenians have a positive view of the future, with 70 percent feeling optimistic about the future of the country, and 62 percent saying that the country is going in the right direction. Satisfaction with the government remains strong, with approval for the work of the Prime Minister’s office and the National Assembly at 76 percent and 63 percent, respectively.

Despite the general positivity, some concerning trends are beginning to emerge. The proportion of respondents citing job creation (38 percent, up from 30 percent) and socio-economic issues (29 percent, up from 18 percent) as key priorities continues to increase, as does the proportion of people citing poor management as the top governmental failure (up five points, to 27 percent). Nix stated that, “even though the government has delivered well on anti-corruption reforms, we see signs that the population is concerned over progress in the socio-economic field.”

The Armenian populace also shows a strong interest in judicial reform and the implementation of transitional justice. Eighty-two percent think that judicial reform should be an important priority, and 60 percent want to see the creation of a transitional justice system to address everything from corruption and illicit enrichment to human rights violations and electoral fraud under the previous regime.

Of additional note for a historically patriarchal society, 96 percent of Armenians think that all forms of violence against women ought to be punishable by law, and 90 percent believe that the state should abolish laws and practices that discriminate against women.

The survey was conducted on behalf of IRI by Dr. Rasa Alisauskiene of the Baltic Surveys/The Gallup Organization, with the fieldwork carried out by the Armenian Sociological Association. Data was collected throughout Armenia between September 20 and October 13, 2019 through face-to-face interviews in respondents’ homes. The sample consisted of 1,200 permanent residents of Armenia aged 18 or older and eligible to vote. It is representative of the general population by age, gender and region. The margin of error does not exceed plus or minus three percent for the full sample, and the response rate was 66 percent. This survey was funded by the U.S. Agency for International Development.