New Poll: Germans Confident in Their Democracy; Pragmatic on Russia and Migrants 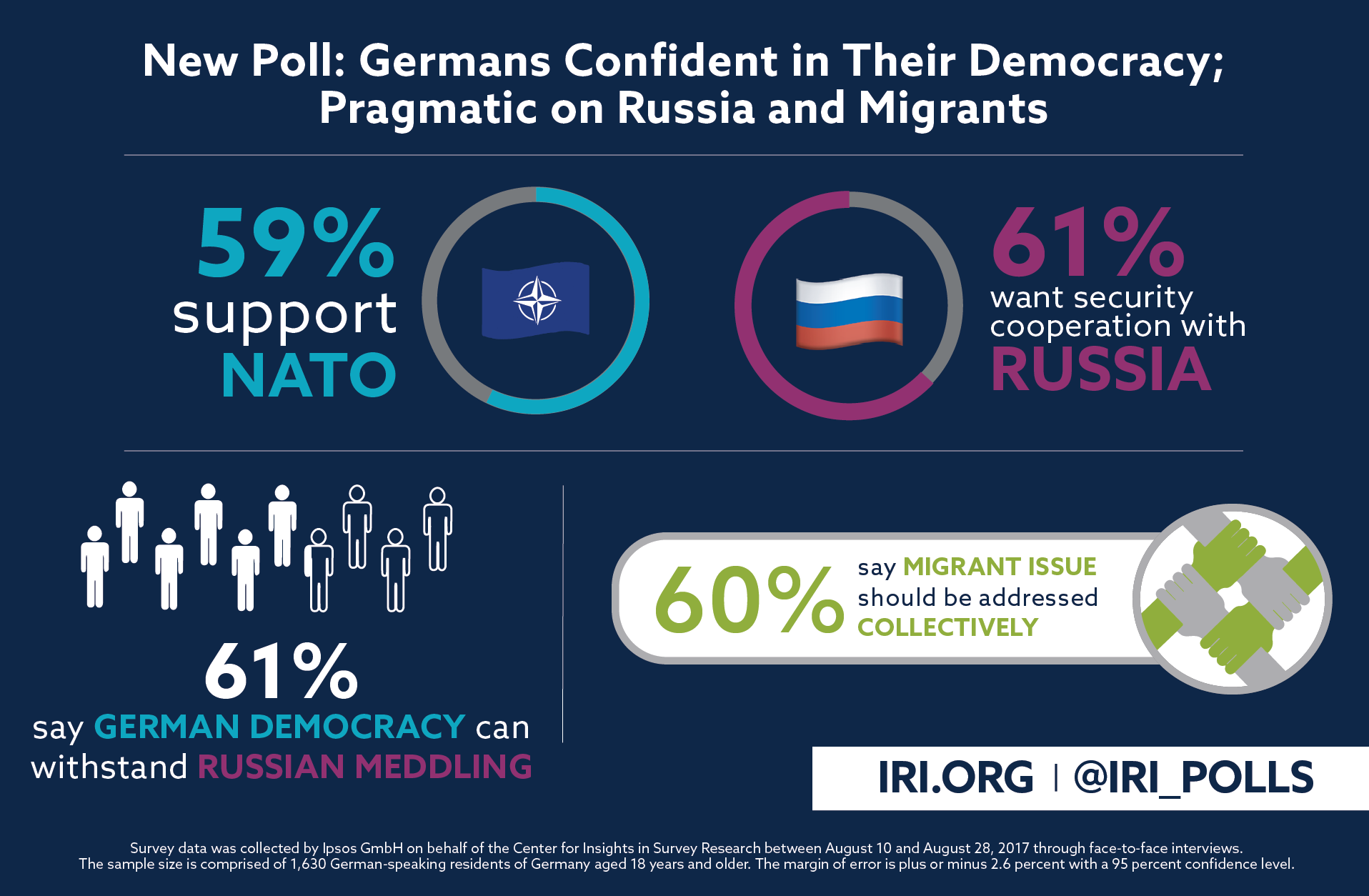 Washington, D.C.—A poll of residents of the Federal Republic of Germany released today by the International Republican Institute’s (IRI) Center for Insights in Survey Research reveals that a majority of Germans believe their democracy is strong enough to withstand Russian meddling, and take a pragmatic approach to contentious issues including migrants and relations with Russia.

“This survey paints a mostly positive picture of a robust democracy capable of responding to complex challenges without falling prey to external interference,” said IRI Regional Director for Europe Jan Surotchak. “Germans clearly wish to confront difficult issues in a cooperative, pragmatic manner, and while they recognize the challenges represented by Russia and the ongoing migrant issue, they appear confident in the resilience of their democracy.”

The survey reflects both solid support for NATO and a desire for a more positive relationship with Russia. Fifty-nine percent of Germans believe that NATO “retains a vital role in the maintenance of peace and security on the Continent,” and a combined 60 percent expressed support for sanctions imposed on Russia because of its annexation of Crimea and involvement in eastern Ukraine (46 percent “somewhat support,” 14 percent “strongly support”).  However, 61 percent also affirmed that Russia “should be considered a partner in European security and brought into European security structures.” Similarly, 61 percent favor building economic and political ties with Russia, reasoning that this would “support German jobs and exports” and avoid “conflict and war.”

Germans appear to view Russian attempts to present itself as a protector of “European values” with suspicion. A combined 74 percent say Russia is either “cynically pretending” to stand up for traditional European values (55 percent) or think that this posture “demonstrates Russia’s rejection of modern Western values of tolerance” (19 percent). Germans appear confident in the ability of their democracy to withstand Russian meddling: 61 percent say German democracy is “strong” and that Russian meddling would be “more of a nuisance than a threat.”

The sense of pragmatism pervading the poll was also reflected in attitudes towards challenges posed by the influx of migrants in Europe. Nearly 60 percent think that Germany and Europe have a responsibility to help migrants, but “only after certain steps have been taken to ensure that those migrants will not place a financial, social, or security burden on host countries.” Sixty percent say that “closing national borders is a bad idea, because no country has the ability to address the problem on its own. Instead, collective organizations like NATO and the EU must be engaged in intercepting migrants.”

Ahead of the September 24 election, more than half (54 percent) said they feel that Germany is headed in the wrong direction. This negative view was particularly prevalent among supporters of the right-wing AfD (84 percent); as well as respondents who think that the cost of taking in migrants is too high (75 percent); those who feel that globalization has very much hurt them or their family (82 percent); and residents of the former East Germany (64 percent).

Commissioned as part of IRI’s Beacon Project, this poll follows previous opinion research conducted in the Czech Republic, Slovakia, Hungary, and Poland tracking vulnerabilities to Russian soft power, disinformation, and other means of hostile influence in Europe. For more information about the Beacon Project, visit iri.org.

Survey data was collected by Ipsos GmbH on behalf of the Center for Insights in Survey Research between August 10 and August 28, 2017 through face-to-face interviews.  The sample size is composed of 1,630 German-speaking residents of Germany aged 18 years and older. The margin of error is plus or minus 2.6 percent with a 95 percent confidence level.