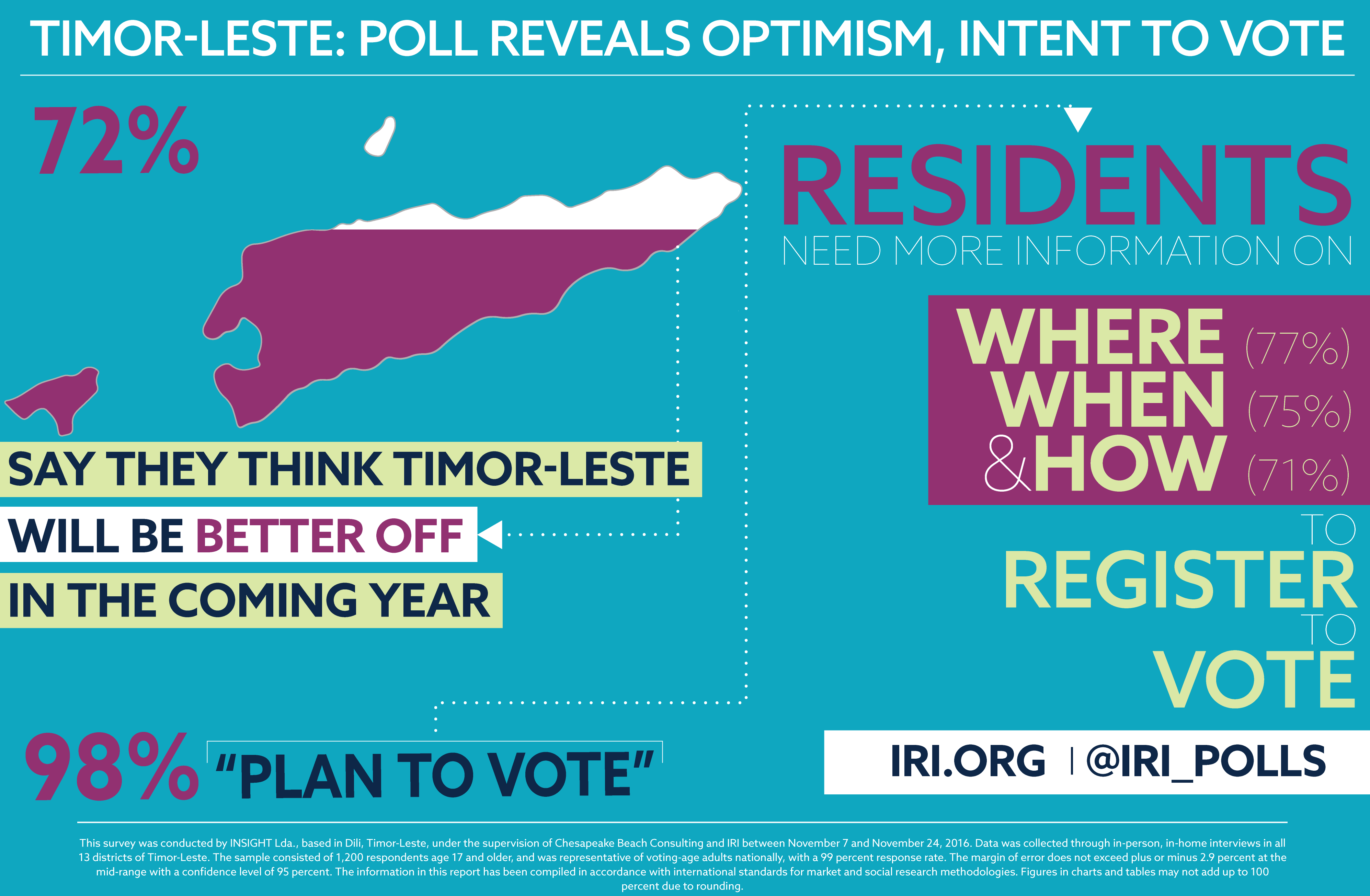 Dili, Timor-Leste—A nationwide poll released today by the International Republican Institute’s (IRI) Center for Insights in Survey Research indicates that survey respondents are optimistic about the country’s future prospects and committed to participating in the democratic process.

“The optimistic outlook and enthusiasm for democracy displayed in this poll are highly encouraging,” said IRI Regional Director for Asia, Derek Luyten. “Ahead of the upcoming presidential election, it is crucial that Timorese political leaders seize upon this popular goodwill to address the issues of greatest concern to citizens, and take steps to ensure citizens are well-informed of how and when to vote.”

The poll reflects a general attitude of goodwill towards the Timorese government: a combined 74 percent think the government is doing either a “very good” (29 percent) or “good” (45 percent) job. Forty-four percent of respondents identified themselves as either belonging to or associated with the FRETILIN party, which is currently part of the coalition government, and 75 percent have a “very favorable” view of the party.

The quality of Timorese roads ranked as the most important issue facing the country (29 percent), consistent with IRI’s previous poll conducted in October 2013 (25 percent). Only 29 percent of respondents feel the roads have improved in the past year, while 32 percent believe the roads have become worse. In comparison, a high number of respondents feel healthcare (79 percent), education (78 percent), and electricity (71 percent) have improved in the last year.

Data was collected through in-person, in-home interviews in all 13 districts of Timor-Leste.  The sample consisted of 1,200 respondents age 17 and older, and was representative of voting-age adults nationally, with a 99 percent response rate. The margin of error does not exceed plus or minus 2.9 percent at the mid-range with a confidence level of 95 percent. The information in this report has been compiled in accordance with international standards for market and social research methodologies.  Figures in charts and tables may not add up to 100 percent due to rounding.

Read the poll in Portuguese.

Read the poll in Tetun.