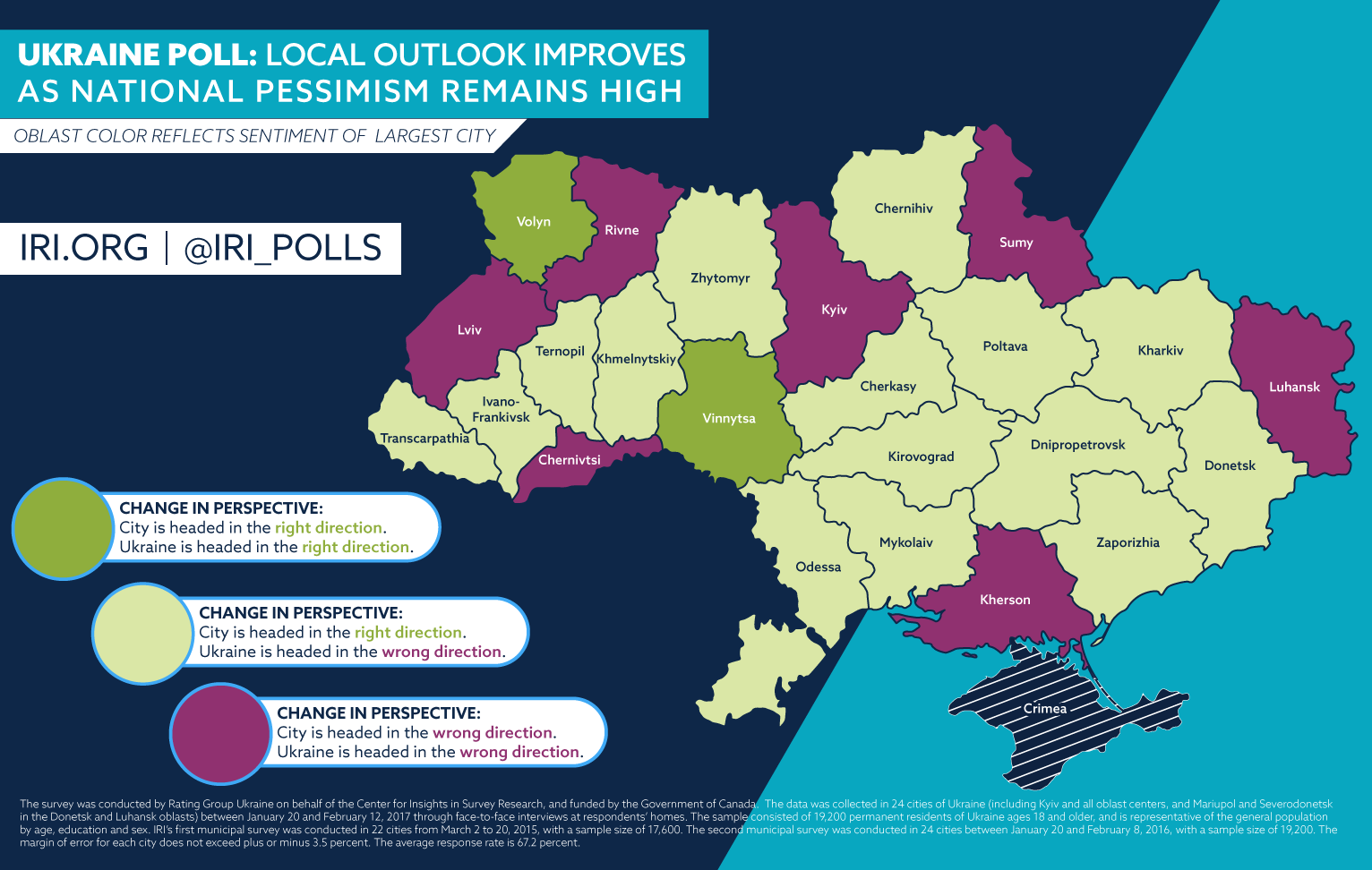 Kyiv, Ukraine—A nationwide municipal survey of Ukraine released today by the International Republican Institute’s (IRI) Center for Insights in Survey Research indicates progress on reforms on the local level, despite continuing pessimism on the national level. This poll is the third annual nationwide municipal survey by IRI, and draws from a sample of more than 19,000 respondents from 24 cities across Ukraine, including Mariupol and Severodonetsk.

“IRI’s polling data shows clear improvements in the quality of public service delivery and good governance at the local level,” said IRI Regional Director for Eurasia Stephen Nix. “While incremental progress has been made at the national level, the research shows that the most noticeable breakthroughs since Ukraine’s Revolution of Dignity in 2014 have occurred locally. These improvements underscore one of the basic principles of IRI’s work: that grassroots engagement is the foundation of a robust, participatory democracy.”

In more than half of the cities surveyed, the proportion of respondents who think things are headed in the right direction in their cities has increased since IRI’s first nationwide survey in 2015. This contrasts sharply with the majority across the board who feel that Ukraine is going in the wrong direction. Over the past three years, a majority of cities have improved their composite indicators of the quality of public goods and services, and the overall level of satisfaction with the interaction between citizens and local authorities.

While a substantial portion of respondents continue to rate corruption as a significant problem in their cities, the number has reduced by a minimum of 10 points across all cities surveyed. This represents a gradual decrease in the perceived severity of corruption at the local level over three consecutive years.

Despite this discernible progress at the local level, attitudes as a whole remain pessimistic. The data suggests that the economic crisis is still acutely felt in Ukrainian households. In all but two cities surveyed, the percentage of respondents who believe that Ukraine is headed in the right direction has decreased over the last three years. However, it is important to note that Ukrainian cities continue to show strong support for the country’s path towards European integration: in all but one city, a majority or plurality supports Ukraine’s accession into the European Union.

The survey was conducted by Rating Group Ukraine on behalf of the Center for Insights in Survey Research, and funded by the Government of Canada.

The data was collected in 24 cities of Ukraine (including Kyiv and all oblast centers, and Mariupol and Severodonetsk in the Donetsk and Luhansk oblasts) between January 20 and February 12, 2017 through face-to-face interviews at respondents’ homes. The sample consisted of 19,200 permanent residents of Ukraine ages 18 and older, and is representative of the general population by age, education and sex.