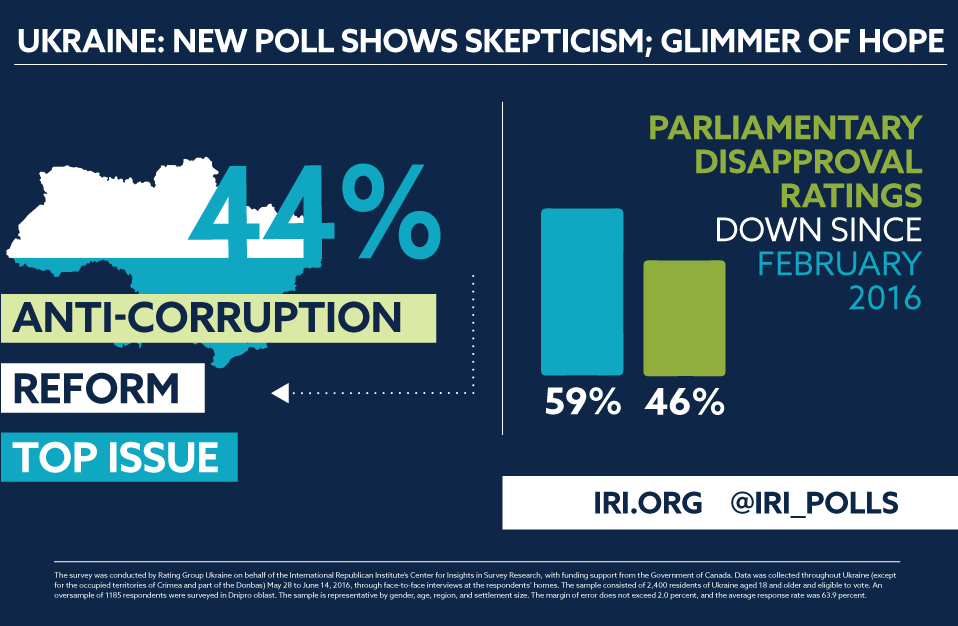 Kyiv, Ukraine – A new poll released today by the IRI revealed decreasing levels of pessimism towards Ukraine’s government in the aftermath of the change in prime minister on April 14.   However, frustration with corruption remains high and public trust in the government is low.

“It’s no secret that the Poroshenko government has faced significant challenges, but this poll – one of many that IRI has conducted in recent years – could suggest a glimmer of hope for the newly-appointed Prime Minister Hroisman,” said Stephen Nix, IRI Regional Director, Eurasia.  “The government’s decision to adopt a number of reforms, including measures to enhance judicial accountability, is a promising start. Now it must make use of this window of opportunity to ensure that these reforms are properly implemented.”

The modest decline in those that strongly disapprove of the activities of parliament, from a high of 59 percent in February to 46 percent in this poll, could represent an opportunity for continued reforms. However, Ukrainians remain skeptical at the prospect of the government bringing an end to the political crisis. When asked if a Hroisman-led Cabinet of Ministers would be able to deliver positive changes for the country, a combined 60 percent responded “somewhat” or “definitely” no, compared with a combined 20 percent who responded “somewhat” or “definitely” yes. It is worth noting that the new prime minister has made progress in forging a new, reform-minded majority in parliament.

The poll also took an in-depth look at the issue of corruption in Ukraine.  Anti-corruption reform is considered the most important priority for national authorities (44 percent), and the data reinforces the linkage between this issue and perceptions of the country’s future prospects. Forty-six percent view the abolition of immunity of parliamentarians and judges as a key indicator for the country’s progress, and 38 percent feel that a clear anti-corruption mechanism to hold officials accountable would herald a more positive trajectory.

Respondents strongly support the decentralization of power from the central government to their municipalities. This comes at a time when reforms continue to be introduced at the sub-national level with the new patrol police force and the establishment of private housing associations. This poll, which looked closely at Dnipro oblast in southeast Ukraine, saw a majority of those residents supporting the transfer of more rights from central authorities to local ones with 70 percent support. This figure is in line with the results of IRI’s June 2015 oversampling of Odessa (67 percent “definitely” or “somewhat” supportive); the September 2015 oversampling of Zakarpattia (74 percent “definitely” or “somewhat” supportive); and the February-March 2016 oversampling of Mykolaiv and Kherson (70 percent “definitely” or “somewhat” supportive).

The survey was conducted by Rating Group Ukraine on behalf of the International Republican Institute’s Center for Insights in Survey Research, with funding support from the Government of Canada. Data was collected throughout Ukraine (except for the occupied territories of Crimea and part of the Donbas) from May 28-June 14, 2016, through face-to-face interviews at the respondents’ homes.

The sample consisted of 2,400 residents of Ukraine aged 18 and older and eligible to vote. The sample is representative by gender, age, region, and settlement size. An oversample of 1,185 respondents were surveyed in Dnipropetrovsk oblast. Cities and villages were selected by means of the random sampling method. The number of selected cities/villages in each of the regions is proportional to the share of population living in cities/villages of a certain type in each region. The margin of error does not exceed 2.0 percent, and the average response rate was 63.9 percent.