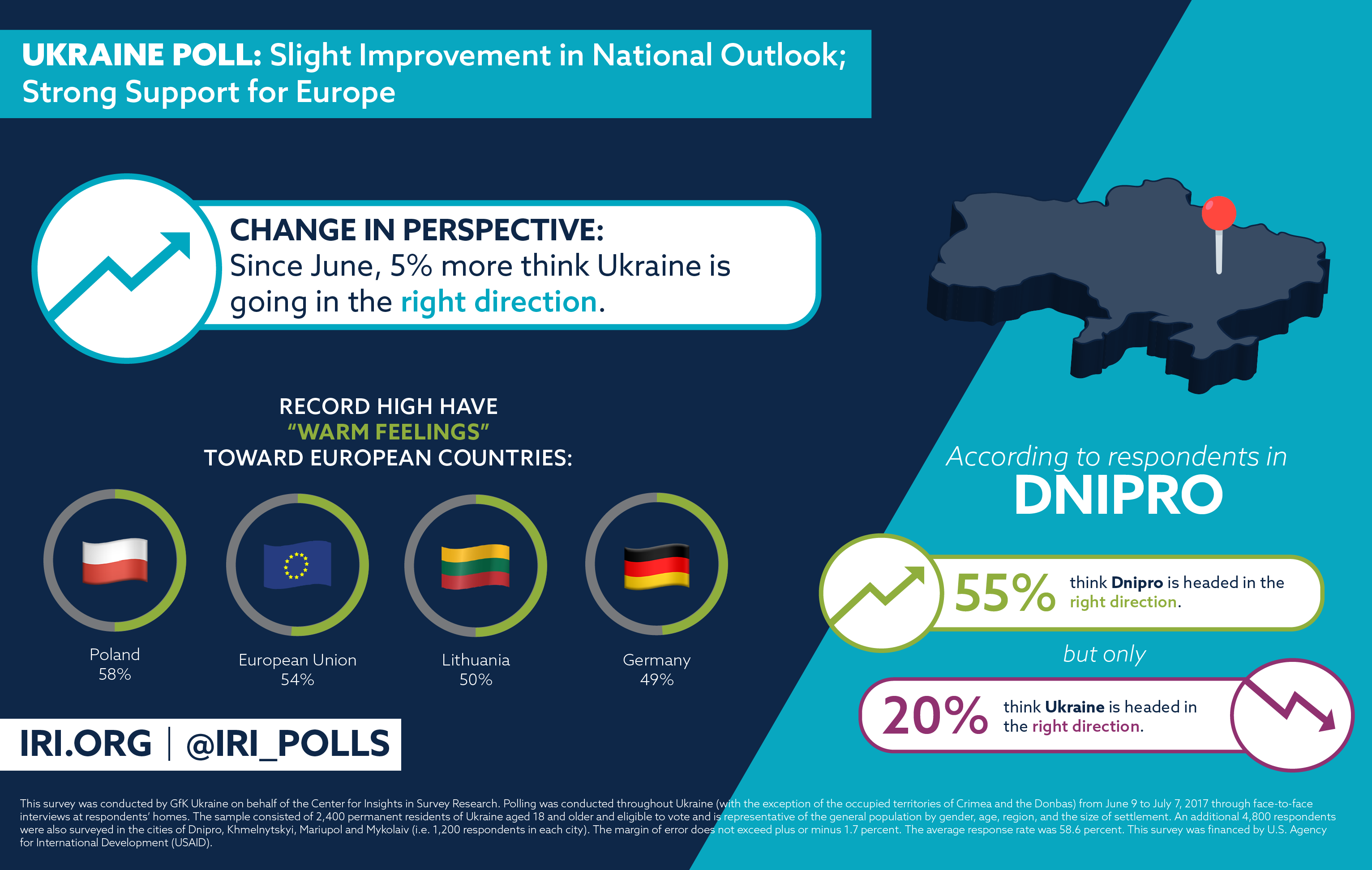 Kyiv, Ukraine—A nationwide poll of Ukrainians released today by the International Republican Institute’s (IRI) Center for Insights in Survey Research reveals a slight improvement in the public perception of the country’s direction and indicates that a majority hold favorable attitudes towards Europe. The survey also polled an additional 4,800 respondents from the cities of Dnipro, Khmelnytskyi, Mariupol and Mykolaiv to compare local-level responses with nationwide results.

“The data suggests that after three years of economic hardship and ongoing military conflict with Russia, perceived improvements in the economy and the commencement of visa-free travel to the European Union are starting to have a tangible effect on the lives of Ukrainian citizens,” said Stephen Nix, IRI Regional Director for Eurasia. “While the significance of the slight increase in those who feel the country is headed in the right direction should not be overstated, this could represent a greater sense of optimism for Ukraine’s future.”

The proportion of Ukrainians who feel that the country is headed in the right direction increased by five percent, rising to 18 percent in June 2017 from 13 percent in April 2017. Notably, attitudes on the local level are markedly more optimistic. For example, 55 percent of Dnipro residents think their city is headed in the right direction, compared to just 20 percent who think things in Ukraine are going in the right direction. “The higher level of optimism we see on the local level may relate to a trend noted in previous IRI polls indicating that Ukrainians are seeing more progress in their cities than on the national level,” Nix said.

The poll also reflected strong ties to Europe—a finding which may be tied to the recent introduction of visa-free travel to EU countries. Fifty-four percent reported having “warm” feelings towards the European Union—the highest level recorded by IRI since May 2013. Similarly, 58 percent of Ukrainians have warm feelings towards Poland, followed by 50 percent towards Lithuania and 49 percent towards Germany.

Consistent with previous polls, corruption remains a key issue of concern to a majority of Ukrainians. Fifty-one percent rate corruption within state bodies as one of the three top issues facing the country, tied with the military conflict in the Donbas (50 percent), followed by low industry production (29 percent).

This survey was conducted by GfK Ukraine on behalf of the Center for Insights in Survey Research. Polling was conducted throughout Ukraine (with the exception of the occupied territories of Crimea and the Donbas) from June 9 to July 7, 2017 through face-to-face interviews at respondents’ homes. The sample consisted of 2,400 permanent residents of Ukraine aged 18 and older and eligible to vote and is representative of the general population by gender, age, region, and the size of settlement. An additional 4,800 respondents were also surveyed in the cities of Dnipro, Khmelnytskyi, Mariupol and Mykolaiv (i.e. 1,200 respondents in each city).

The margin of error does not exceed plus or minus 1.7 percent. The average response rate was 58.6 percent. Charts and graphs may not add up to 100 percent due to rounding. This survey was financed by U.S. Agency for International Development (USAID).