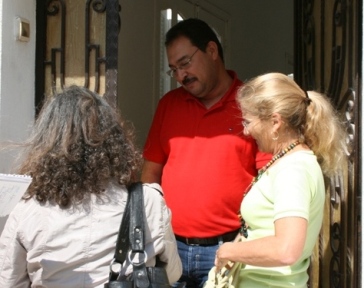 Crippling restrictions on political activities in Tunisia were lifted with the collapse of President Zine El Abidine Ben Ali’s regime.  Today the country’s political parties – along with a multitude of newly recognized political and civic groups – are building constituencies and supporting Tunisia’s democratic transition.

After the fall of the regime, members of Tunisia’s new political and civic entities were quick to realize the importance of constituent outreach.  With the support of IRI, these groups began to develop the skills needed to carryout direct voter outreach, including door-to-door campaigns.  These campaigns allow the parties to deliver their messages and hear directly from voters.  This kind of direct voter outreach is a new phenomenon in Tunisia, and party members who participated in IRI sponsored workshops originally expressed misgivings about both its feasibility and its effectiveness.  Upon completing some introductory door-to-door campaigning, however, party members began to see the technique as a unique and effective opportunity to interact directly with voters, build networks of supporters and bolster their local presence within communities.

For example, the Progressive Democratic Party (PDP) was tightly censored under Ben Ali and subject to media blackouts and slander campaigns.  By reaching out personally to potential voters, PDP members are delivering their message directly to Tunisians for the first time.  Party officials recognize that this method is a mutually beneficial learning process for the party and the electorate.

Door-to-door campaigns are also being used by new political groups to introduce themselves to voters and build a formal structure.  Members of the Republican Reconciliation Party are establishing their own grassroots networks, and have used door-to-door campaigning in the capital city of Tunis.  As the party expands its operations into the country’s provinces, it will use door-to-door campaigns as a cornerstone of its direct voter outreach programs.

Equipped with the proper tools, Tunisia’s political parties and civic groups are becoming instrumental in representing the needs and desires of the Tunisian people at all levels of government.