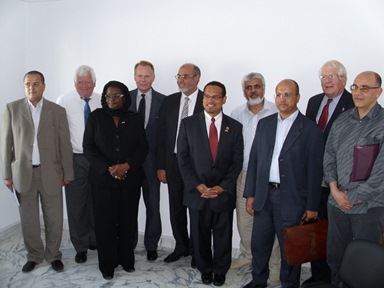 As Tunisians prepare for constituent assembly elections scheduled for October 23, 2011, a United States Congressional delegation visited the country to see first-hand the changes that have arisen in the Middle East and North Africa following the Arab Spring.  During their trip, IRI hosted the delegation for meetings with Tunisia’s political leaders and candidates running in the elections.

During the meeting, the Tunisian party leaders expressed their excitement for their country’s first democratic elections.  They discussed the changes and challenges they are facing during the transition – a lack of elected institutions, fears of instability and its effects on the economic and political future of Tunisia.  They stated that international and domestic observation will be crucial for the credibility and transparency of the elections, and that they welcome the assistance of IRI, the American people and the international community during this historic period.

HDP is a bipartisan commission of the U.S. House of Representatives that works with partner legislatures around the world to support the development of effective, independent, and responsive legislative institutions.  The meeting with Tunisian party leaders served as an introduction to some of the people and organizations that will play an important role in the constituent assembly and the production of a democratic constitution for Tunisia.