Putting the Western Balkans Back on Track

When Tim Judah, the well-known British journalist and writer, coined the term Yugosphere in 2009, alluding to the joint economic and cultural space of countries once belonging to former Yugoslavia, he received fierce condemnation from nationalistic circles, who refused to be described by anything even remotely resembling the “dreaded” Yugoslavia.

Yet it is an undeniable fact that the countries forming the area today known as the Western Balkans have much more in common than some ardent nationalists would ever admit. Despite the bitter history of the 1990s conflicts and the immense socio-economic transition that these societies have gone through in the last two and a half decades, the economic and cultural connections, as well as language similarities cannot be ignored.

These links and similarities also mean that countries of the region share almost the same challenges when it comes to major security and political concerns. This is especially evident today when the region is once again caught in a geopolitical game of chess between major world powers.

At first glance, the situation looks crystal clear. All countries in the region are, at least publicly, on the path towards European Union membership, with the idea that they should be able to resolve much of their disagreements under the Brussels umbrella. Additionally, these states are optimistic that by becoming member states their economies will attract more foreign investment. Most of these countries, except Serbia, also publicly desire to join NATO, intentions which received a significant boost after Montenegro acceded to the Alliance in June. However, things are much more complicated beneath the surface. After a string of internal issues within the Union (i.e., Brexit, disagreements over the migrant crisis), enthusiasm for EU enlargement has largely faded in many current member states. Instead of embracing the prompt accession of its Western Balkan neighbors, Brussels is now playing the delay game by sending mixed messages. Specifically, Brussels states that the region’s future lies in the EU, but that the accession process will be long and complicated. Dwindling support for enlargement among EU member states has been accompanied by a proportional rise of so-called Euroskepticism among candidate countries.

Public opinion polls, including IRI polling in Macedonia and Serbia, are showing that support for EU accession is gradually dropping as more and more people lose faith that their respective nations will manage to fulfill the ever-demanding Brussels criteria. These trends are being followed by increasingly emboldened calls to search for better and more viable partnerships elsewhere in the world.

These calls for “alternative” foreign policy preferences are of course not some product of spontaneous reaction against Brussels’ wrongdoings but are the result of a carefully crafted and financed campaign by the Russian Federation. Moscow is not hiding its objection towards the integration of the region into the EU, and especially into NATO, perceiving such development as a direct threat to its national interests.  The Kremlin is now openly pressuring countries to abandon the Euro-Atlantic integration process, offering in return economic and military support. While this operation has been checked in Montenegro following its recent entry into NATO, it continues through support for sympathetic political parties and organizations, and through a comprehensive disinformation campaign aimed to raise anti-western feelings among the population.

Additional challenges such as violent extremism are also threatening regional stability. Some reliable estimates claim that around 1,000 foreign fighters from the region (mainly from Kosovo and BiH) have joined the so-called Islamic State (IS) in Syria and Iraq. While this number has significantly declined in the past two years, a clear and present danger still exists, if not from direct terrorist attacks, then in the form of silent, non-violent radicalization of parts of the Muslim population. Such radicalization is conducted by proselytism efforts of unofficial missioners trained in some Gulf countries.

This issue has an additional, more political agenda in Bosnia and Herzegovina, where there are differing interpretations of the seriousness of this situation. Grave warnings have come from some European officials, such as the Czech President Milos Zeman (“IS can create a base in Bosnia”) and Croatian President Kolinda Grabar-Kitarovic (“Thousands of IS fighters are returning to Bosnia”). Others completely dismiss these claims, including leaders of the Bosnian Muslim communities, who say that such statements are a blatant distortion of reality, and are in its essence, “a xenophobic and Islamophobic campaign against Bosnian citizens of the Muslim faith.”

While the actual situation is hardly as dramatic as Croatia’s president is claiming (around 50 IS related fighters returned to BiH according to official data from the BiH Ministry of Security), it would be dangerous to ignore or oversimplify the issue. This is the main reason the International Republican Institute is addressing these problems through the work of its Regional Task Force, an informal coalition of MPs, academic experts, journalists and CSO leaders, who all share personal and professional interest in these topics.

Through the extensive usage of IRI’s public opinion surveys and social media research, the Task Force is analyzing these issues and trying to offer solutions that can be adopted in their respective countries. One of the main findings from the recently held Task Force meeting in Sarajevo is that a more robust and timely approach is needed to produce concrete and realistic counter-narratives to these tendencies and to help countries in the region re-strengthen their resolve to become members of the Euro-Atlantic community of nations. 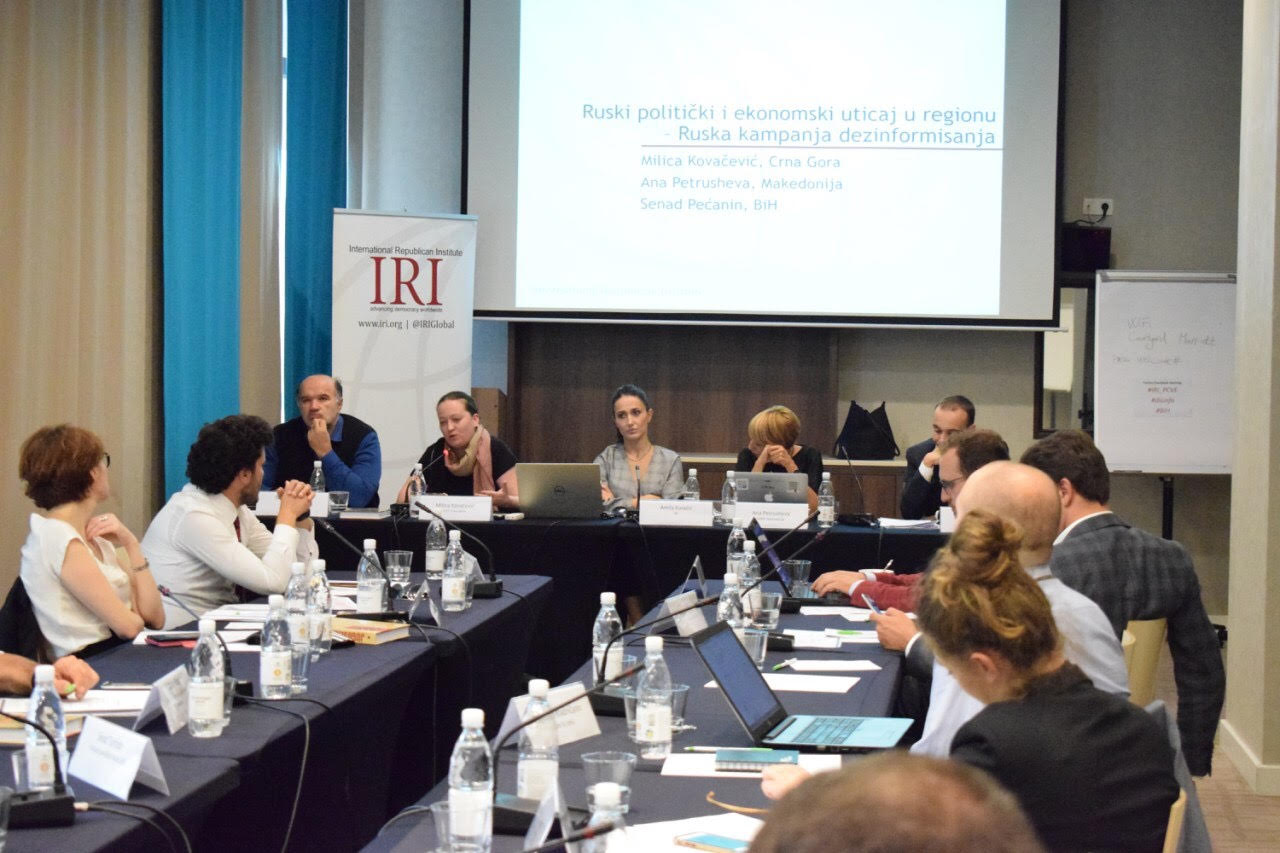