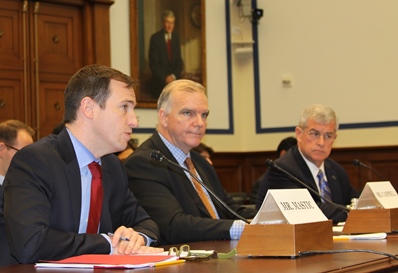 In his testimony, Mastic outlined the key factors to Tunisia’s transition either successfully moving forward, or going in a less-optimal direction.

The first factor Mastic highlighted was the political track of the national dialogue, stating, “Key actions related to the ultimate passage of a constitution, an electoral law and appointment of an electoral commission extend from the dialogue’s success but ultimately none of these important benchmarks will be achieved unless the political parties agree on a caretaker prime minister and government that can shepherd the country to elections.”

Noting the assassinations of Choukri Belaid in February 2013 and Mohamed Brahmi in July 2013, Mastic discussed the second factor – the security situation in the country and the ongoing concern of citizens.  “These acts of terror have produced a growing sense of unease among Tunisians and perhaps most damaging have contributed to polarization between Islamists and secularists with the latter believing the Ennahda-led government has been too slow to recognize the threats posed by jihadists.”

The third factor highlighted was the willingness of Tunisians to have patience with their political leaders and the transition.  “The patience of ordinary Tunisians directly relates to the state of the country’s economy and the sense that the transition offers at least the promise of economic betterment in the near term, which was a key driving force behind popular unrest seen in multiple Arab countries during the past three years.”

In concluding Mastic noted to the committee of how important Tunisia’s successful transition is to the Arab region.  “It is by no means certain that Tunisia will reach the point of consolidated democracy, and we should not be naïve about the considerable challenges that lie ahead.  The country is at a pivotal moment presently and must successfully meet the key goals of the current national dialogue if it is to move ahead on achieving necessary electoral and governance milestones.  Yet even as the current dynamic is uncertain, Tunisia is, after all, where the Arab Spring began.  I believe Tunisia remains the best hope for a democratic political transition in the Arab world.”