Chișinău, Moldova—A new nationwide poll from Moldova released today by the International Republican Institute (IRI) reveals that attitudes towards government are stabilizing, though Moldovans remain pessimistic about the country’s trajectory.

“The presidential election in November 2016 appears to have improved public attitudes towards the country’s future,” said Stephen Nix, IRI Regional Director, Eurasia. “It is crucial that the government take advantage of this window of opportunity to address the very serious problems facing the country, including high levels of corruption and dissatisfaction with the economy.”

Despite this apparent improvement in the national mood, corruption continues to rank as a top concern for Moldovans. A staggering 94 percent of respondents cite corruption as a “very big” (75 percent) or “big” (19 percent) issue. Twenty-five percent believe that corruption is “most present” among public servants, including doctors, teachers and policemen, and nearly one-third admit to having paid a bribe, given a gift or done a favor in exchange for a service in the past 12 months.

Economic anxieties also emerged as a consistent theme. Thirty-five percent identified unemployment as one of the most important problems facing Moldova, and 49 percent cite low income and/or financial problems as the most important problem facing their household. However, there was a slight improvement in the economic outlook in Moldova: while only a combined 17 percent believe the economy has improved, this figure increased by 10 percent from September 2016. Similarly, the number who feel the economy has “stayed the same” rose from 25 percent in September 2016 to 35 percent, and those who think the economy has “worsened a lot” decreased from 35 percent in September 2016 to 15 percent. 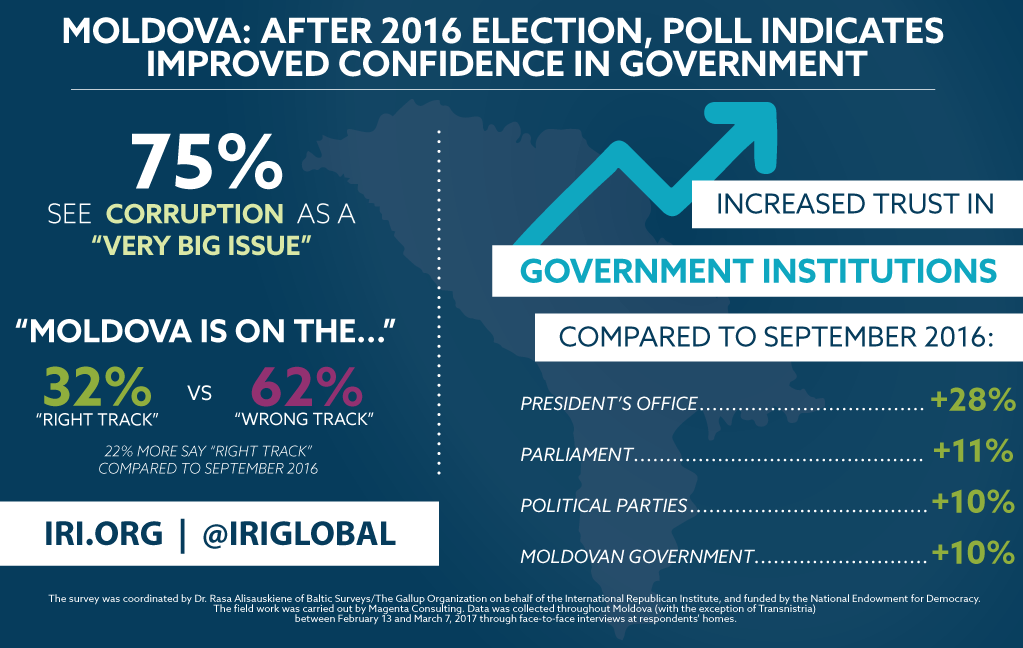 The survey was coordinated by Dr. Rasa Alisauskiene of Baltic Surveys/The Gallup Organization  on behalf of the International Republican Institute, and funded by the National Endowment for Democracy.  The field work was carried out by Magenta Consulting. Data was collected throughout Moldova (with the exception of Transnistria) between February 13 and March 7, 2017 through face-to-face interviews at respondents’ homes.

The sample consisted of 1,510 permanent residents of Moldova older than the age of 18 and eligible to vote, and is representative of the general population by age, gender, education, region and size of the settlement. The response rate was 67 percent. The margin of error does not exceed plus or minus 2.5 percent, and charts and graphs may not add up to 100 percent due to rounding.