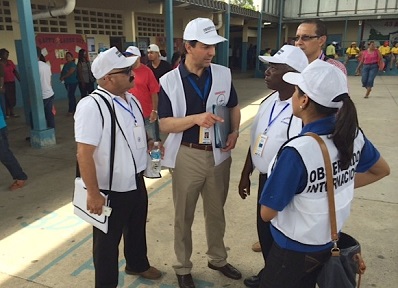 Panama City, Panama – IRI election assessment delegation found that Panama’s May 4, 2014 general elections met broadly accepted international standards and appears to have accurately reflected the will of Panamanian voters.  The elections represent another step in consolidating the country’s record of periodic, open and transparent elections since the restoration of democracy in 1989.

Based on the reports of IRI’s observers, Panama’s electoral authorities administered the process in an effective and efficient manner, testing innovations, such as the use of an electronic voting machine in one precinct and arranging for internet voting for Panamanians living overseas.  The government of Panama, and specifically the Electoral Tribunal, welcomed both domestic and international observers.

IRI found that the campaign period was generally competitive, with four political parties participating with candidates and three independent candidates running for president for the first time.  Moreover, Panamanian civil society organizations played a greater role in scrutinizing the electoral process over a longer period than in the past.

On Election Day, the delegation was particularly impressed with the dedication of Panamanian voters who turned out in historically large numbers (75 percent of the electorate) and stood patiently in line to exercise their civic right to participate in the political process.  At voting centers observed by IRI’s assessment delegation, the process appeared organized, calm and somewhat festive.  Overall, election officials seemed well trained and knowledgeable in their duties.  The Electoral Tribunal’s efforts to provide comprehensible voter education and election official training materials helped.

Though observers noted complaints of vote buying before and during Election Day and incidents of assisted voting in cases involving the disabled and elderly, they did not seem to be of the scope or severity that would call into question the legitimacy of the process or outcome.  It is noteworthy that only the three major political parties had enough poll watchers to observe voting at most of the country’s 6,330 voting tables.

During the closing procedures and ballot counting, the arrangement of the voting centers, which were mostly located in public schools, allowed for rapid vote counting and transmission of results to national electoral authorities in the capital.  Although the public is not permitted inside the rooms where voting tables are located after the polls close, citizens may witness the ballot count and tally through windows and open doors, guarded by police.  Polls closed at 4 pm and, by midnight, most of the preliminary results were in.  There was a marked tendency in the presidential race and losing candidates accepted defeat.

Despite the positive elections, there are legacy issues surrounding the campaign and electoral system that need to be addressed, such as the use of public resources for partisan purposes, campaign rules that are routinely broken or candidacy qualifications that require interpretation, and the repeated complaints of vote buying.  Additionally, most voting centers lack easy access for the disabled.

Panamanians need a system based on rules and institutions that citizens can trust.  The incoming administration and congress should promote a series of electoral reforms, such as a campaign finance law to disclose the origin of contributions and prevent the use of public funding to produce partisan propaganda.  A clarification is needed on rules governing the participation of a sitting president and other public officials in political campaigns and clarification concerning family members as candidates for succeeding office.  In addition, laws against vote buying should be strengthened and more effectively enforced and greater effort needs to be made to make voting centers handicap accessible.

In addition to fielding a delegation to assess the elections, IRI partnered with the Comisión Justicia y Paz (Justice and Peace Commission), a Panamanian civil society organization with a respected history of observing elections, to recruit and train 2,000 local observers.  Those local observers were deployed throughout Panama on Election Day to monitor the process.

IRI’s assessment mission was funded by the U.S. Department of State’s Bureau of Democracy, Human Rights and Labor.