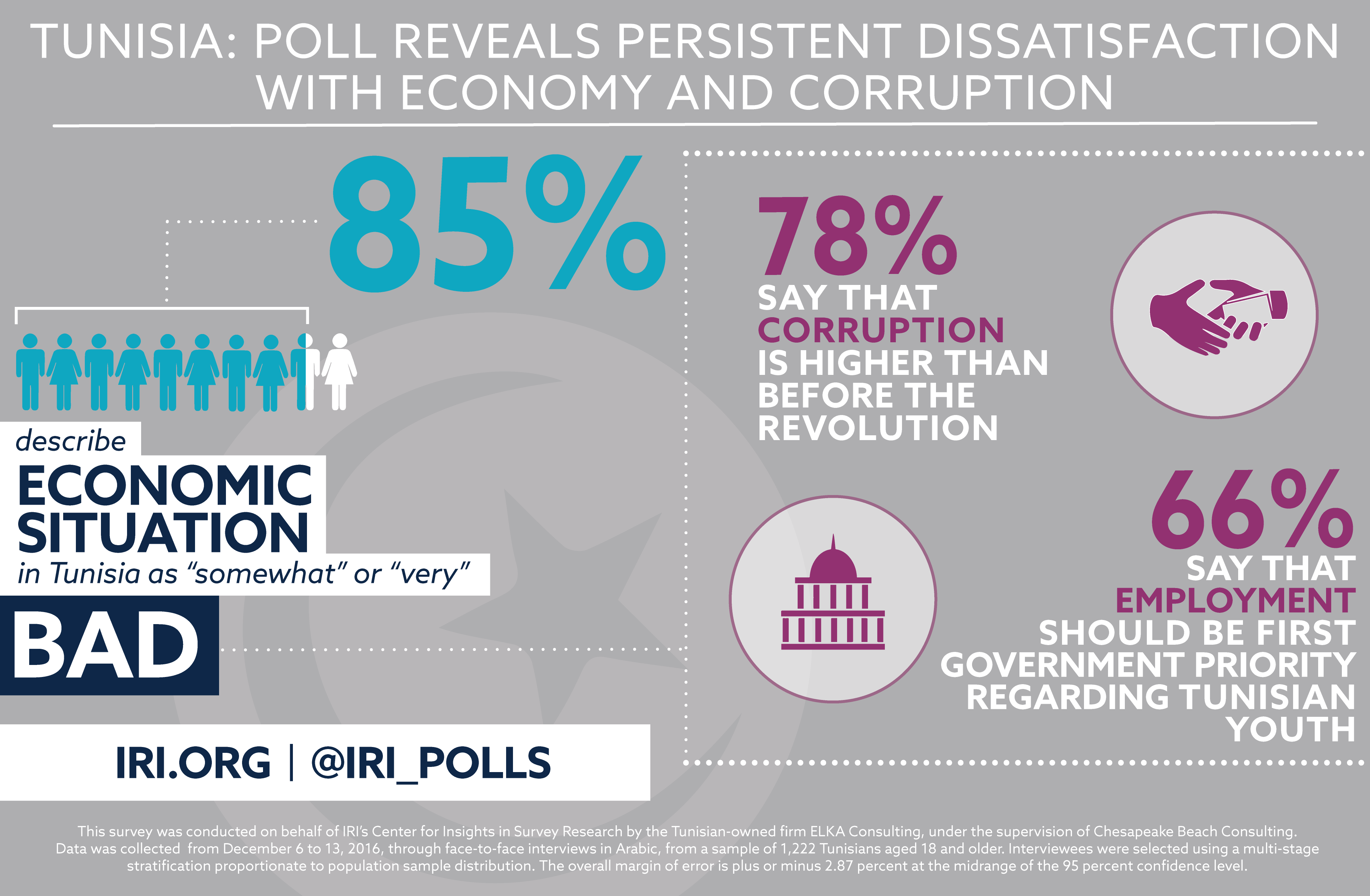 “Consistent with our previous surveys, frustration with Tunisia’s economy and a perception of rampant corruption remain key challenges for the new government,” said IRI Regional Director for the Middle East and North Africa, Scott Mastic. “As the country marks the sixth anniversary of its democratic revolution, the government must recognize that Tunisia’s continued progress depends on its ability to deliver meaningful economic and anti-corruption reforms.”

A combined 85 percent of respondents describe Tunisia’s current economic situation as either “somewhat bad” or “very bad” (38 percent and 47 percent respectively). Thirty-two percent think that employment should be the government’s top priority, and 66 percent suggest that employment should be the government’s first priority regarding Tunisian youth. A combined 61 percent also believe that the government is not promoting policies that help youth (28 percent “mainly no” and 33 percent “not at all”). This issue has assumed greater importance given the vulnerability of that demographic to violent extremism.

Corruption emerged as a continuing problem, with 78 percent reporting that the level of corruption is higher than before the 2011 revolution, which was initially sparked by frustration with widespread corruption. While 48 percent of respondents prefer democracy to other forms of government, the number of respondents who describe prosperity as “definitely more important to me” than democracy jumped from just 18 percent in May 2016 to 50 percent in December 2016.

This survey was conducted on behalf of IRI’s Center for Insights in Survey Research by the Tunisian-owned firm ELKA Consulting, under the supervision of Chesapeake Beach Consulting. ​ Data was collected between December 6 to 13, 2016, through face-to-face interviews in Arabic, from a sample of 1,222 Tunisians aged 18 and older. Interviewees were selected using a multi-stage stratification proportionate to population sample distribution. ​ The overall margin of error is plus or minus 2.87 percent at the midrange of the 95 percent confidence level.  Figures in charts and tables may not add up to 100 percent due to rounding.