Why Don’t Tunisians Know Their Rights?

Over the past eight years, Tunisia has made notable progress on social and political issues. In 2016, Tunisia adopted a revised Code of Criminal Procedure (CCP) to guarantee broad due process and fair treatment for detainees. However, qualitative public opinion research released today by IRI’s Center for Insights in Survey Research indicates that many Tunisians do not understand their rights under the law or feel that they are safeguarded under the landmark reforms  (Read the report in Arabic here).

Focus groups convened by IRI investigated citizen awareness of the revised CCP. Discussants were selected from the communities most at-risk of detention and abuse while in custody, including youth, women, members of the lesbian, gay, bisexual, transgender and intersex community and persons with disabilities, and the communities that work with marginalized groups in the justice reform area, such as lawyers and civil society activists, from across eight governorates.

The reforms grant anyone in police custody the right to counsel while detained, reduce the maximum period of pre-charge detention from 72 to 48 hours, require the police to obtain an “authorization of arrest” from a public prosecutor before taking suspects into custody, and oblige law enforcement to inform suspects of their right to a medical examination while in detention.

“Despite groundbreaking reforms designed to respect and protect the rights of Tunisians, our research suggests that Tunisians do not fully understand the revised criminal code and the new protections from abuse it affords,” said Brian Braun, IRI Program Manager for the Middle East and North Africa. “The overarching perception is that the government is not promoting awareness about reforms to prevent abuse.” 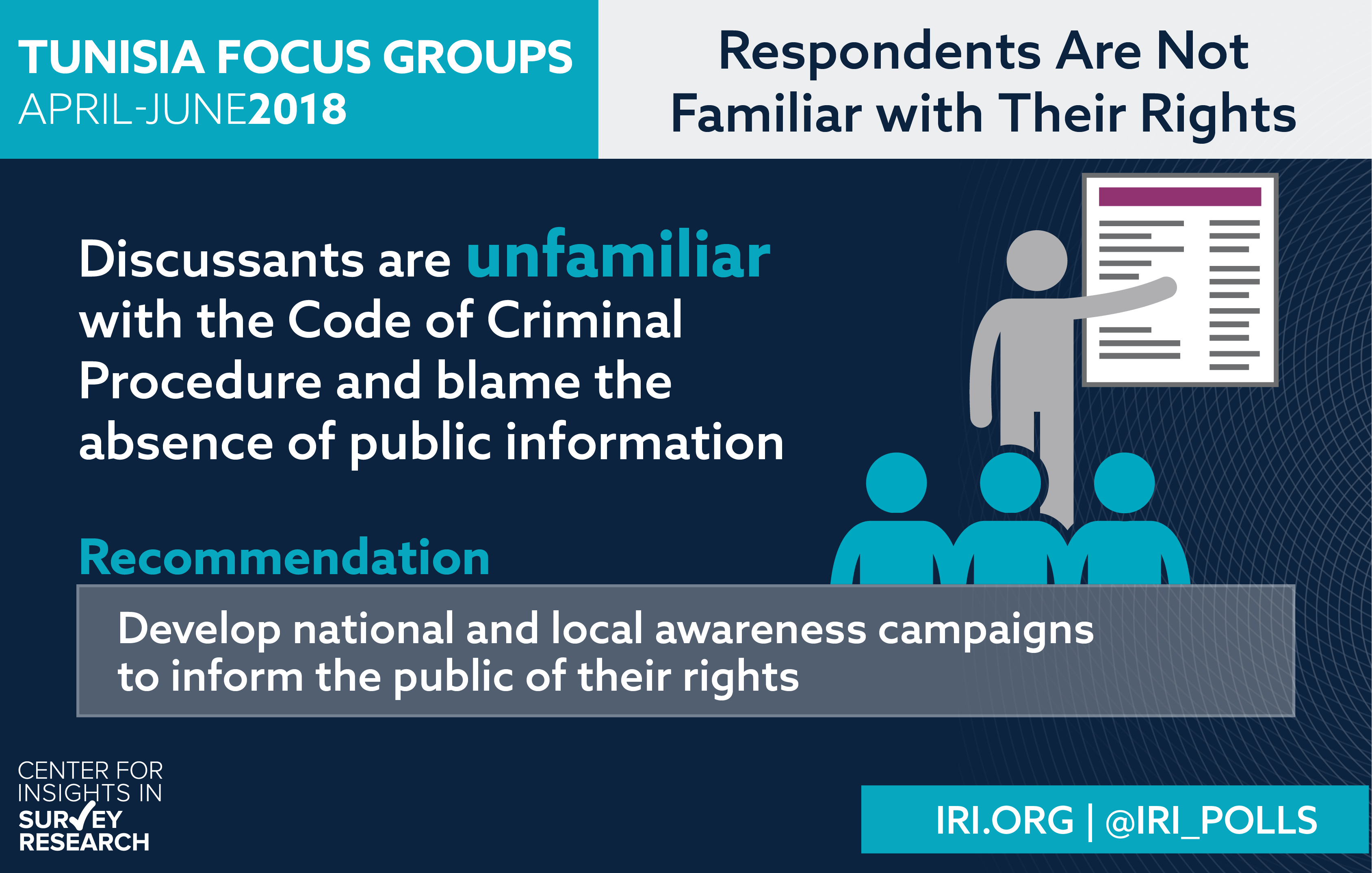 In addition to the lack of familiarity with the code, focus group discussants believe the law is applied unevenly and that inconsistencies between the legal letter of the law and the prevailing practice contribute to poor implementation, including keeping detainees in custody longer than legally admissible. Most focus group discussants hold the police primarily responsible for violations of the CCP, in part due to lack of proper training on the provisions of the law, although judges and the attorney general are also failing to ensure the law is followed properly. The discussions suggest that little effort has been made to adequately train law enforcement on the CCP and safeguard new protections for detainees.

Our research also indicates deep-rooted distrust of law enforcement officials and skepticism surrounding the process for reporting unlawful treatment. In several instances, discussants reported examples in which the police misrepresented or omitted important facts in reports, including instances of physical abuse while in police custody. Some discussants also expressed doubt about the impartiality of judges. According to one lawyer, “The judiciary is an accomplice with the abuses.”

Report findings will inform awareness and accountability campaigns conducted by IRI’s local civil society partners, as well as improve government and civil society outreach to groups most susceptible to arrest and mistreatment.